“Expulsion of the Money-Changers from the Temple,” 1675, Luca Giordano. Oil on Canvas, 78 inches by 103 inches. Hermitage Museum. (Public Domain)

The Italian painter Luca Giordano working in the late 17th century was misunderstood in his time.

Giordano became a very successful court painter for the Spanish king Charles II. He was known for painting very quickly and was able to complete large frescoes in a short period of time.

According to the Prado Museum, Giordano’s ability to imitate styles and finish paintings quickly resulted in two prejudices toward his paintings:

“The first was an association of his surprising speed as a painter with the idea that his work was somehow superficial … The second stemmed from his striking capacity to imitate other artists’ styles, which led him to be considered a mere copyist of famous painters.”

It wasn’t until the 20th century that Giordano was again appreciated as an accomplished painter worthy of praise.

Jesus and the Money-Changers

One of Giordano’s well-known paintings is “Expulsion of the Money-Changers From the Temple.” This painting represents the moment in the Bible in which Jesus expels business transactions from the temple during Passover. Matthew 21:12–13 NIV tells the story as Jesus entered the temple courts and driving out all who were transacting business there. He turned over the money-changers’ tables, and “‘It is written,’ he said to them, ‘My house will be called a house of prayer,’ but you are making it ‘a den of robbers.’”

Jesus behaved harshly. John 2:13-15 NIV tells the sets the story right before Jewish Passover, when Jesus went up to Jerusalem. In the temple courts, some were selling animals, and others were exchanging at money at tables. Jesus made a whip out of cords, and “drove all from the temple courts, both sheep and cattle; he scattered the coins of the money-changers and overturned their tables.”

Here, Jesus reacts in an aggressive way toward the buyers and sellers, certainly uncharacteristic of how Jesus is typically portrayed.

Giordano depicted the very moment that Jesus drove out the money-changers. He holds the whip made of cords in his right hand and appears to lunge toward the money-changers. The money-changers flee while their tables overturn. Figures in the background appear to watch. The sun is on the horizon and dark clouds are at the top of the picture plane. Giordano chooses to depict the scene outside, instead of inside of the temple.

Giordano uses compositional elements to make Jesus the focal point of this painting. First is contrast: Jesus is the figure with the highest contrast between dark and light, which draws our eye back to Jesus despite other items in the painting that may grab our attention.

Next are diagonals: The edge of the cast shadow on the wall behind Jesus is a diagonal that leads to the back of Jesus’s neck. The diagonal of the side of the overturned table at the bottom right of the picture plane points toward Jesus’s face.

The last element that draws our eyes to Jesus is the lines of sight: The figures surrounding Jesus turn and look at him. Giordano frames the picture plane with figures that look at Jesus, and this helps us to return to Jesus no matter what element may catch our eye. 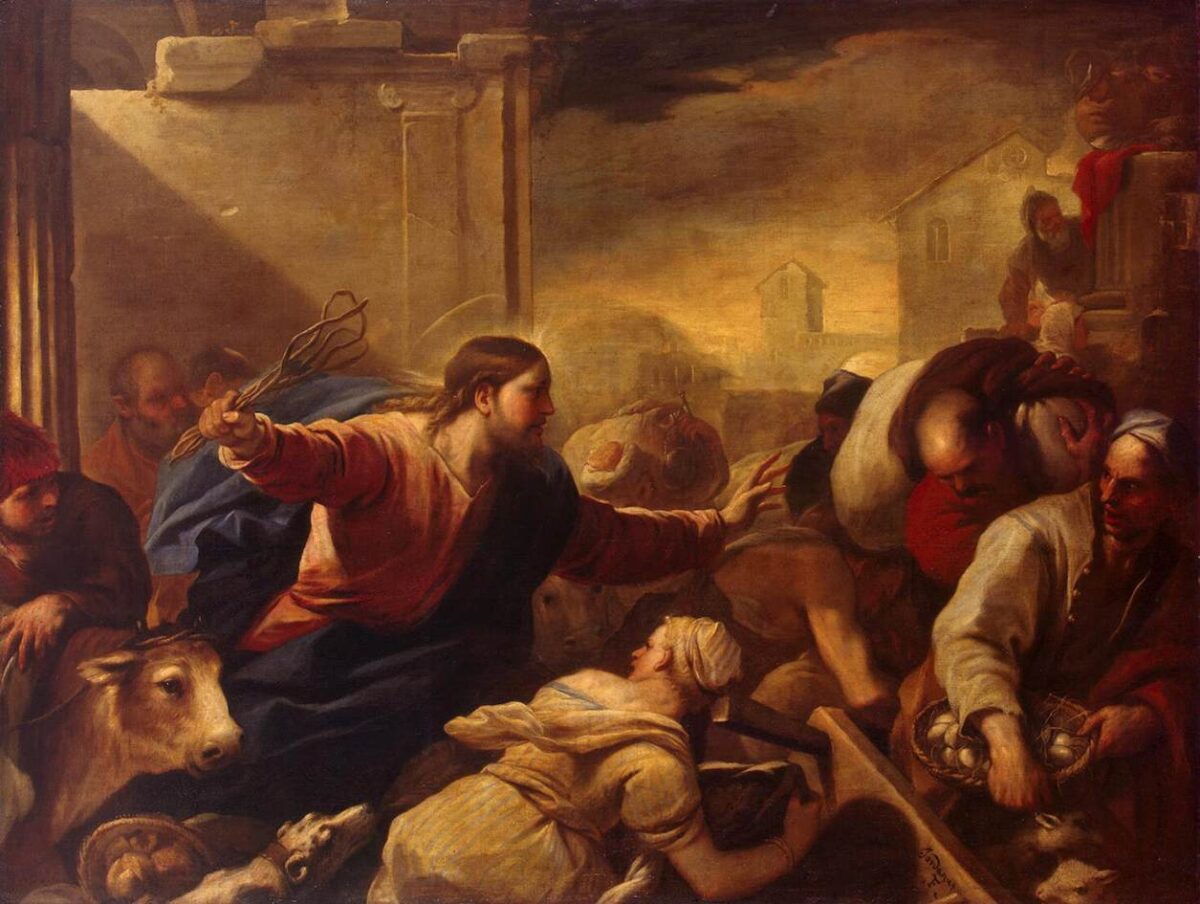 There may not be absolute answers to these questions, but allow me to offer an interpretation. It is necessary to first ask: What is God’s temple?

1 Corinthians 3: 16–17 NIV  states: “Don’t you know that you yourselves are God’s temple and God’s Spirit dwells in your midst? If anyone destroys God’s temple, God will destroy that person; for God’s temple is sacred and you together are that temple.”

Jesus expelled the buyers and sellers and overturned the tables that held their wares. Buying and selling desacralized the temple. The money-changers misused Passover and turned it into an event from which they could profit instead of recognizing it as a sacred event. Commandeering the celebration of God’s Spirit for personal gain was going too far for Jesus.

We can be tempted by worldly goods and material possessions. If we become too concerned with material things, we too can forget that our existence is sacred—sacred because of what dwells within our temple: God’s Spirit.

Sometimes, we have to be able to say when enough is enough. We have to rid ourselves of those things that prevent us from being worthy of being a place where God’s Spirit can dwell and be welcomed.

Preparing our temple to be worthy of God’s Spirit may take a certain degree of aggressiveness on our part. This aggressiveness need not be directed toward other human beings but toward the selfish states and destructive attitudes that prevent us from recognizing our own sacredness. In the process, what we overturn and expel is our selfishness so that our temple is a “house of prayer” instead of a “den of robbers.”

Did Giordano depict Jesus expelling the money-changers from outside the temple instead of from inside to reinforce the idea that the money-changers should not be doing business in the temple in the first place? Would it be respectful to depict the actual violation of God’s Spirit in the temple? As I see it, the inside of the temple, as a dwelling for God’s Spirit, should always be separated—even in a depiction—from that which would desacralize it. By painting the scene outside instead of inside the temple, Giordano is reinforcing the temple as a space without selfishness.

But why does Giordano make Jesus such a strong focal point? Is he telling us that only Jesus matters over material temptations? Then what does Jesus embody?

If we are using our temple to selfishly acquire worldly goods, it becomes difficult to claim we are loving God with all of our heart, soul, and mind; it is difficult to recognize the holiness of our existence. We are instead disrespecting ourselves by mistaking our self-worth for worldly goods. What can be further from loving ourselves?

To love oneself requires loving God with all one’s heart, soul, and mind. How else can one be a temple in which God’s Spirit dwells? How else is one welcoming to God’s Spirit? By doing so, we recognize not only that our own existence is sacred but also that our neighbor is a temple in which God’s Spirit dwells. To love one’s neighbor is to also love the temple of God and thus to love God. This is why the second great commandment is “like” the first.

Giordano’s painting reminds me to keep selfishness away from my temple, so that I come to gather a deeper understanding of my own sacrality in my ever-constant proximity to God’s Spirit. It reminds me to make my temple welcoming and hospitable to that Spirit and to expel anything that would make my temple otherwise; it reminds me to love not only my temple but the temples of others.