When you think of the Renaissance, you likely first think of Michelangelo or da Vinci, perhaps the Golden Ratio, and one city in particular—Florence. But what you may not know is that artisans to the north were in many ways setting a standard that their Southern European brethren would covet and emulate. 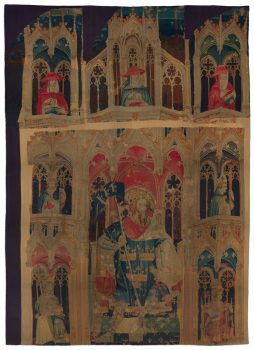 “There is a whole aesthetic in [Northern Europe] which is perceived as the epitome of good taste, princely elegance, a royal style that is setting the trend,” said Metropolitan Museum of Art curator Elizabeth Cleland by phone. The reason for the North’s influence on the South can be pinpointed to  one particular luxurious art form.

“In the 15th and 16th century, [tapestries] were the most treasured of art objects,” Cleland says. Great Italian art collectors like the Medici, France’s Dukes of Burgundy and later Louis XIV, the Spanish Habsburgs, and English monarchs were all “ looking north of the Alps… [as] the ones who are laying the trail of taste.”

Cleland is currently hosting a three-part talk on Oct. 11, 18, and 25 at The Met on the traditional history of European tapestry, from the Middle Ages to modern day. The first talk was titled “Medieval to Renaissance: Magic, myths, moralities, and mille-fleurs,” exploring the era of the art form’s pinnacle.

“I would say Brussels in the 16th century is the absolute epitome of the art,” Cleland says.

She admits, however, that some historians believe that top distinction belongs to tapestries made by  Louis XIV a century later, when he established the Royal Manufactory of the Gobelins.

But there is agreement that tapestries shaped the entire Golden Age and, consequently, Europe and the Western world for centuries to come. The reasons for this art form’s greatness is multifaceted, with layers of richness—from its expensive, shimmering materials and surface beauty, to a divine message and essence hoping to align a ruler and his domain with a heavenly one. 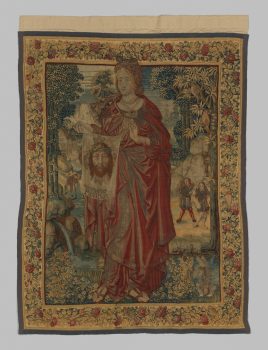 In the 15th and 16th centuries in Northern Europe, wall paintings, stained-glass windows, and tapestries were the media for large-scale figurative art meant to beautify both the inner and outer worlds of the ruling class.

“The appeal of a lot of figurative sacred art throughout Europe, not just tapestries but across different media, is the spiritual advantage of owning representations of the deity and the Holy Family and the saints,” Cleland says. “The opportunity to contemplate them, to think about the biblical narrative, to pray to them on a daily basis … there was a widely held belief that that would actually help pave the way to heaven.”

Tapestries, however, had certain practical advantages that made them even more valuable. Firstly, in the chilly North, tapestries would block the drafts and cold blowing through the castles, insulating them.

The Northern European city of Brussels was the epicenter of tapestry-making in the 15th and 16th centuries. The city even had a dedicated tapestry-weavers’ guild, which set strict guidelines for working hours and quality standards.

A great irony was that Italian tastemakers like Federico da Montefeltro, the Duke of Urbino, so beloved this Northern art form that he ignored its insulating properties, which actually made life more uncomfortable in the warmer South. In fact, da Montefeltro—nicknamed “the Light of Italy” for his cultural contributions during the Renaissance—even brought Flemish weavers down to his homeland and set up mini-workshops to produce tapestries in Italy.

Another intrinsic virtue of tapestries was that they could be rolled up and transported, allowing royalty to take their favorite allegorical art with them, as they often moved and dwelt in different castles. 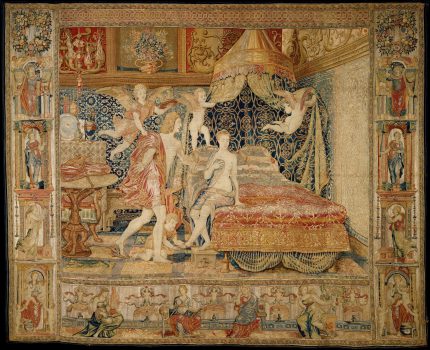 “Aglauros’s Vision of the Bridal Chamber of Herse, from the Story of Mercury and Herse,” designed circa 1540, woven circa 1570, after a print by Giovanni Battista Lodi da Cremona. Wool, silk and precious metal-wrapped threads. Bequest of George Blumenthal, 1941. (The Metropolitan Museum of Art)

Beyond these functional advantages, the sumptuous materials and virtuosity of craftsmanship made tapestries the paragon of luxury, displaying the wealth and power of the ruler and empire. The raw materials were expensive, such as wool, silk, and threads wrapped in silver and gold. These precious metal-wrapped threads would literally shimmer and dance in the candlelight, coming alive, and exuding an almost unimaginable beauty.

This confluence of artisanal virtuosity, otherworldly beauty, and sacredness inspires Cleland. She’s eternally grateful for The Met’s permanent tapestry collection, which she describes as the best “on this side of the Atlantic, definitely.”

While Cleland loves them all, she’s particularly fond of one “jewel-like” tapestry, only about 20 inches by 18 inches. During the 15th and 16th centuries, it was common for many devotional pieces to be smaller-sized. Her reaction to the piece may even be similar to how these precious works were viewed hundreds of years ago.

“It is the most arresting little object. It’s a half-length of Jesus as a baby wearing a shift, but he’s looking right out at you,” she says of the small devotional tapestry called “The Christ Child Pressing the Wine of the Eucharist.” 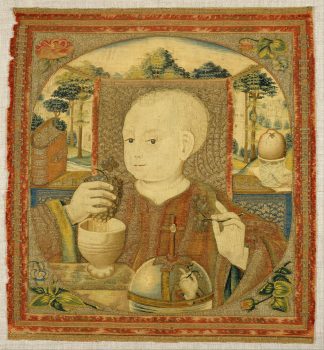 “He is locking eyes with you as he is squeezing a bunch of grapes above a chalice. The original owner would have understood this as an allegory showing how he would be shedding his blood to save mankind as the redeemer. His fate is predestined. Even though he’s a baby, he knows what’s going to happen.”

Masterpieces of European Tapestry: Medieval to Modern—Series in three talks: