Three Galleries at the Metropolitan Museum of Art

“Rendering humans is the most difficult. Next are landscapes, and after that are dogs and horses. Terraces and halls and other structures with set forms are easy by comparison,” wrote the Chinese painter Gu Kaizhi (344–406). In depicting humans, he emphasized using external forms to convey a person’s spirit, an idea that developed into a major guiding philosophy for figural representations in Chinese art. Instead of prioritizing the accurate portrayal of external forms and physical anatomy, artists thus focused on evoking a subject’s inner spirit, the individual’s distinctive “life energy.”

A variety of such Chinese figural representations is now on display at The Metropolitan Museum of Art. The exhibit includes three galleries. The first centers on children, a reflection of the long-standing importance of offspring in Chinese culture and continuing the ancestral line. The second showcases scenes of everyday life in ancient China as well as notable figures of history and legend. And the last gallery focuses on figures from Buddhism and Daoism, shedding light on the piety of the ancient Chinese. 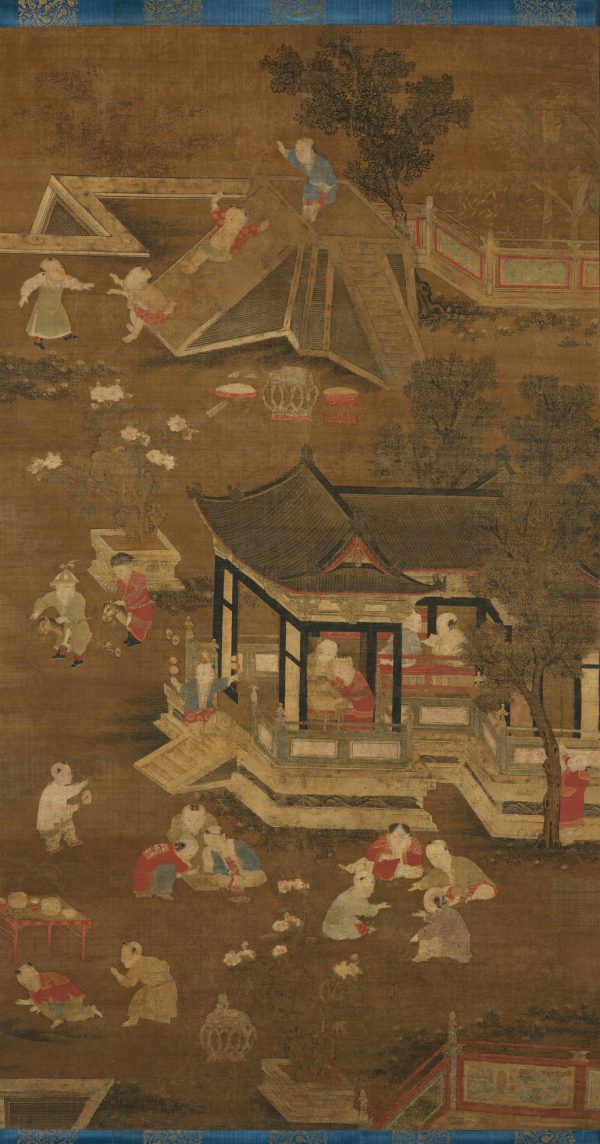 In ancient China, all families—whether they were families of nobles, scholar-officials, or commoners—hoped to have many children, a sign of good fortune. A thriving family with many children and grandchildren was commonly considered the requisite for happiness. The art often depicted children at play, frolicking about in seemingly infinite postures and positions.

One of the works on display is a silk tapestry that depicts the innocent, carefree life of children engaging in activities like archery, boating, falconry, fishing, horseback riding, kite-flying, playing musical instruments, or reading. In total, there are 83 boys in the painting. Colorful and intricately crafted, this Qing Dynasty tapestry was likely hung on the wall of a noble family’s home. 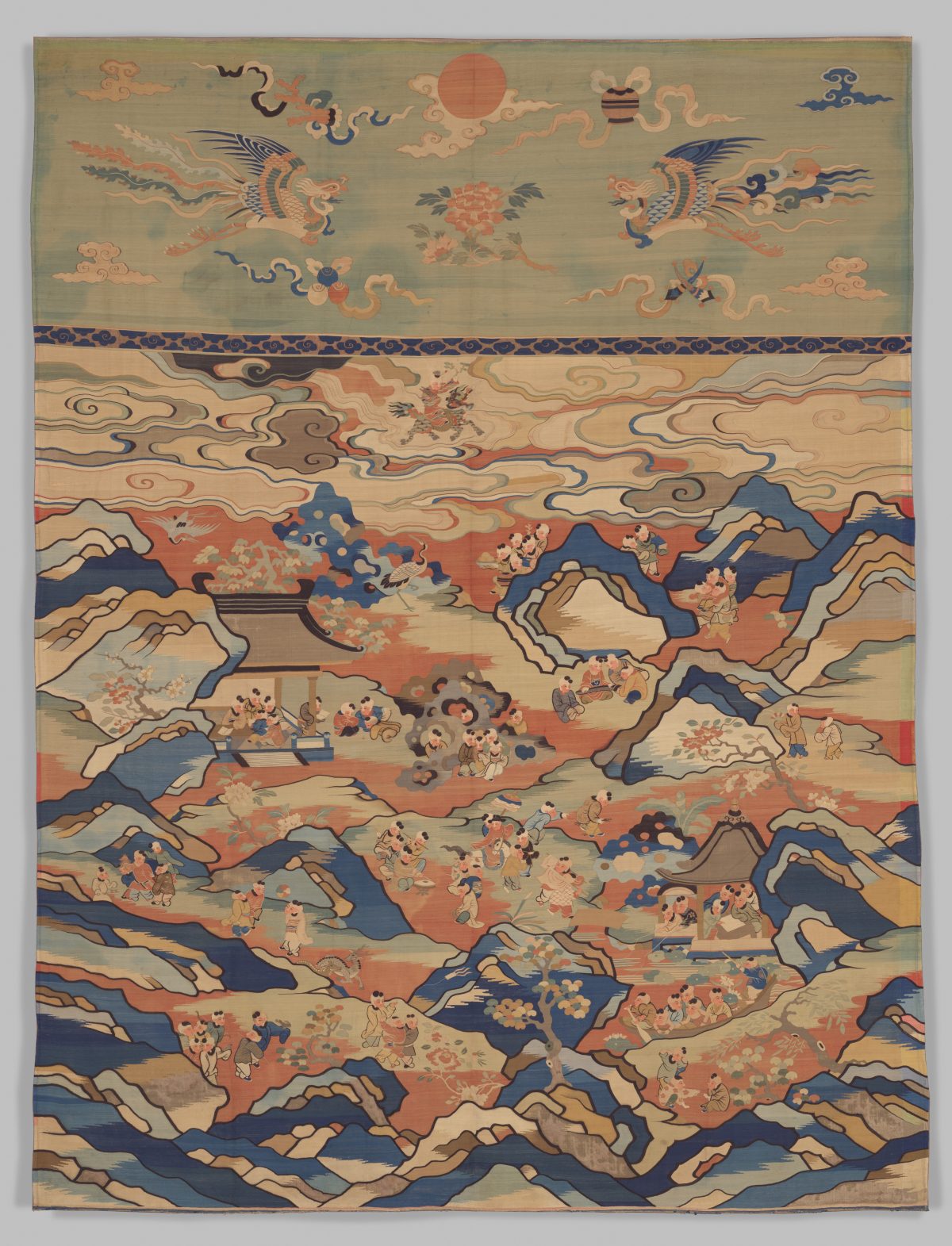 High in the sky is a pair of phoenixes, symbolizing great fortune and bright prospects. And among the auspicious clouds is a young boy riding on a qilin, a creature of Chinese lore that was said to have a horn, a yellow belly, a multicolored back, the hooves of a horse, the body of a deer, and the tail of an ox. The qilin was commonly associated with the imminent birth or passing of a sage or illustrious ruler, one who epitomized benevolence and righteousness. 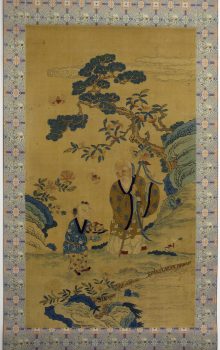 In traditional Chinese culture, children were symbols of purity and the original nature of humans, which is thought to be innocent and kind. As such, the classic Daoist text “Daodejing” celebrates infants, as Daoist cultivators sought to return to the purity of childhood before they were sullied by the chaos and turmoil of human existence.

The Lifestyle of the Ancients 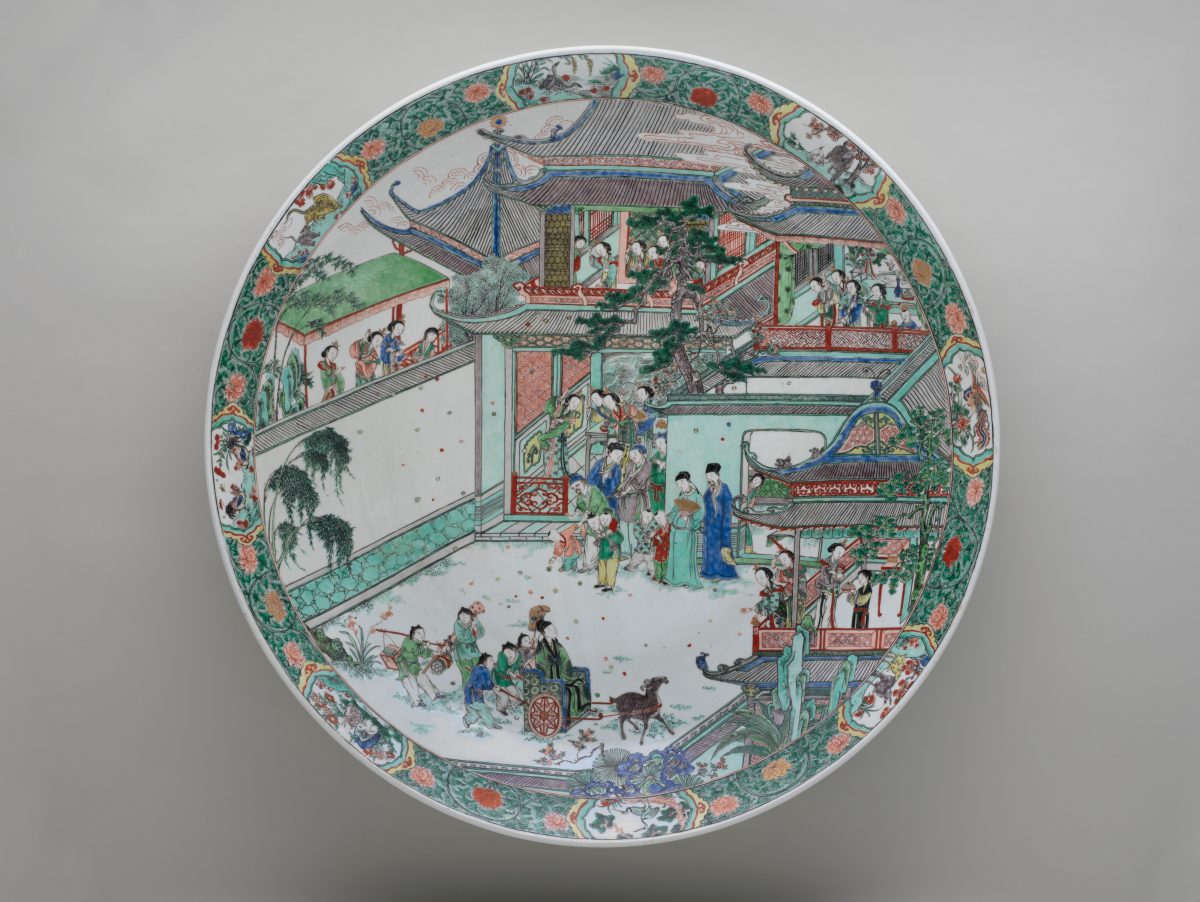 Women show their affection for a young scholar, probably the talented writer Pan An (247–300), by throwing fruit at him. Such scenes were often found in decorative arts. Platter, Kangxi period (1662–1722) of the Qing Dynasty, dated early 18th century. Bequest of John D. Rockefeller Jr., 1960. (The Metropolitan Museum of Art)

The everyday life of ancient people in Chinese art was quite elegant and refined. People can be seen admiring the flowers in spring and the moon in autumn, tasting tea, strolling through gardens, and relishing “the four arts”—painting, calligraphy, playing the seven-stringed zither, and enjoying the strategy board game of Go. Such scenes reflected the ethos of ancient people who sought long-term fulfillment instead of short-term rewards. Instead of bustling around restlessly, they appreciated slowness and tranquility. 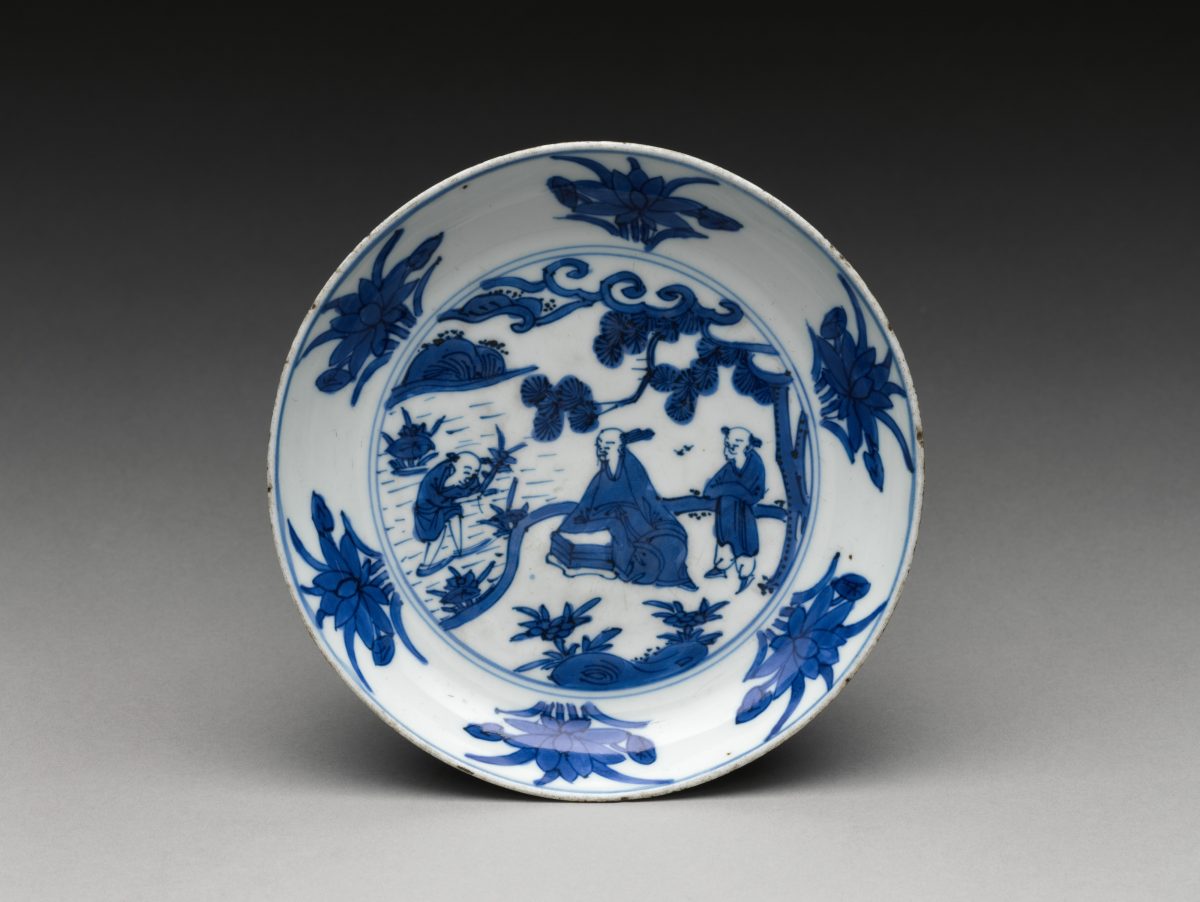 One of the works on display is a porcelain dish that depicts a scholar sitting peacefully beneath a tree, watching as one of his attendant boys picks lotus flowers from the nearby pond. The scene reminds us of the Song Dynasty scholar-official Zhou Dunyi (1017–73), who penned the famous essay “On the Love of the Lotus.” In it, he writes, “I only love the lotus flower, which emerges out of mud, yet is not contaminated … The lotus flower is the gentleman among flowers.” The term gentleman, or “junzi,” described an ideal, virtuous individual in Confucian philosophy. And thus the lotus flower symbolizes purity and virtue and reminds people to avoid being polluted by the troubles of their external circumstances.

Traditional Chinese art was filled with depictions of divine beings and immortals from Buddhist and Daoist beliefs, a reflection of the ubiquitous spirituality of ancient peoples. 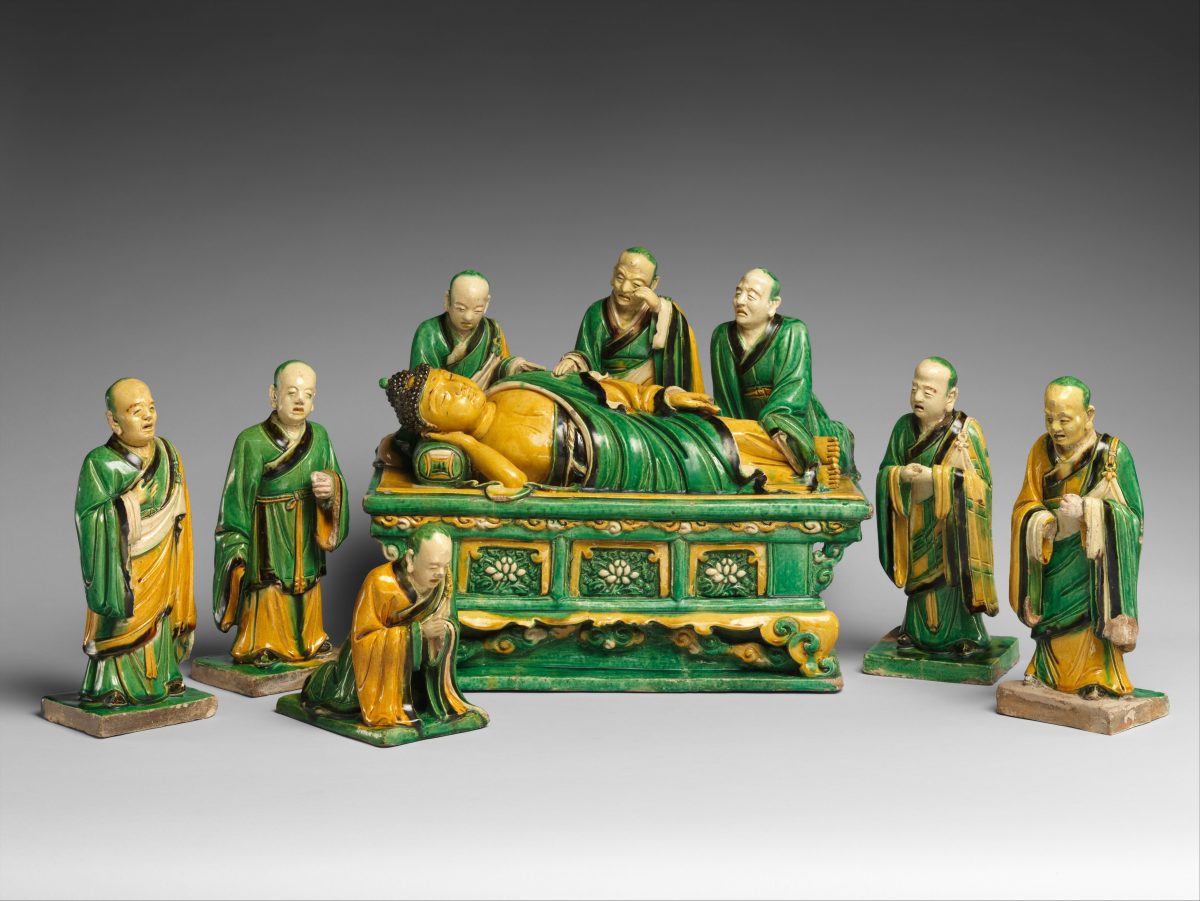 In this scene, the Buddha has passed away and reached nirvana. His disciples are all in deep sorrow. By Qiao Bin, Hongzhi period (1488–1505) of the Ming Dynasty, dated 1503. Fletcher Fund, 1925. (The Metropolitan Museum of Art)

One of the most stunning works in The Met’s exhibit is a set of ceramics showing the Buddha reaching nirvana surrounded by eight of his disciples in immense sorrow. The Buddha’s face is round and full, and his expression serene. Very few such polychrome earthenware figurines have survived from the Ming Dynasty (1368–1644), and it is almost impossible to find a full set of figurines like this one. 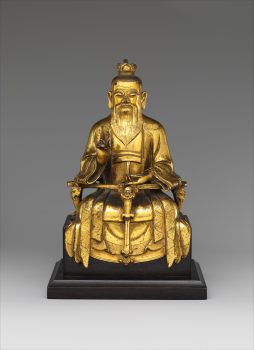 Another notable work on display is an early Ming brass sculpture of the ancient Chinese Daoist philosopher Laozi, who quietly meditates with a peaceful and solemn expression on his face.

Besides Laozi, the Eight Immortals are also popular Daoist figures frequently depicted in art. An intricately crafted tray shows the Eight Immortals awaiting the arrival of the god of longevity, who flies over on the back of a crane. The Eight Immortals can each be identified by personal attributes like a flute, staff, sword, flower, and gourd. In the background, the pine tree, the crane, the peach tree, as well as the clouds and mist are all symbols of longevity in popular beliefs. 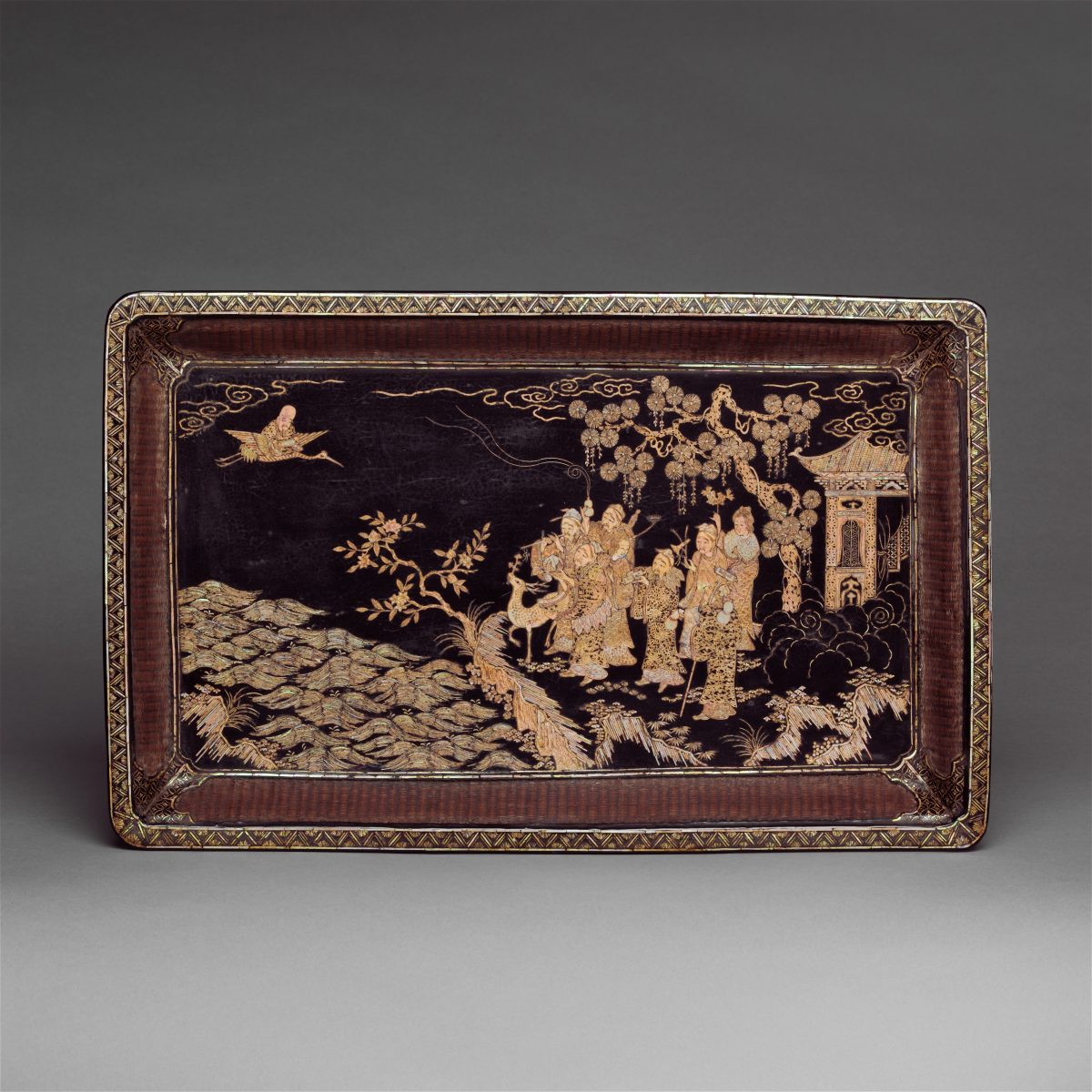 This scene depicts the Eight Immortals, a group of Daoist deities, standing on the riverbank awaiting the arrival of the god of longevity (Shoulao), who flies over on a crane. Tray with Daoist figures, Ming Dynasty (1368–1644), dated 16th century. Purchase, Barbara and William Karatz Gift, 2006. (The Metropolitan Museum of Art)

Such religious works of figural representation reflected the traditional customs and beliefs of the people at the time, who valued purity, faith, and virtue. In different artistic mediums, from paintings to jade artifacts, ancient peoples imbued their spirit of piety, self-cultivation, and pursuit of higher wisdom.