Grasping at Straw in Hieronymus Bosch’s ‘The Haywain’

Reaching within: What traditional art offers the heart

Have you ever worked really hard for something or wanted something badly only to care little for it after you have gotten it? Or have you wanted something really badly only to regret having it after you’ve gotten it? I have experienced both of these. Sometimes things seem great when seen from a distance; the grass always seems greener. But I’ve forgotten that grass is just grass. I believe Hieronymus Bosch is saying something similar with his painting “The Haywain.”

Bosch was a member of the religious confraternity “Illustrious Brotherhood of Our Blessed Lady,” which was dedicated to venerating the Mother of God, the Virgin Mary. Many of his paintings were made for the confraternity and display religious subject matter, but they often use strange and even disturbing imagery. 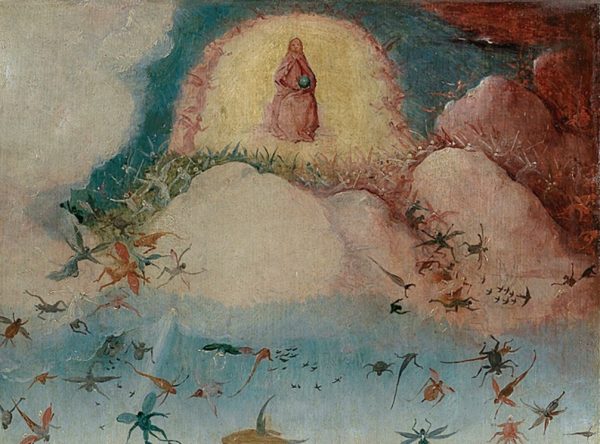 In a detail from “The Haywain,” evil is cast out of heaven. (Public Domain)

So, what do I see happening here? From left to right, the first panel depicts a scene from the heavens and the Garden of Eden. God appears in the top center, sitting calmly in an oval of light and appears to hold an orb in his hand. There seems to be a war in heaven, and the angels are casting out rebel angels who are transforming into monsters as they fall to earth. Below, the rest of the panel depicts the biblical scene of Adam and Eve: the taking of the forbidden fruit and being cast out of the Garden of Eden. 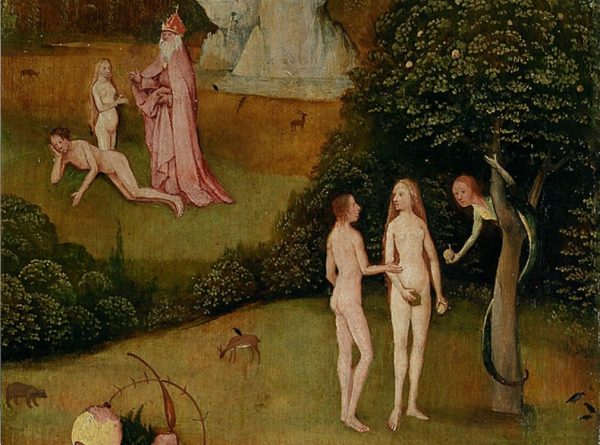 A detail from “The Haywain” in which Adam and Eve are tempted by the serpent. (Public Domain)

I’ve always found the story of the forbidden fruit of the knowledge of good and evil to be interesting. Adam and Eve experience heaven on earth until they learn of conflict. Why do I say this? It is only after Adam and Eve learn of evil—naturally in conflict with good—that they are cast out. The forbidden fruit gives them knowledge of good “and” evil. Up until this point, they are harmonized with the only one of the two that is available: the good. Learning about what naturally conflicts with the good is what gets them expelled from the Garden of Eden. It’s what exempts them from eternal life. 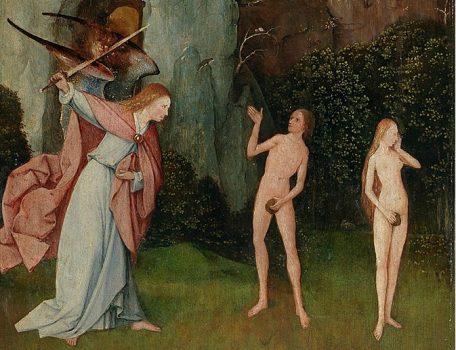 Here, Adam and Eve are cast out of the Garden of Eden after learning of good and evil. (Public Domain)

The center panel depicts the story of humankind—a humankind that has already learned about and inevitably engaged in conflict. Jesus watches from the clouds above. 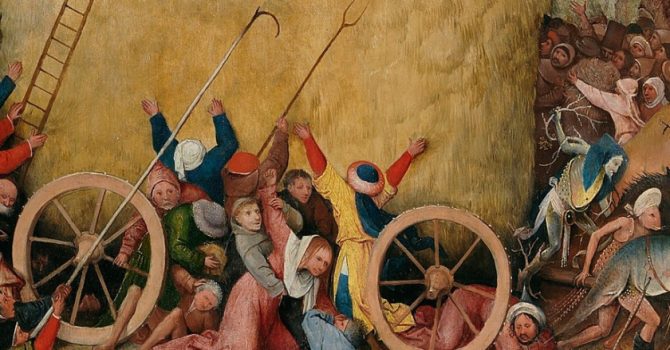 People contend for the hay. Some (on the far right) are led by devils to hell. (Public Domain)

People of all types are gathered around a very large haystack carried on a wagon, or wain. Rich people, poor people, religious people, violent people, doctors, musicians, and so on, are depicted dancing, celebrating, and worshiping this haystack. They campaign toward it and attempt to climb on top of it as if to claim it for themselves. They hurt one another to get close to it. They reach for the hay to grab pieces for themselves. The haywain rolls on top of some who have gotten too close. All of these people are affected by the hay; they exist in potential conflict with each other because of the hay. 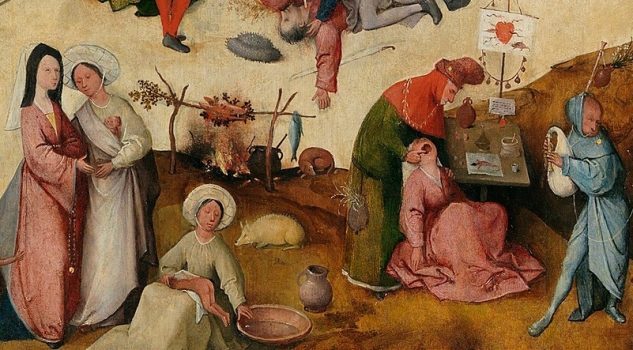 Some people (in the central panel) are involved in everyday activities, indifferent to the hay. (Public Domain)

There are a few clusters of people in the foreground who are exempt from the conflict, as they lead ordinary lives and care little for obtaining the hay. One person sees a dentist, another cleans a child, some work for their daily bread, and others walk with their children.

The hay appears to be symbolic of worldly pleasures and worldly gain, and, as such, this is a painting that is still relevant today. We all pursue material things to supplement our self-worth. In doing so, we are possibly hurting our fellow human beings. We forget that the object of our pursuits is only hay.

And look at how large the haystack is! There is plenty for everyone. Is it possible for us to enjoy the hay without hurting one another? 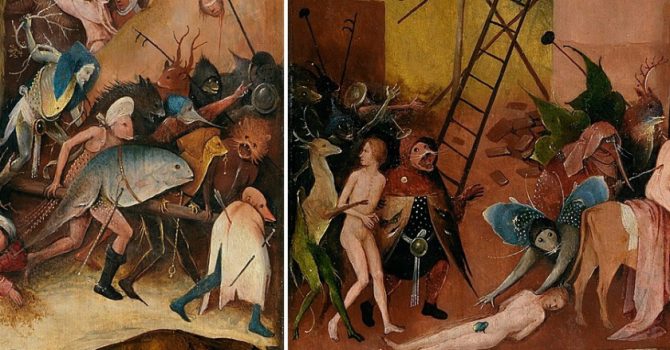 The far right portion of the central panel and the left panel show the devils first leading and then torturing their prey. (Public Domain)

On the far right side of the center panel, a group of demons lead those whose pursuits are strong to the right panel—a depiction of hell. These demons take on the images of animals and monsters: hooded monsters, a monster riding a fish, and a snarling bear, among others. 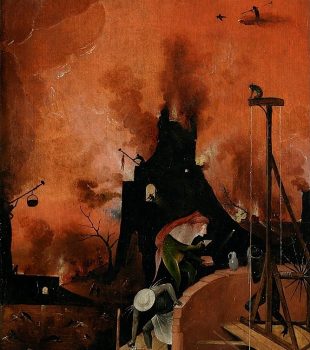 The top of the right panel shows the gloom and horrors of hell. (Public Domain)

The background in the right panel is red and black, full of smoke and fire. A demon can be seen hanging a figure in the top center of the background. In the background on the left side of the panel, dark figures appear to be drowning light figures in what appears to be water or a dark liquid. In the foreground, demons are building a tower as if they are expanding hell. Maybe the tower is symbolic of the tower of Babel, which was a collective pursuit of human beings to reach heaven through material means. In front of this tower, human figures are being tortured in different ways.

We can look at the panel of hell in several different ways. One way seems to claim that we have created our own hell here on earth. We are creating an environment that is destructive through our pursuits. What at first seems pleasurable, later ends up causing us pain.

Others might say that we are not creating a destructive environment here on earth. Instead, we have been led astray toward an afterworld far worse. Through our intense material pursuits, we are being led to a world in which we will be tortured and made to pay for the pain we have caused our fellow human beings.

Some could argue it’s possibly both: We are hurting ourselves here on earth with our extreme pursuits and will have to pay for it in an afterlife.

Either way (or both), Bosch doesn’t tell us what to do. He doesn’t give a prescription for his diagnosis. He critiques conflict and only suggests what may be the underlying issue, depicting the symptoms: When we are consumed by desire for material things, we ultimately hurt ourselves and others.

But maybe this suggestion is all we need. It can and does serve as a warning to keep our desires in check and consider others before we grasp at straw.

Art has an incredible ability to point to what can’t be seen so that we may ask: What does this mean for me and for everyone who sees it? How has it influenced the past, and how might it influence the future? What does it suggest about the human experience? These are some of the questions I will explore in my series Reaching Within: What Traditional Art Offers the Heart.

Eric Bess is a practicing representational artist. He is currently a Ph.D. student at the Institute for Doctoral Studies in the Visual Arts (IDSVA).