“They are eloquent who can speak low things acutely, and of great things with dignity, and of moderate things with temper,” Cicero wrote in “The Orator.”

The traditional sonnet can allow this level of communication to occur. The rhyme and rhythm of a sonnet may even evoke the poem’s meaning before the words are actually understood. This is due to the structural integrity of the sonnet.

If the structure is lost, so too is the harmony—of the rhyme and the reason. Like musical notation without its bars, it falls from grace into discord.

The two main types of sonnet are the Petrarchan sonnet and the English sonnet, also known as the Shakespearean sonnet, as this is the type of sonnet Shakespeare wrote. They differ in their rhyming schemes, but both encourage eloquent discourse.

How the Sonnet Came to Be

The first sonnets were thought to be written between 1220 and 1250, at the court of Emperor Frederick II of Sicily, in southern Italy. It was the emperor’s notary and legal assistant, Giacomo da Lentino, who wrote the majority of these sonnets.

Sonnets were used as poetic dialogue in the court to convey arguments and counterarguments, explore ideas and concepts, and normally end with a solution. The sonnet gave the court poets a vehicle to demonstrate their wit, wisdom, and intellect. 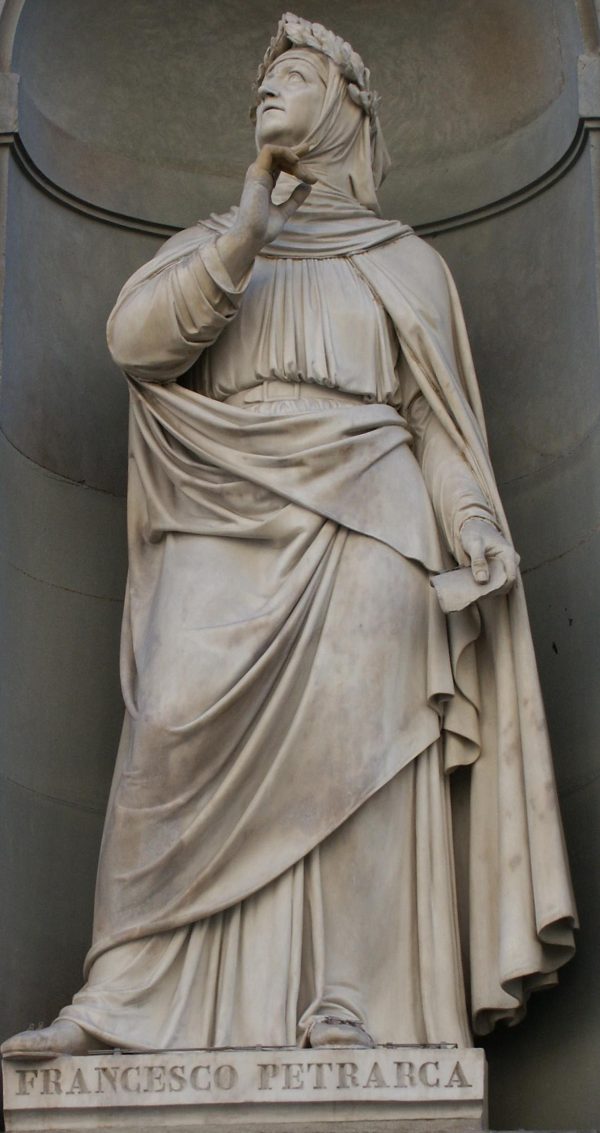 Statue of Francesco Petrarca at the Uffizi Gallery in Florence, Italy. (Frieda/CC BY SA 3.0)

In the 1330s, Francesco Petrarca, more commonly known as Petrarch, popularized the form. The Petrarchan sonnet is the Italian sonnet as we know it today. Petrarch’s “Canzoniere,” or “Song Book,” written over 40 years, contains 317 sonnets along with other kinds of poems, for example, ballads and madrigals. Petrarch’s “Canzoniere” inspired the love poetry of Renaissance Europe.

The Petrarchan sonnet uses a “volta” (turn) to divide the 14 lines of the sonnet into two distinctive parts. The first eight lines (the octave) are an outpouring of a problem: the thoughts and feelings that need addressing. It’s at this point in the sonnet that the volta comes, where the poet redirects or restates the idea, thoughts, or feelings. The last six lines (the sestet) address the issue, emphasize a point, and normally provide a solution.

The rhyming scheme of a Petrarchan sonnet is ABBA ABBA for the octave and CDE CDE or CDC DCD for the sestet.

How the Sonnet Came to England

In 1520, the sonnet came to England, to the court of King Henry VIII, where Sir Thomas Wyatt and Sir Henry Howard, the Earl of Surrey, wrote the first sonnets in English.

Wyatt became acquainted with French and Italian poets when he traveled to Italy and to the papacy on diplomatic missions. When he returned to England, Wyatt translated Petrarch’s sonnets.

Wyatt adapted the Petrarchan sonnet to make the last two lines rhyme (the couplet), and Howard changed the octave to introduce more variation in the rhymes. The rhyming scheme of the English sonnet is ABAB CDCD EFEF GG.

In general, the rhythm of sonnets in the English language follow an “iambic pentameter,” meaning each line must have five (penta) “iambs.” One iamb is one unstressed syllable and one stressed syllable.

Shakespeare’s couplet in “Sonnet 18” sums up the enduring romance of this poetic form:

So long as men can breathe, or eyes can see, So long lives this, and this gives life to thee.