Michaelangelo and His Garland Maker

The pleasant-sounding name Domenco di Tommaso Curradi di Boffo Bigordi, is that of the creator of outstandingly beautiful, early Renaissance frescos. The name is Italian; and his nickname, Domenico Ghirlandaio, means "Domenico the garland maker."

Known for painting finely detailed faces and appropriately placing figures in scenery, his portraits continue to delight people. Certain figures in some of this painting look directly at the viewer, making the viewer feel that they are part of the events on the canvas. To make the viewer part of the artwork itself may seem simple, but is effected through the true representation of human figures and their realistic gestures.

Another element is the frequent use of infinite perspective that leads the viewer into the distance, swept along with the images of rivers, mountains, lakes, and silhouettes of distant cities. Such vistas create tension for the viewer, as they need to decide what to look at first.  Should they behold the idyllic, detailed, facial features that could tell a story, or enjoy the endless heavenly breadths of the background scenery?

The Artist’s Sponsor is Emphasized in the Paintings

Domenico's masterworks also portray long-ago events coupled with the Florentine of his time. He combines Renaissance clothing, societal mores, and architectural traditions with biblical themes and events from antiquity. Of note is the placement of influential persons [such as art sponsors] next to biblical personas, and at equal positions, in the paintings. Such placements are contrary to previous eras where sponsors were shown smaller and in a prayerful, kneeling position, at the paintings' edges. 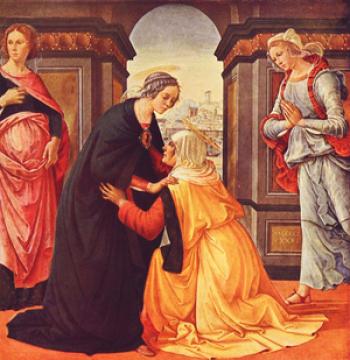 This represents a turn from the sacred toward the secular. It is particularly evident in the "Visitation" painting at the Santa Maria Novella choir chapel. The group of women on the right hand side ought to belong with Elizabeth's entourage according to their proportions and position. The woman leading the group is Giovanna degli Albizzi, Lorenzo Tornabuoni's wife. The older woman on the far right, is Dianora Tornabuoni, wife of the highly decorated Tomaso Soderini and sister of the artist’s sponsor.

Thus, Domenico included the sponsor's family, and created a miniature of Florence society's leaders of the time. This theme of representing people related to the Tornabuonis is repeated when viewing the complete works in the chapel. This is quite a contrast to his like-named work on wood, which shows only Mary Jacobaea and Mary Salome. That scene emits a delicate glow. There is no aberration in the meeting of the women, which focuses solely on them. What might have been the reason for such contrasting portrayals? Did the sponsors order it thus, a concession by the painter?

What was Domenico thinking while he painted? Were his thoughts focused on and sympathetic to the sponsors? Was there an underlying expectation of a larger honorarium? Or was his thinking akin to the sponsor's placement in the work, a state where power and recognition were of prime importance, tempting him to paint them as equals to the biblical figures?

One could certainly question if these influential people wanted to impress the strongly religious general public that as sponsors, they are under the protection of holy persons, and were thus portrayed as demonstrating their powers and supremacy. That applies equally to the Medici clan as well as to the Tornabuonis. With the Medici in particular, their quest for power, wealth, prestige, and recognition had a major influence on that era. The Medici's rise from an obscure, well to-do family, to an Italian powerhouse, was based on clever tactics and ruthless political games.

Ghirlandaio was a prolific artist who had many students of which Michaelangelo was the best known. At age 13 he was a paid apprentice in Domenico Ghirlandaio's workshop. Michaelangelo had to navigate these power struggles, as did many other artists.

These artists were often confronted with a decision: should they opt for a secure financial existence, the possibility of furthering their artistic abilities, and live the rest of their lives in opulence or, forego the power plays and competing battles among the artists and distance themselves from the influential patrons? It is obvious that art during that era was intertwined with belief, politics, and competition.

A Chip Off the Old Block

Domenico's most striking work is probably the portrait of a grandfather and his grandchild, showing the grandfather's age-ravaged face distorted by facial growths, which is contrasted by the grandchild's beauty, an unexpected starkness. That 1480 painting hangs in the Louvre in Paris.

Michaelangelo became hugely successful on his own in Rome 20 years later, having learned the art of the fresco from his master. The saying "a chip off the old block" definitely fits.