Paving the Way to Heaven: Asking Yourself Why

A detail from “Conversion on the Way to Damascus,” 1601, by Caravaggio. Oil on canvas. Saint Mary of the People, Rome. (Public Domain)

In 1600, Caravaggio, an Italian Baroque painter of biblical scenes, was commissioned by Tiberio Cerasi to paint a scene of Paul’s conversion on the way to Damascus.

Saul of Tarsus, who would later be called Paul upon his conversion to Christianity, was a Jew from Asia Minor and a member of a religious sect called the Pharisees. As a Pharisee, Saul believed in life after death and in the significance of Jewish traditions, and he carefully studied the Hebrew Bible.

For the first half of his life, Saul persecuted adherents of the then-new religious movement Christianity. Scholars say there’s no evidence that his attempt to persecute Christians stemmed from being a Pharisee, but Saul may have believed that converts to Christianity were not respectful of Jewish traditions and mingled too freely with the non-Jewish.

Saul’s persecution of Christians consisted in arrests, humiliation, and ostracization. He would travel to synagogues to punish Jews who accepted Jesus as the Messiah. Saul even witnessed a mob stone a man named Stephen who was one of seven Christian deacons in charge of helping other persecuted Christians. Saul approved of the mob’s actions.

On his way to Damascus to continue persecuting Christians, Saul had a vision in which he saw Jesus. “The New International Version” (NIV) of the Bible tells the story from Acts 9:1–5 as follows:

“Meanwhile, Saul was still breathing out murderous threats against the Lord’s disciples. He went to the high priest and asked him for letters to the synagogues in Damascus, so that if he found any there who belonged to the Way, whether men or women, he might take them as prisoners to Jerusalem. As he neared Damascus on his journey, suddenly a light from heaven flashed around him. He fell to the ground and heard a voice say to him, ‘Saul, Saul, why do you persecute me?’ ‘Who are you, Lord?’ Saul asked. ‘I am Jesus, whom you are persecuting. …’”

Those gathered near him could not see who Saul was talking to. After the vision, Saul went blind and did not eat or drink for three days. Jesus appeared to a man named Ananias and told him to meet with Saul, who was now Jesus’s “chosen instrument.” Ananias met with Saul, and Saul’s blindness was cured when Ananias touched him. Saul was baptized, converted to Christianity, and changed his name to Paul. 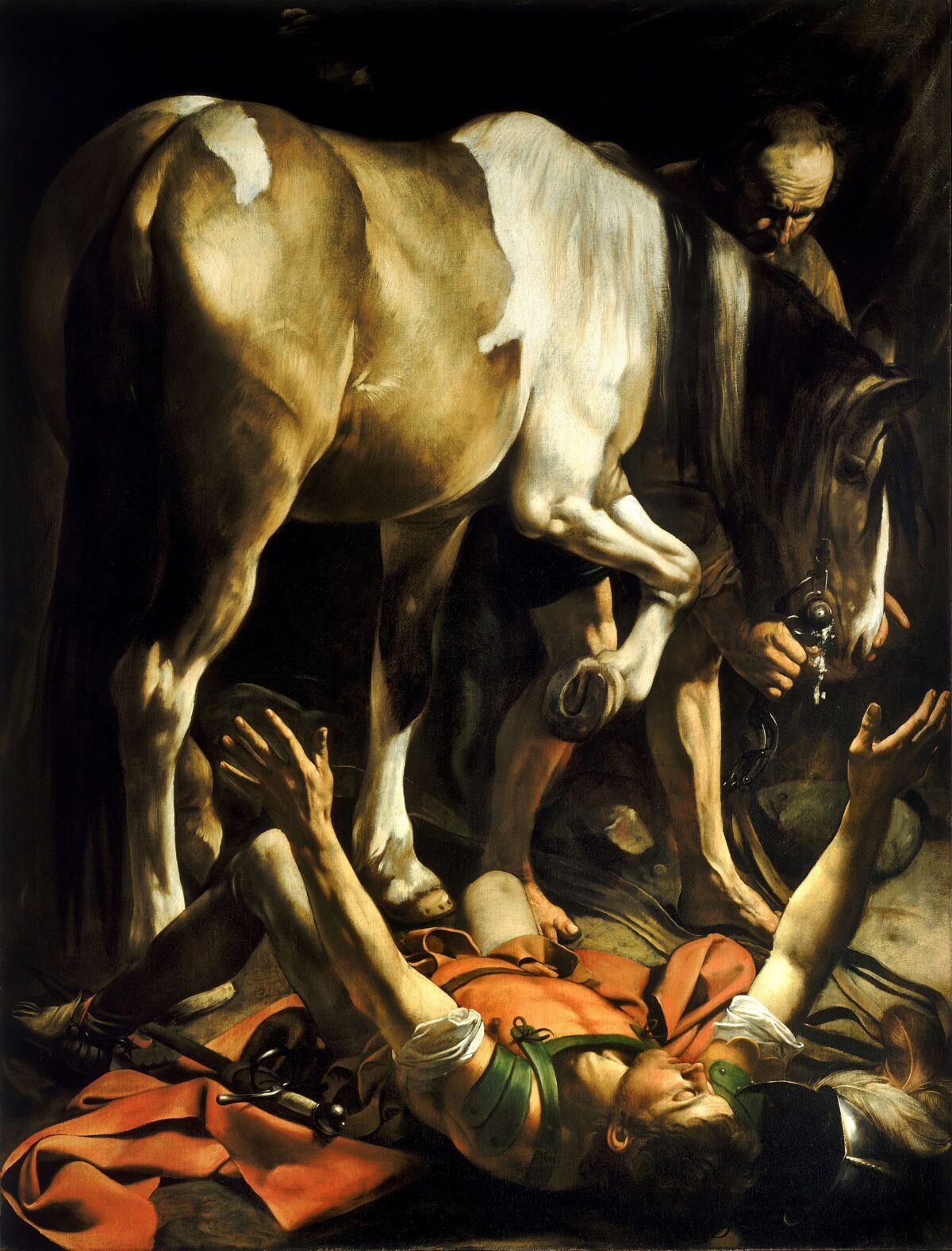 “Conversion on the Way to Damascus,” 1601, by Caravaggio. Oil on canvas. Saint Mary of the People, Rome. (Public Domain)

Caravaggio depicted the moment at which Paul falls from his horse and receives the divine vision. The artist used tenebrism to organize the effects of light in the composition. Tenebrism is the use of extreme, gloomy darks and extreme lights to convey drama and emotion in art.

The three figures in the composition appear to be illuminated by a spotlight in an environment of darkness. The light helps organize the hierarchical elements of the composition. The horse’s groom at the back right of the painting is the least important element, receiving the least amount of light. In comparison, the horse receives more light, has higher contrast, and appears closer to us. Paul receives the most light at the foreground of the picture plane.

The groom leads the horse by its bit to the right of the picture plane. The groom also points to the ground. Paul is on the ground with his arms outstretched and eyes closed as he experiences visions of the Messiah. His arms are outstretched as if he wants to hold on to the divine vision and never let go.

Both the horse and groom, however, seem unmoved by Paul’s fall. They seem to go about business as usual. The horse even seems to step over Paul as the groom leads it. Paul is having the experience of his lifetime, and no one or no thing in the painting seems to care much.

Why does Caravaggio depict the horse and groom as unmoved as Paul has his vision? Is it to suggest that Paul’s vision is a personalized and solitary vision? As Jesus’s “chosen instrument,” is Paul no longer a part of his former world?

The horse and groom may pass by Paul during his fall, but it’s difficult for us to pass him by. The composition is framed so tightly that the three figures fill up the picture plane to its limit. Caravaggio foreshortened Paul’s body and forced it to nearly share our space.

Art historians Steven Zucker and Beth Harris suggest that this degree of foreshortening and tenebristic realism was Caravaggio’s attempt to bring the divine into the world:

“[T]here’s so much foreshortening here, not only is the body of Saul foreshortened, his sword is foreshortened, the horse is foreshortened. And, so, everything is so close to us. In the Renaissance, we often saw a distance between the world of human beings and realm of the divine. But, here Saul is present in our world.”

Caravaggio uses foreshortening to accomplish a trompe l’oeil effect that makes Paul appear as if he is sharing our space. Trompe l’oeil is a French art phrase meaning “deceive the eye.” It was often incorporated in still-life paintings to make objects appear so real that they seemed to actually exist.

Did Caravaggio want us to feel closer to the divine by making the image appear so real? Why did he use tenebrism and foreshortening to create a trompe l’oeil effect that would make the divine appear as if it shared our space?

The Divine Here and Now

Not everyone today is religious, but it doesn’t mean that religious teachings don’t provide moral lessons from which we can all learn. Caravaggio’s presentation of Paul’s conversion has a lot to offer us in terms of improving our characters.

Caravaggio’s painting reminds me that we all live our lives doing things that we aren’t proud of. We may find ourselves intentionally and unintentionally hurting people. At first, we may find reasons to rationalize and justify our actions. But hopefully, we eventually recognize the pain we cause before we hurt someone or something in a way we deeply regret.

Starting with a “why” and questioning our own behavior may be enough to shock us into seeing how our actions may negatively affect others: “Why am I acting like this?” Maybe this shock has the potential of making us fall away from bad habits that cause harm. Though the world may go on as usual, we each have the potential to separate ourselves from thoughts and actions that hurt others.

Seeing how our actions may negatively affect others can cause us to reflect on our own behavior. Then, hopefully, we can make the necessary changes to allow the divine to share our space.