–Paris de Grassis, master of ceremonies for the 16th-century Pope Leo X, wrote in his diary after seeing Raphael’s “Acts of the Apostles” tapestries.

More than 500 years later, all 12 of Raphael’s “Acts of the Apostles” tapestries were recently hung as Pope Leo X had originally intended, on the lower wall of the Sistine Chapel. The last time the complete series of tapestries were hung together in the chapel was in the late 1500s, exhibition and Vatican Museums curator Alessandra Rodolfo told Reuters. 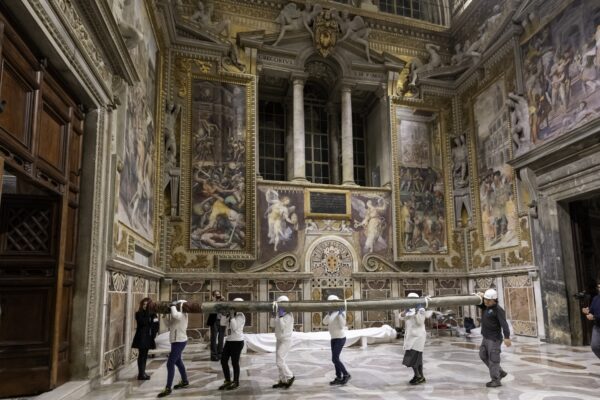 One of Raphael’s “Acts of the Apostles” tapestries is taken into the Sistine Chapel where all 12 tapestries were hung together for the first time in 500 years. (Governatorato SCV–Direzione dei Musei)

The rare event celebrated the 500th anniversary of Raphael’s death in 1520. It also paid homage to the ancient custom of adorning the papal chapel with fine textiles and tapestries for noble ceremonies and important Christian liturgical traditions, Rodolfo said in a press release.

The Sistine Chapel “is of universal importance, not only for visual arts but for our faith,” Barbara Jatta, the director of the Vatican Museums told Reuters. “So we really want to share this beauty with people, even if only for one week.” 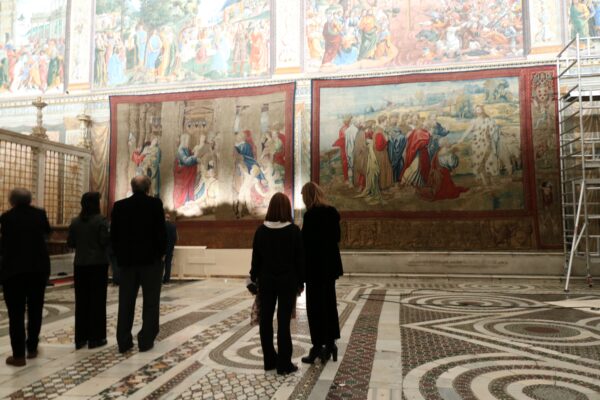 Visitors gain a sneak peek at Raphael’s “Acts of the Apostles” tapestries as they are hung in the Sistine Chapel prior to being open to the public. (Governatorato SCV – Direzione dei Musei)

The beauty of the tapestries can be appreciated even more since their recent renewal.: The Vatican Museums conservators have, over a number of years, restored the tapestries.

In 1515, Pope Leo X commissioned Raphael to design the tapestries to depict the lives of Saint Peter and Saint Paul—the fathers of the Christian church. The art added to the chapel’s existing pictorial message of how the Gospel came from Jerusalem to Rome. 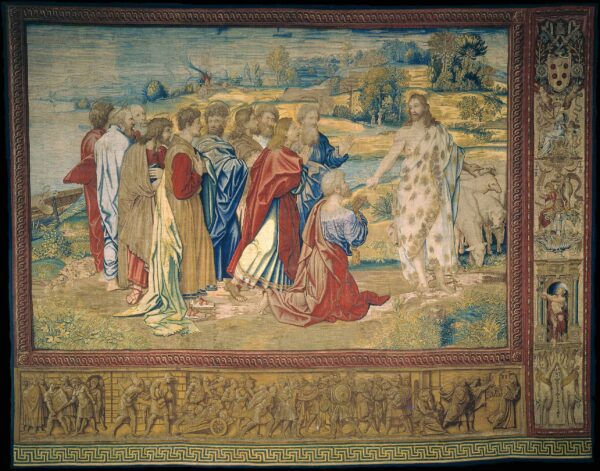 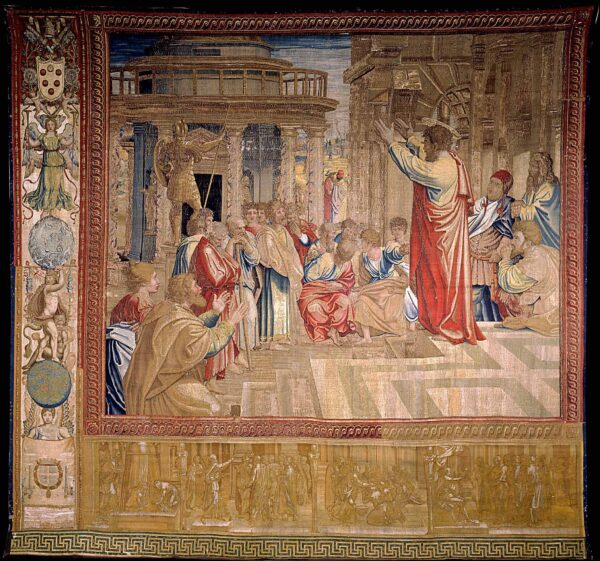 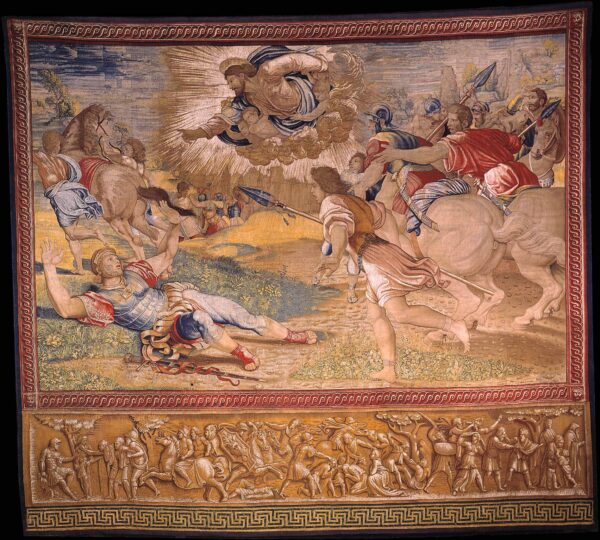 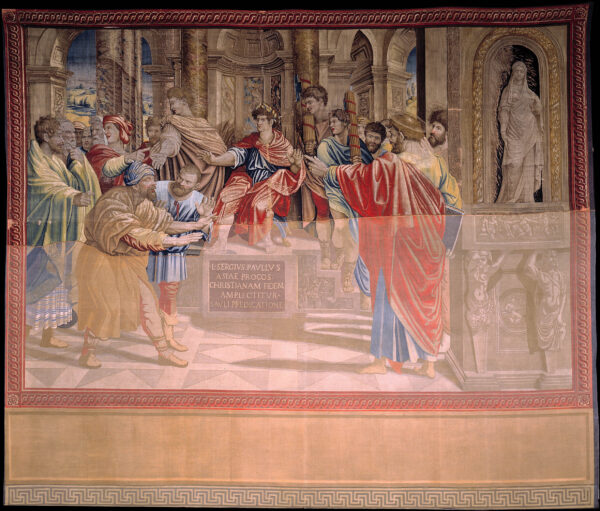 The tapestry cloths were made to be hung on feast days, on the lowest part of the Sistine Chapel walls, which are painted as faux curtains. When hung, the tapestries are just below the frescoes depicting the stories of Moses and the life of Christ that were painted by renowned 15th-century artists.

Pope Leo X paid five times the cost of Michelangelo’s Sistine Chapel frescoes, which was 3,000 ducats. Raphael received only 1,000 ducats, and the rest was absorbed by the manufacturing of the tapestries.

Raphael and his workshop created the tapestry cartoons between 1515 and 1519.

Raphael depicted the stories of St. Peter and St. Paul from the Bible’s Gospels and the Acts of the Apostles for 10 of the tapestries, and he designed the Hours and Seasons on two narrow tapestries. 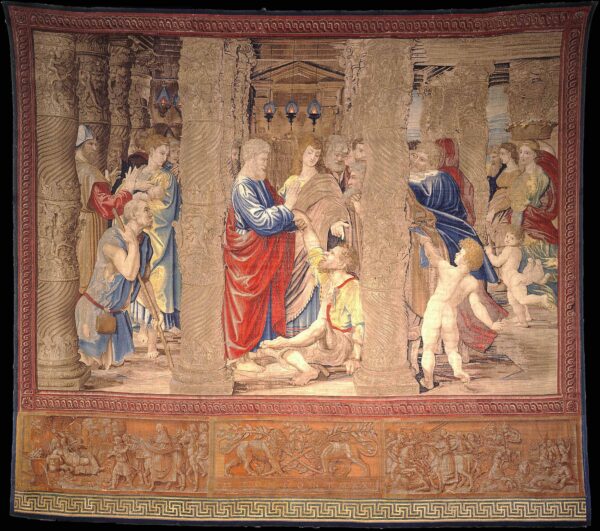 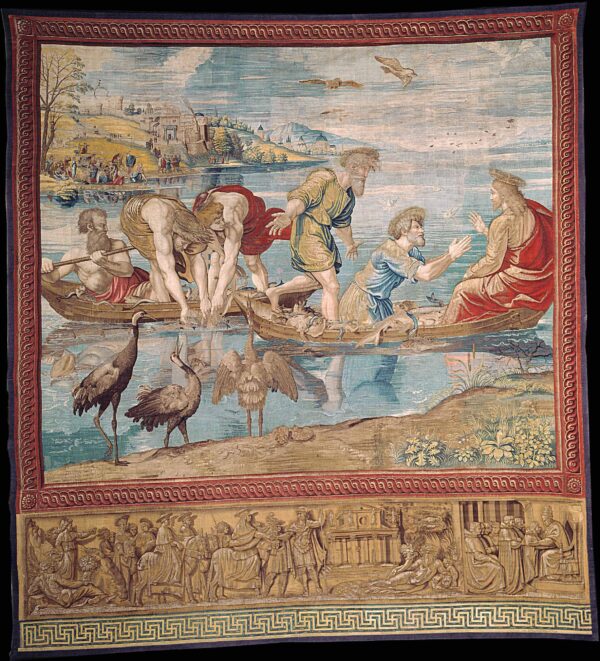 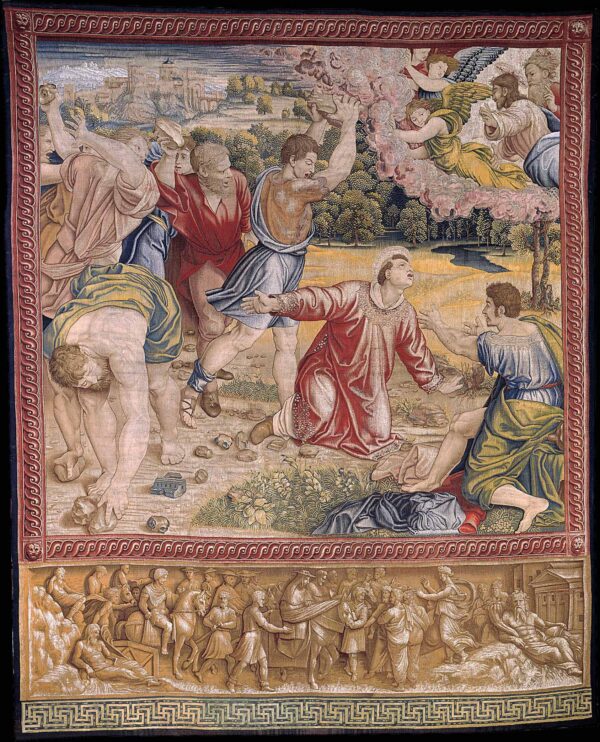 Raphael’s designs were sent to Brussels and woven at the workshop of world- renowned tapestry weaver Pieter van Aelst. The fully colored cartoons were cut into strips about a yard wide to make transferring the designs easier. Then the cloths were finely woven with silk, wool, and precious silver and gold thread.

Seven of the tapestries arrived in Rome in 1519 and were hung in the Sistine Chapel to celebrate Holy Mass on Dec. 26, 1519, St. Stephen’s Day. By 1521, all 12 tapestries had arrived at the Vatican. Raphael may have seen only these first seven tapestries hung in the chapel, as he died suddenly in 1520, at the age of 37.

Raphael: A Man of Great Art and Character

“When this noble craftsman died, the art of painting might well have died also, seeing that when he closed his eyes, she was left as it were blind,” wrote historian and artist Giorgio Vasari in “The Lives of Artists.”

“For in truth we have from him art, coloring, and invention harmonized and brought to such a pitch of perfection as could scarcely be hoped for; nor may any intellect ever think to surpass him,” he added further in the passage.

For Vasari, Raphael’s greatness wasn’t confined to his art: He was genuinely a good and great man. Vasari believed that Raphael had “grace, industry, beauty, modesty, and excellence of character as would have sufficed to efface any vice” and that he “was so full of gentleness and so overflowing with loving kindness, that it was seen that the very animals, not to speak of men, honored him.”

The whole of Rome, it seems, turned out for Raphael’s funeral procession to the Vatican for his funeral Mass. “The true grandeur of the procession was that immense concourse of friends, of pupils, of artists, of renowned writers, of personages of every rank, who accompanied him, amidst the tears of the whole city; for the grief was general and the Pope’s Court shared in it,” wrote the French biographer Quatremère de Quincy in his 1824 “History of Raphael.”

And Vasari wrote: “Wherefore it may be surely said that those who are the possessors of such rare and numerous gifts as were seen in Raffaello da Urbino are not merely men, but, if it be not a sin to say it, mortal gods; and those who, by means of their works, leave an honorable name written in the archives of fame in this earthly world of ours, can also hope to have to enjoy in heaven a worthy reward for their labors and merits.”

Although the tapestries have now left the Sistine Chapel, they can still be seen behind glass on a rotational basis at the Pinacoteca (art gallery) of the Vatican Museums. 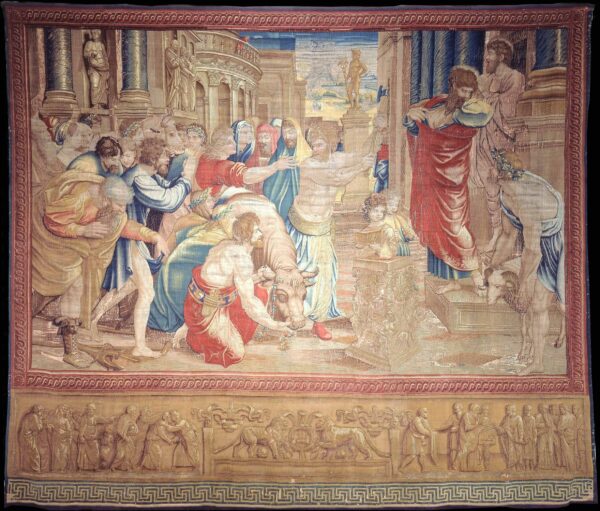 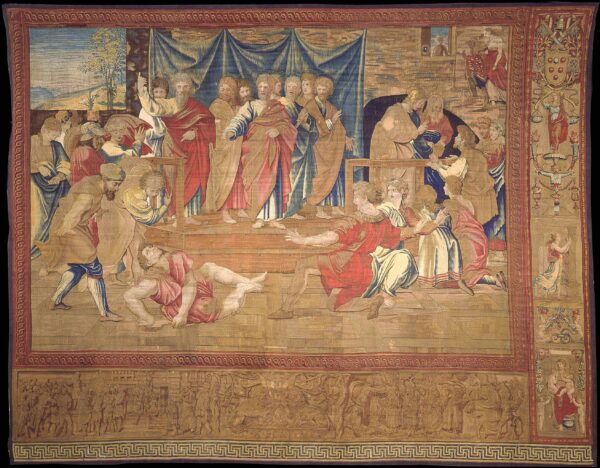 The Vatican Museums are just one of many world-renowned institutions that are celebrating what some are calling “Raphael 500,” with exhibitions and events, marking Raphael’s brilliance half a millennium after he died. Currently the exhibition “Raphael and His Circle” is at the National Gallery of Art in Washington. The “Acts of the Apostles” cartoons in the Raphael Court at the Victoria and Albert Museum in London will reopen in late 2020 after an extensive gallery and display renovation.

The titles of “Acts of the Apostles” tapestries in this article come predominantly from the titles of Raphael’s cartoons in the Royal Collection Trust.