The Allegory of ‘Folly Driving the Chariot of Love’

A rare drawing by Giuseppe Bezzuoli for auction at Christie's

NEW YORK—All we need is love, the saying goes, but what happens when the reins of love are taken over by folly? Considering our fallibility as human beings, we need reminders to stay on course. We need encouragement to keep a steady grip on the reins of our own consciences. Perhaps that is what Marchese Carlo Gerini had in mind in the spring of1848 when he commissioned Giuseppe Bezzuoli (1784–1855) to paint the allegory “Folly Driving the Chariot of Love” on the ceiling of his palace in Florence.

“It was possibly done in the occasion of a marriage,” said Furio Rinaldi, the old master drawings specialist at Christie’s in New York.

The monumental cartoon drawing that Bezzuoli created in preparation for the fresco ceiling will be sold at auction at Christie’s “Old Master & British Drawings” sale on Jan. 30. 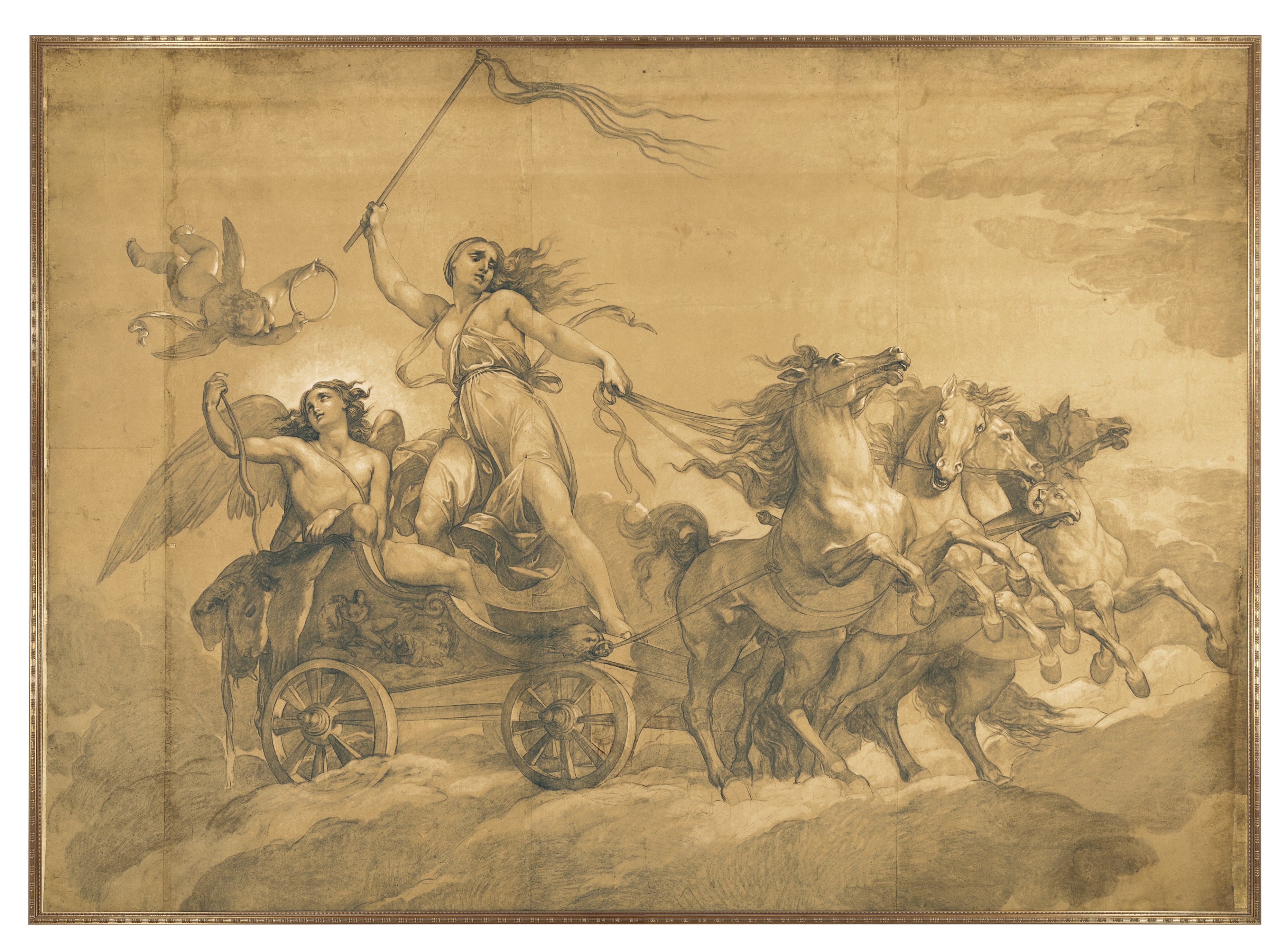 It depicts the winged Roman god of love, Cupid, wearing his typical quiver, but the arrows are not shown. He is holding his bow, but the bowstring is not there. The missing parts of his attributes perhaps indicate that he has to recover them before he can meet his target. He passively rides his chariot which has been taken over by a woman who personifies folly. With a deranged expression in her eyes, Folly stands in command at the front of the chariot with a whip in one hand and the reins in the other. Half naked, with her hair blowing in the wind, she lashes the four steeds that are struck byfear because they don’t recognize the owner of the chariot anymore. 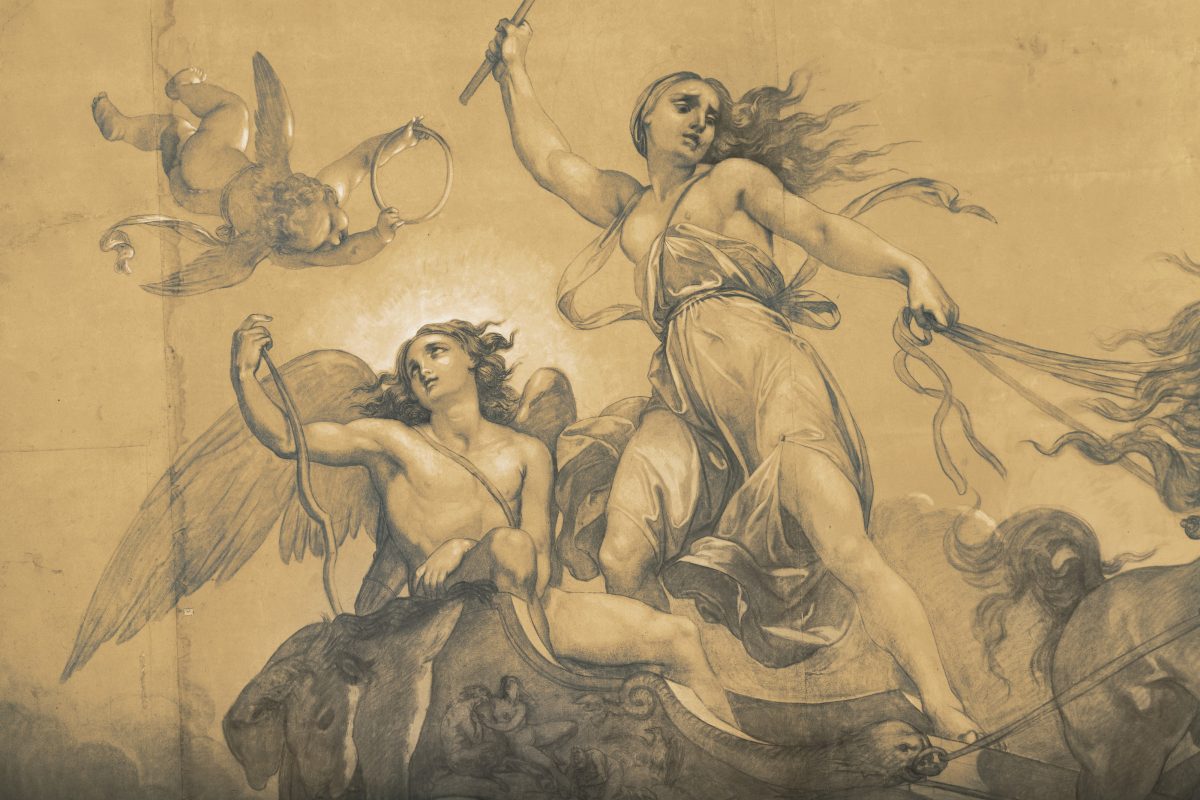 In contrast, Cupid, or Love, calmly rides in the clouds. He is imbued with a sweet expression, blinded in illusion, and oblivious of who is standing in the driver’s seat of his chariot. Yet not all is lost it seems, because Love looks to a flying cherub who is carrying a ring. Representing innocence, the cherub hovers above Love in stark contrast to the derangement of Folly and the runaway horses. 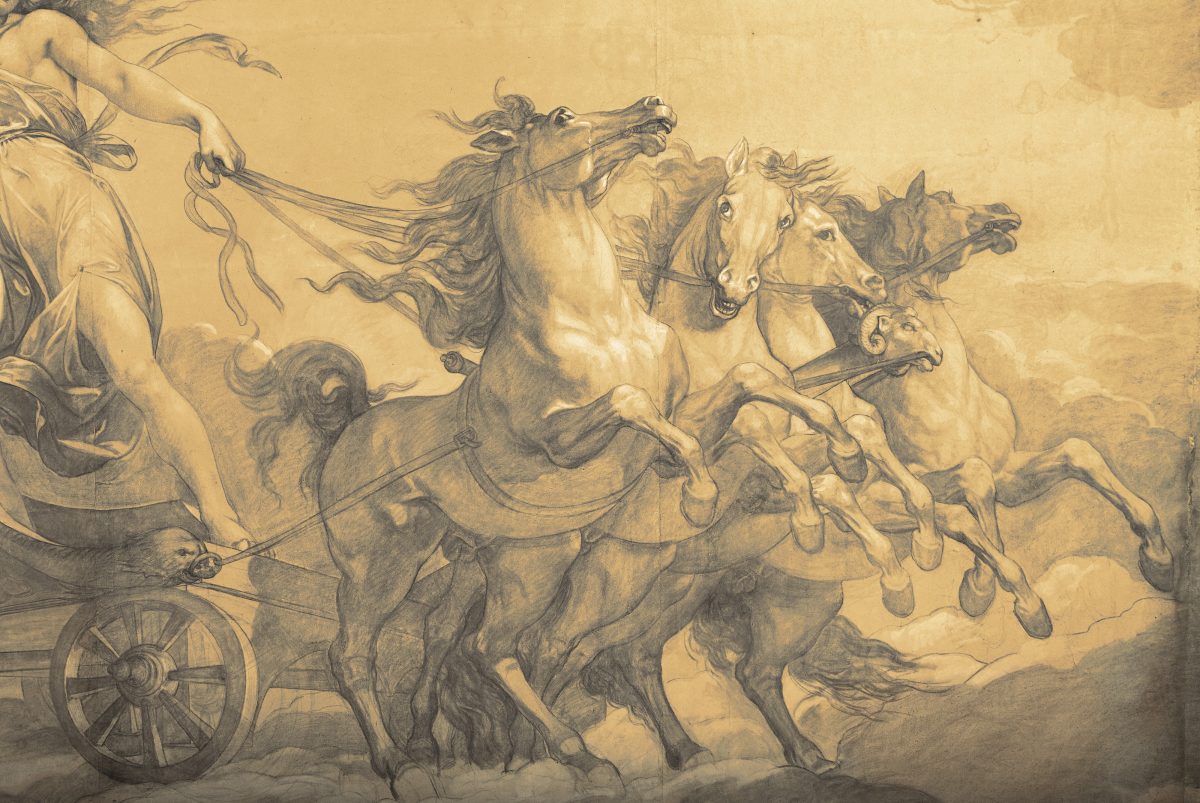 The key to this allegory is in how it shows the contrast in feelings of pure love against unbridled lust. The visual contrast between the figures lends one to easily imagine the consequences of either choice: conscious restraint, leading to a responsible union, or unconscious abandon, leading to folly. But the drawing doesn’t just illustrate this dichotomy.

The wonderful aspect about allegories is in how they encapsulate the complexity of one’s internal psychic struggle with opposing forces, on various levels. Each time one looks at this drawing, depending on one’s own state of mind, it can be interpreted differently.

“What I really like about the putto [the cherub] is that he’s against the dark, and light comes from the halo of Love, which is really beautiful,” Rinaldi said at a private viewing in Christie’s at Rockefeller Center.

Filling a Gap in History

“Folly Driving the Chariot of Love” arrived at Christie’s unattributed, so every little discovery and connection made in the process of Rinaldi’s research for nearly a year was surprising. There was a vague record of the drawing having been made by Bezzuoli, but the name got lost, and it was thought to be by Filippo Brunelleschi (1377–1446), Rinaldi explained. So for some time, he was not sure if the drawing was for the fresco-ceiling painting in the palace of the Marchese Carlo Gerini or for something else. It was difficult to discern, especially because there was little evidence; the fresco had never been reproduced before. Christie’s finally published a photo of it for the first time in its “Old Master & British Drawings” sale catalog. 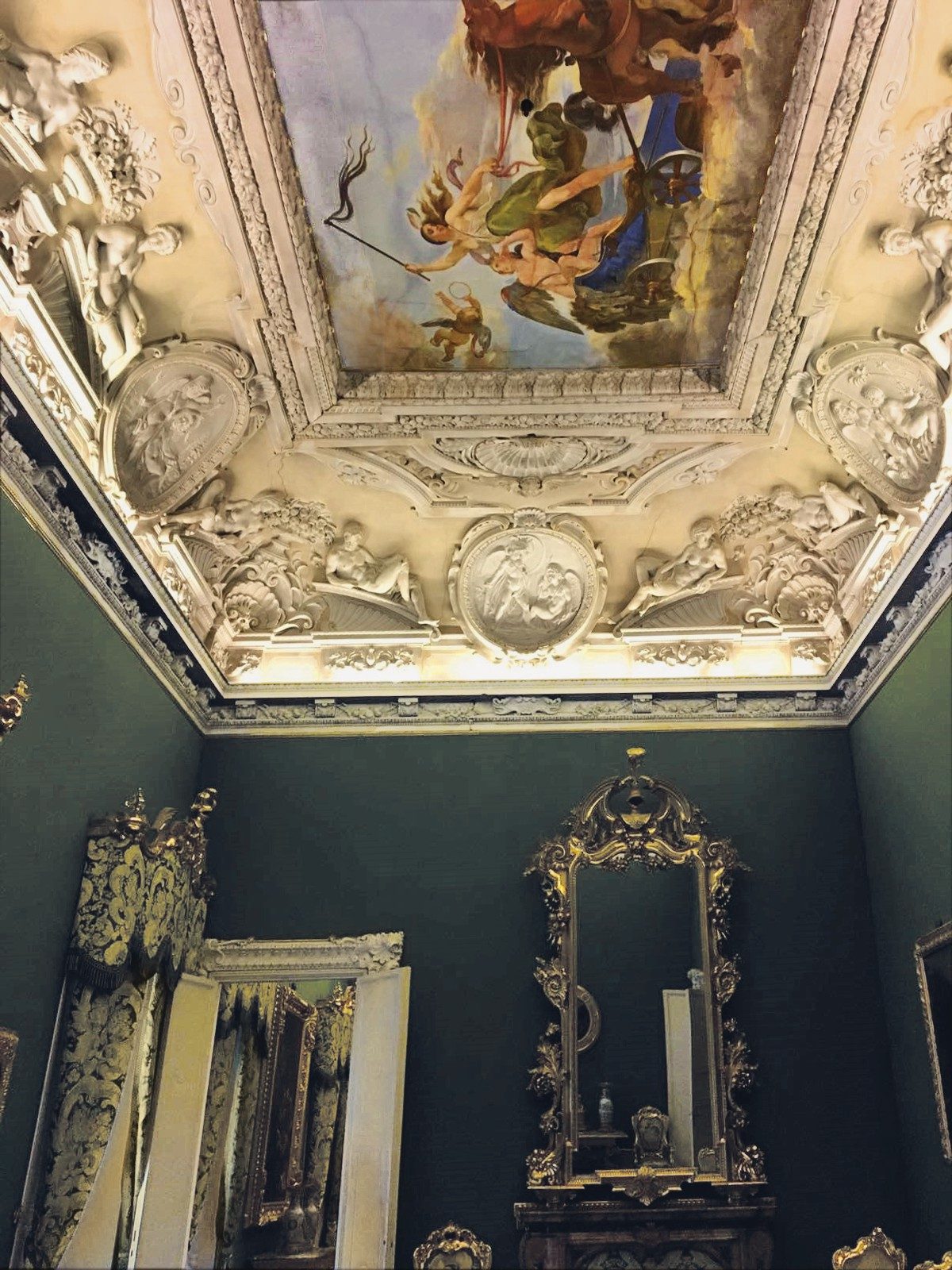 Luckily, a similar painting in the Galleria d’Arte Moderna at Pitti Palace in Florence, which was the preparatory painting (color study) by Bezzuoli for the same ceiling painting in the private palace of Gerini, allowed Rinaldi to make the connection and find the attribution. The beauty of Rinaldi’s work is in discovering the history of a piece of art that had been forgotten. “You kind of bring them back to life,” he said.

The ceiling fresco was executed in 1848, and Bezzuoli died a few years after.Rinaldi believes the cartoon probably stayed in Bezzuoli’s workshop for a while. It still has a little stamp with the number 96 written on it, which is probably a stock number from his workshop. The stamp, placed at eye level below the wing of Love, is an intriguing little detail. Along with the minor humidity stains on the paper showing signs of time, the stamp adds to the character of the piece. 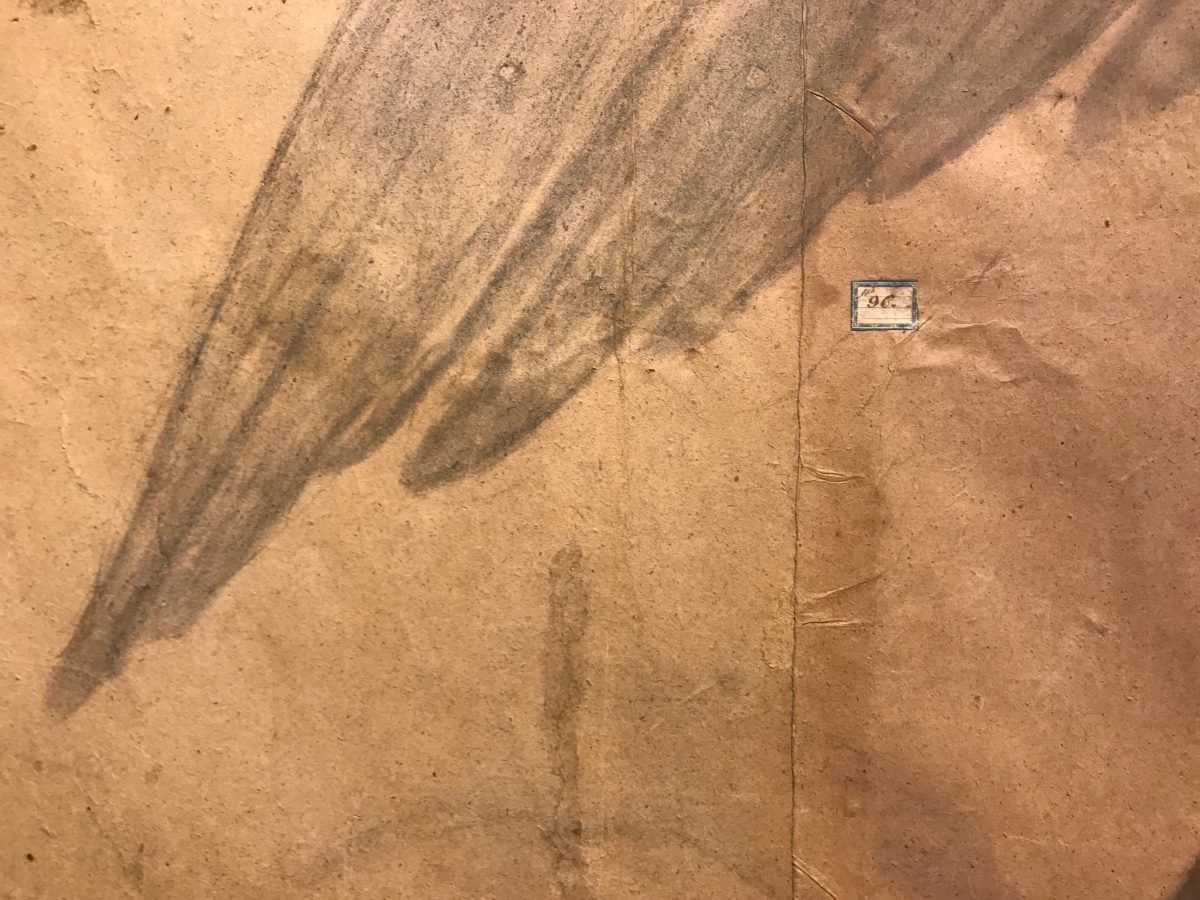 It is extremely rare for such a large cartoon drawing (about 11 feet by 16 feet) and one in such excellent condition to survive. Rinaldi called it a miracle, because “cartoons are usually the first thing that gets destroyed in the design process,” he said.

They are used for transferring the drawing onto a painting surface (canvas, panel, or wall) and get damaged in the process. But in this case, “Folly Driving the Chariot of Love” is both a cartoon and a finished drawing. It has neither incisions from sharp tools nor any punctured holes for the tracing or pouncing methods of transfer. Instead, semitransparent tracing paper was possibly used to copy the drawing, which was then transferred onto the ceiling.

Cartoon production reached its apex in the 19th century, showing a degree of finish that was much higher than for the 16th-century Renaissance cartoons. This cartoon by Bezzuoli “gives you a sense, although from another century, of what great cartoons by the great masters should have looked like, … even if so few survived,” Rinaldi said. 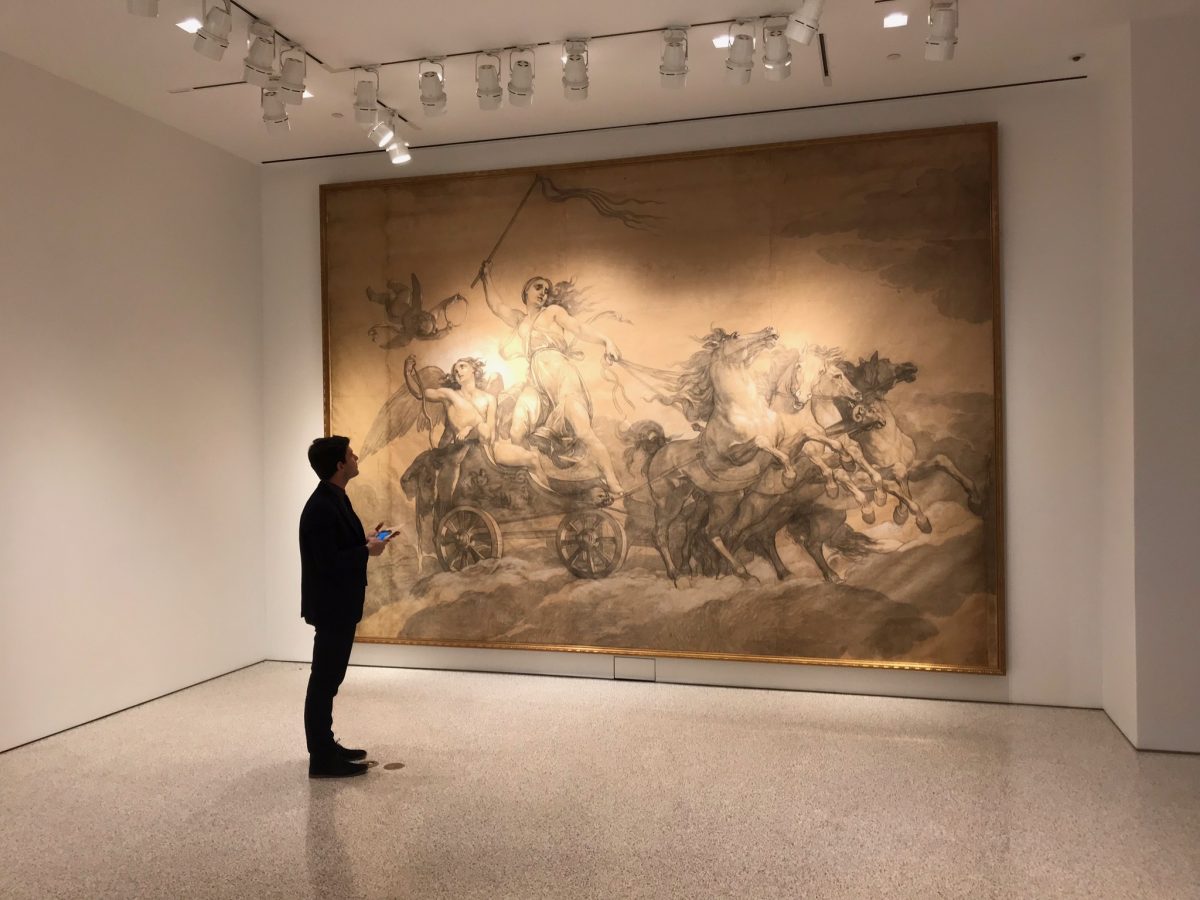 Rinaldi has seen very few other drawings of such size and importance. He named Giulio Romano’s (1499–1546) cartoon for “The Martyrdom of Saint Stephen” in the Vatican Museums, and a large cartoon by Federico Barocci(1535–1612) with “The Last Supper” in the Uffizi Gallery as the onlycomparable examples.

“The composition is really channeling the old masters, but at the same time translating it into something completely new and different,” Rinaldi said. “Bezzuoli is a prime exponent of the Italian Romantic movement, but also of neoclassicism, in his love for the great masters of the 17th century.” His work has often been compared with French masters and he is said to have been a friend of Jean-Auguste-Dominique Ingres (1780–1867). The friendship has not been documented, but Rinaldi believes it is very likely because Bezzuoli was a professor at the Accademia di Belle Arti (Academy of Fine Arts) in Florence at the time when Ingres was visiting Florence.

Dramatizing a Changing State of Mind

One can see several pentimenti, marked changes in the composition, in the wheels of the chariot, in the hooves of the horses, in the arms of Folly, and so forth. “All of these differences in the positioning creates this dynamic in the work, which is quite incredible. It looks almost like they [the figures] are moving,” Rinaldi said.

The composition in the drawing changed slightly as it developed, both in the color-study painting (the model for the fresco) displayed at Pitti Palace and in the final ceiling painting itself in Gerini’s residence. It’s probably another reason why this cartoon drawing wasn’t destroyed. Bezzuoli may have wanted to preserve the original composition either for reference or because he made it into a finished drawing that could stand as a work of art on its own. 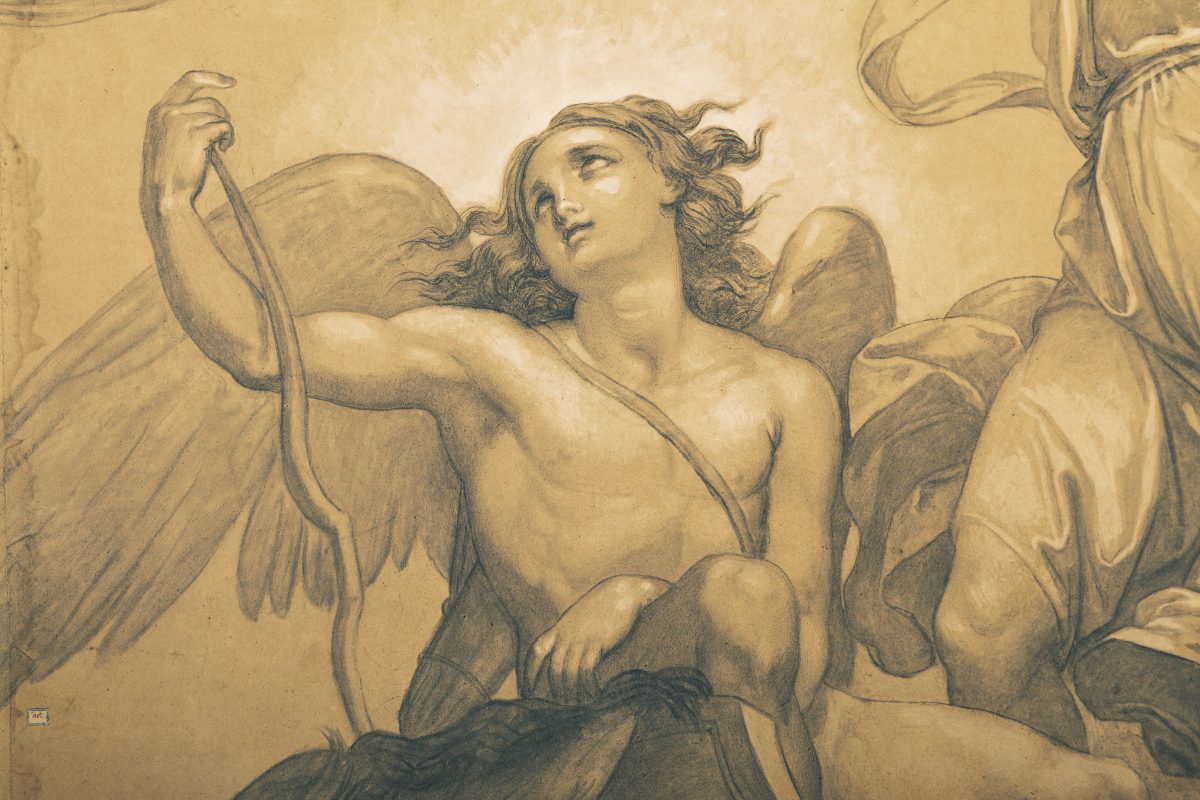 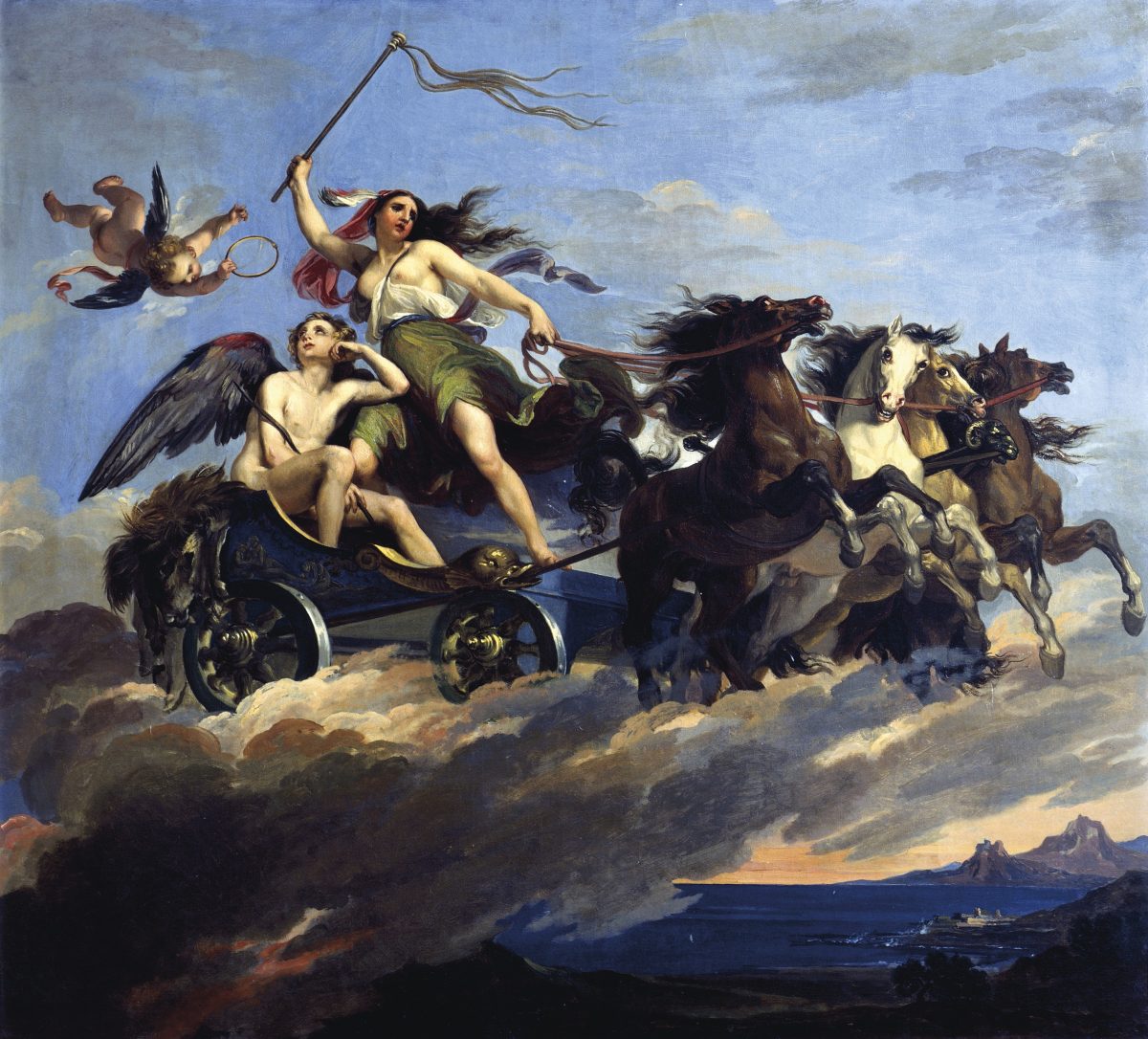 In both paintings, Love is still sitting in the back of the chariot, but in the paintings, he is even more passive. While his left arm leans on the thigh of Folly, his right arm holds his bow, still without a bowstring, in a more relaxed manner resting between his legs. Again, he does not have any arrows, and his quiver is missing entirely. But he is still looking to the ring-carrying cherub, who encapsulates hope and goodness.

Who hasn’t struggled with love confronted by selfishness, or reason confronted by passion? The vastly layered meaning of “Folly Driving the Chariot of Love” is compounded by each figure and attribute representing different emotional or psychic forces. This huge and extremely rare drawing gives an arena to reflect, within a most worthy form, the allegory.