“Virgin and Child Attended by Angels,” attributed to Filippino Lippi (circa 1457–1504). Pen and brown ink, brush and brown wash, highlighted with white gouache. Rogers Fund, 1968. (The Metropolitan Museum of Art)

Simplistic and paradoxically expressive, drawings and the merits of the craft have begun to be showcased in many art institutions around the world. From the recent exhibit “Michelangelo: Divine Draftsman and Designer” at The Metropolitan Museum of Art in New York to the upcoming UK tour of Leonardo DaVinci’s drawings starting in February of 2019, these exhibitions serve to highlight the importance of drawing in the art world and its usefulness to artists in developing their craft.

In the span of two centuries, from 1420 to 1640, drawing developed to its zenith in terms of an independent art form that was able to convey the imagination in new ways. The doodles, sketches, and drafts of the period give us an insight into the minds of the working artists as they used the medium to lay plans, scribble thumbnails for large canvases, or study the designs of nature and the human figure.

“The First Fruits of the Earth Offered to Saturn” by Giorgio Vasari (1511–1574). Renaissance artists looked back to the ancient classic themes to express nuances of the human condition. (The Metropolitan Museum of Art)

At the same time, the arts shifted from the church as the center of learning for the visual language to studios and academies. And with the shift, art moved from being iconographic in nature to being capable of exploring and expressing the infinite nuances of the human condition. 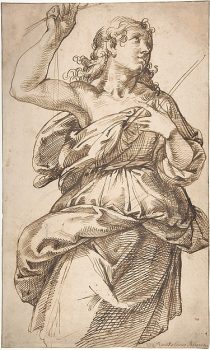 But also, paradoxically, an interest in the sacred blossomed to full flower. Led by the reverence for the Hellenic culture and classical studies, the Italian Renaissance saw the flourishing of self-exploration in the arts and aesthetics along with the development of the sacred sciences. Italian culture at its height put spirituality and morality at its foundation, and these, in turn, were reflected in innovations in the arts. The deep understanding of the divine imbued some artists’ works, like those of Michelangelo, with a vitality and sacredness that could not be conveyed by skill alone. 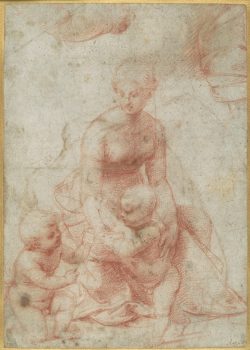 The “gratiosa aria,” or gracious style, was an Italian concept for an artist’s own unique, personal expression developed through years of study. Included in the meaning is the idea that the artist has mastered the ability to depict subjects with grace and beauty.

Cennino Cennini, in his “Craftsman’s Handbook” or “Libro dell’Arte,” discusses emulation of other artists to learn from their cultivated personal style and their sense of beauty to grasp what choices they made to render subjects in a certain way. “If you follow the course of one man through constant practice, your intelligence would have to be crude indeed for you not to get some nourishment from it. Then you will find, if nature has granted you any imagination at all, that you will eventually acquire a style individual to yourself.”

In addition, before gratiosa aria could be fully cultivated and before being able to reproduce its qualities externally, the artist had to develop his or her own character.

The motive or intent in pursuit of the arts is most important. Cennini also stated: “It is the impulse of a noble mind which moves some toward this art, pleasing to them through their natural love … There are some who follow the arts from poverty and necessity, also for gain, and for the love of the art; but those who pursue them from love of the art and true nobleness of mind are to be commended above all others.”

Cennini basically stated that an artist’s pursuit of fame and gain for their sake alone should be tossed out the window. Without a proper state of mind, one would be too insecure and emotionally unstable to fully consider the intricacies of rendering subject matter beyond one’s own immediate, volatile state. 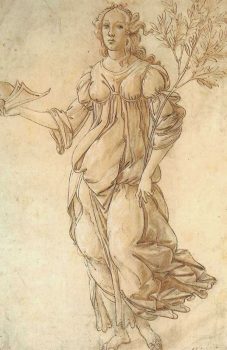 Frank Zöllner’s extensive book on Sandro Botticelli states that “individual style was gaining ground in the 15th century as an identifiable mode of personal composition.”  Thus, artists had more freedom to portray the depths of character, emotion, and personality.

Specifically, Botticelli’s “maniera,” or individual style, had adapted to his subject matter—often women—to embody the calm and nurturing energy of the feminine archetype. Botticelli’s refined use of line characterized the inner strength and airy qualities of the feminine, with refined, wavy, yet confident lines. Many of the women in Botticelli’s paintings offer a salve for chaos with a calm, nurturing, and elegant presence.

“Paradise” by Federico Zuccaro (1540/42–1609). Pen and brown ink, brush and brown wash, watercolor, gouache, highlighted with white gouache, left and central sections squared in red chalk, on three sheets of brown paper, joined vertically. A piece of brown paper with figures of Christ, the Virgin, and St. John the Baptist has been affixed at the center of the drawing. Rogers Fund, 1961. (The Metropolitan Museum of Art)

The Italian Renaissance artists understood that aesthetics can produce a sensation or a feeling in the viewer in a positive way. The benefits of manifesting grace in the arts were intrinsically understood. With an understanding of grace and noble characteristics, artists could not only render their works to be aesthetically pleasing, but also harmonize them and bring serenity to those enjoying the art.

Tools of the Trade

Drawing, in its early days, required a lot more than just putting charcoal to paper. It was an undertaking that saw artists literally clambering over the landscape for the materials they needed, and discriminating among a vast array of variables in terms of the consistency and quality of the materials.

Often, natural black and red chalk is unreliable for making a consistent line because it varies so much in how dense or porous it is. The black chalk dug from quarries in Germany had been prized by Giorgio Vasari as having the best quality, though other artists preferred chalk from other regions.

When found, good quality chalk, for example, was purchased by artists in large blocks at quarries and chiseled to the right size for drawing. In fact, many of the original tools, including brushes, pencils, gessoes, mediums, and fixatives used by the early artists, were 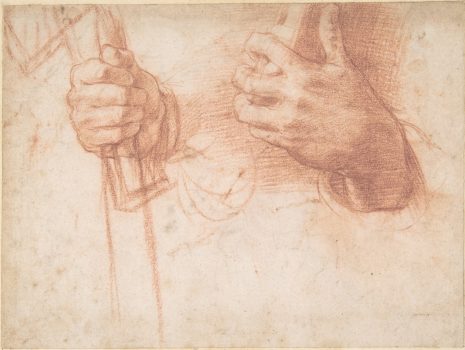 crafted by the artists themselves.Nothing was a straightforward process.

According to “Master Drawings of the Italian Renaissance” by Claire Van Cleave, the ink Leonardo DaVinci preferred for his note-taking and sketches came from iron gall procured from oak trees, mixed with wine and gum arabic. It was a witch’s brew that artists learned to concoct themselves.

The crude materials for drawing also impacted how artists developed their drawings. Ink, chalk, and charcoal were very difficult to erase. Lines, compositions, and the images one wanted to produce had to be clearly established in the mind before an artist executed a piece. Thus, the intimate relationship the artists had with their materials, and the benefits to their craft provided by that relationship, enforced foresight and economy. 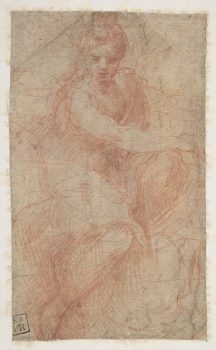 The methods artists favored in their craft varied considerably. Many artists used rapid sketches and slowly refined a composition as they progressed, a method called “primo pensiero.” Some artists completed refined studies of figures, with all of the information included for the final composition or painting, as in the case of the detailed drawing by Raffaello Sanzio da Urbino (known as Raphael). 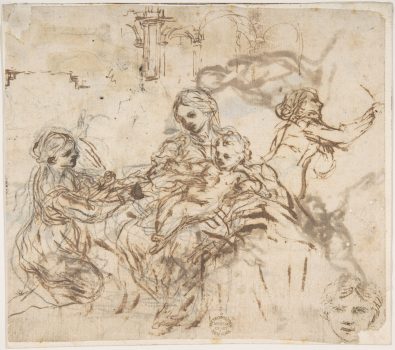 “The Virgin and Child With Saint Martina” by Pietro da Cortona (1596–1669). Pen and brown ink, over black chalk. Gift of Cornelius Vanderbilt, 1880. (The Metropolitan Museum of Art)

Whatever purpose drawing eventually served, the craft had to be learned first. In one sense, drawing can be described as reverse-engineering of the world and transcribing it into a visual form. Anatomy, the study of drapery, the properties of light and their interpretation through line, foreshortening, and shadows all had to be meticulously studied in order to directly engage the world analytically and then be reproduced on paper.

In order to develop accuracy, the eyes had to be retrained. Almost all artists know that the eyes deceive. The eyes and their connection to the brain can be counterintuitive and mysterious. Our brain condenses the nearly infinite amount of information into easy-to-understand symbols to quickly process the world around us.

We see humans every day, but drawing people accurately requires an in-depth study of anatomy. Such a study breaks down the natural inclination of the brain to overly simplify a scene. This not only helps the artist more accurately portray the human form, but also helps to draw the human body without a reference. When unhindered by references, artists can easily recreate anything from their imaginations.

Yet, on the whole, drawings should not be confused with finished works. Before his death, Michelangelo Buonarroti burned many of the drawings he used in preparation for his works, possibly so no one in the future would confuse them with his finished works. In some of his practice drawings that remain, we can see his procedures, anatomical renderings, and even glimpses into his thought process in executing his works. 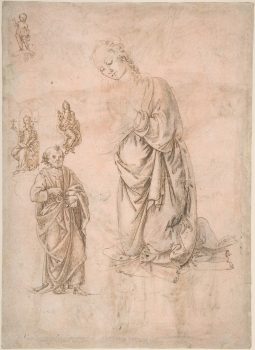 “Sketches of Figures of the Virgin Kneeling,” attributed to Francesco di Simone Ferrucci (1437–1493). Pen and brown ink, over leadpoint or black chalk, on rose-washed paper. Bequest of Walter C. Baker, 1971. (The Metropolitan Museum of Art)

And, sometimes we even see beyond the artists’ working methods to their personalities. In a sketch of a face and eyes in profile that Michelangelo made for his students to copy and study, he added a note at the bottom of the drawing. Michelangelo encouraged his student with “patience Andrea.” In the looser and unedited realm of drawing, the trials, tribulations, and the human element emerges more strongly than in a finished piece. Perhaps this is the most valuable quality of these drawings.

Tim Gebhart is an artist and teacher living in Portland, Oregon.