The Divine Creative Process of Michelangelo

NEW YORK—Michelangelo consigned most of his drawings to the fire. Those were his rough sketches, his fleeting thoughts, perhaps. The few drawings that survived, his contemporaries described as “echoes of the divine.” These were highly prized, even during his lifetime, as they revealed the creative process of “Il Divino” (the Divine One). The Renaissance master, who uplifted the role of the artist, curated his legacy carefully—a legacy that continues to unfold.

Michelangelo was publicly praised as “the Divine One” as early as the age of 31 in an epic poem, and then throughout his lifetime. The accolade remains as true as ever, reaffirmed today with the title of The Metropolitan Museum of Art’s unprecedented exhibition “Michelangelo: Divine Draftsman and Designer.”

“The towering genius of Michelangelo can remind us that art is timeless and larger than ourselves. It nourishes the spirit. Art can provide solace in grief and instill a sense of hope in humanity,” curator Carmen Bambach said at the press preview on Nov. 6. At the end of her speech, she alluded to the exhibition as being “a spiritual experience.” 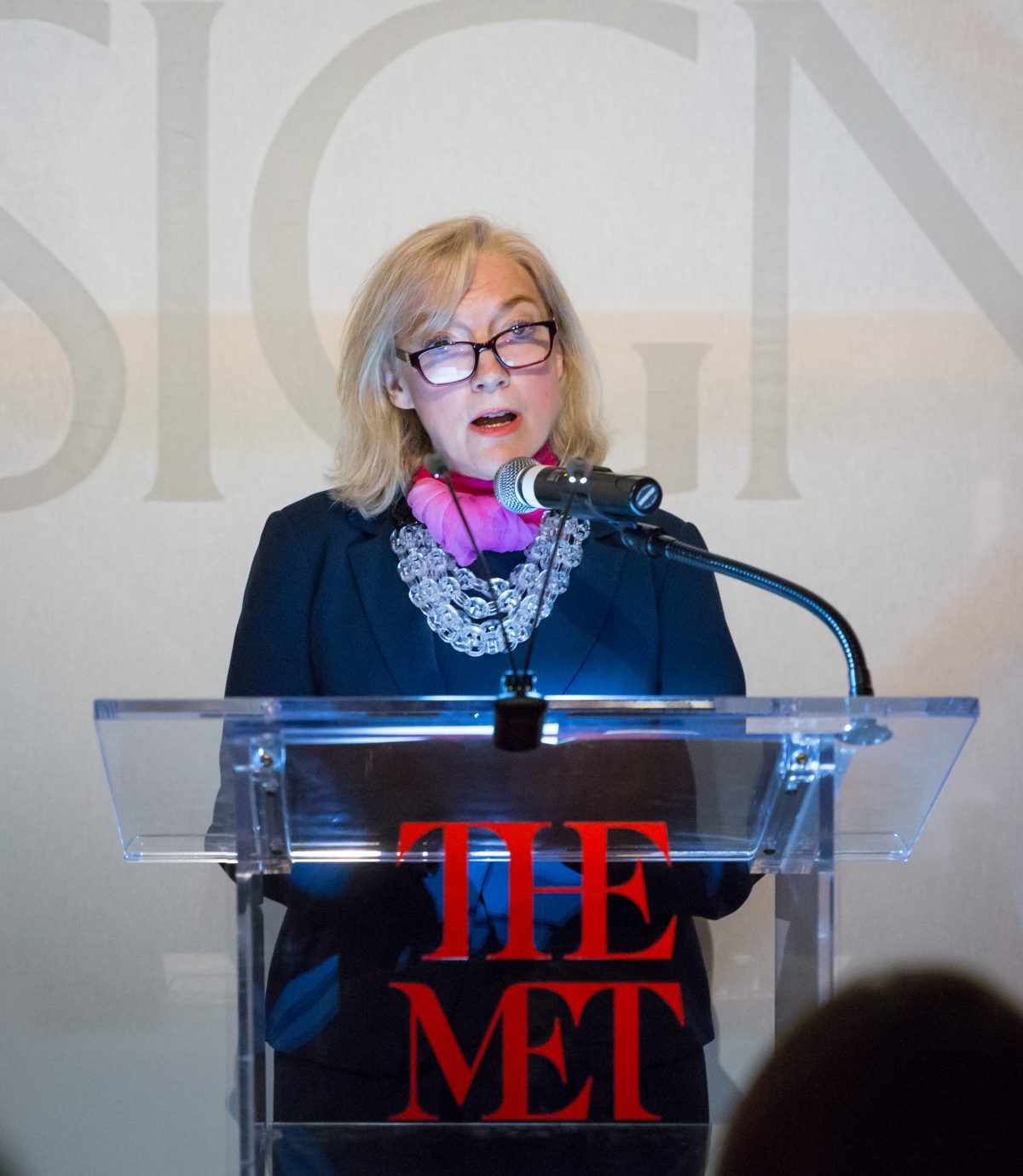 Later, talking with a small group of reporters, Bambach emphasized how Michelangelo’s art still “speaks with a tremendously fresh voice,” even though he lived in a very different time from our own, and with difficulties and joys that played out very differently and in ways that may be incomprehensible to us today.

To enter the world of this master, to be able to see and feel what Michelangelo communicates in his drawings, calls for concentration and contemplation. The Met’s exhibition provides a glorious opportunity to do so, requiring a degree of humility. It highlights Michelangelo’s “disegno”—meaning, literally, both drawing and design in Italian and, theoretically, the aesthetic/ethical pursuit cultivated during the Renaissance.

As if to match Michelangelo’s herculean creative process, in eight years The Met has assembled the largest ever exhibition of the master’s drawings—a total of 128, including drawings in preparation for the colossal marble sculpture of David, the early planning of the Tomb of Pope Julius II, studies he drew for painting the Sistine Chapel ceiling, and an enormous cartoon (full-scale drawing) created in preparation for “The Crucifixion of Saint Peter” fresco in the Vatican Palace.

To give a broader context, the exhibition also includes three of his marble sculptures, his earliest painting, his architectural model for a chapel vault, and his poetry and letters, as well as about 70 works by his teachers, pupils, collaborators, and the artists he influenced. 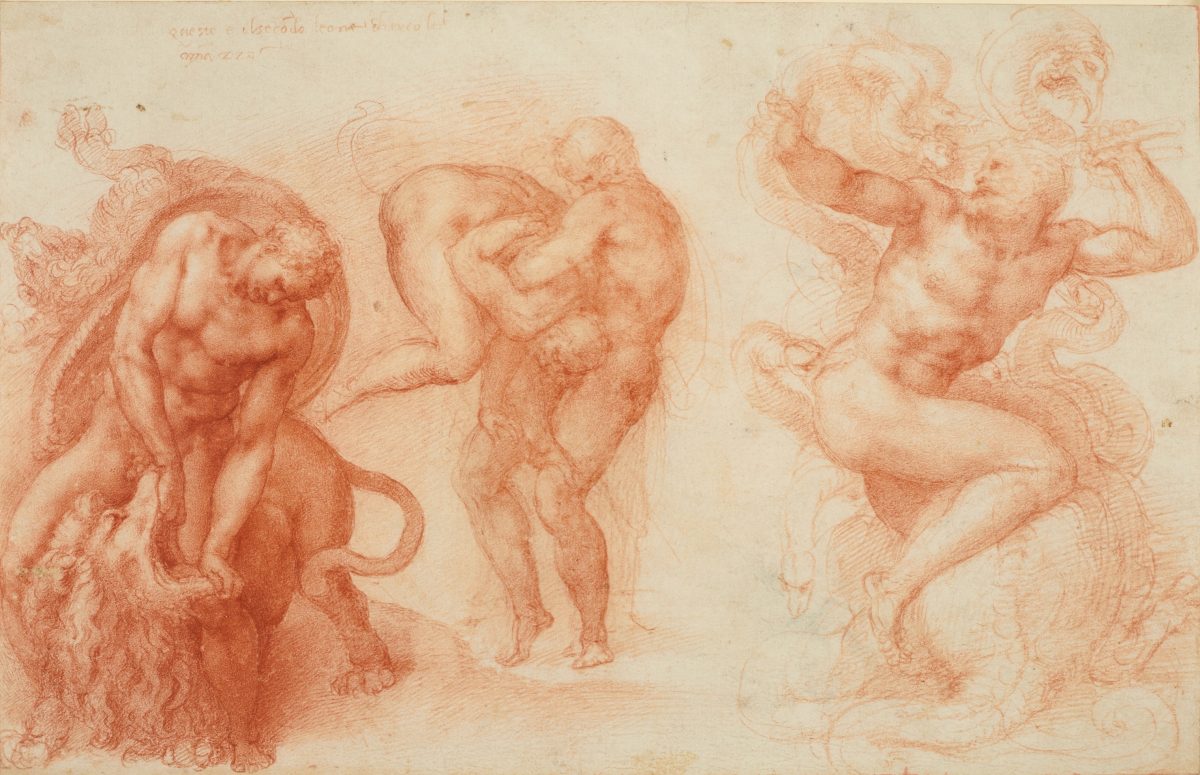 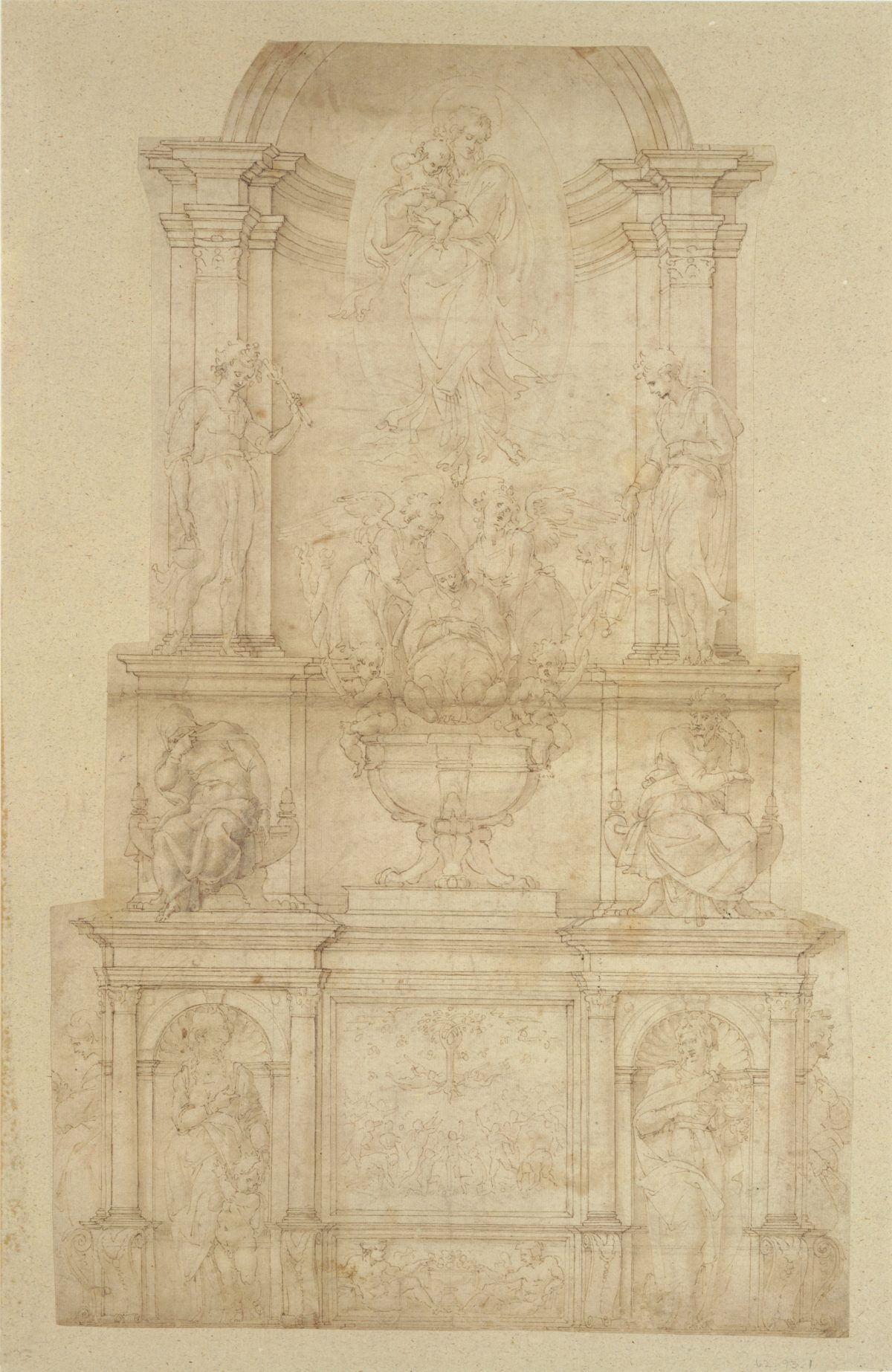 Connecting threads in Michelangelo’s artistry can be found in a way that has not been possible before. The rarely displayed works are on loan from about 50 top collections from 35 cities in Europe and in the United States. It would otherwise take 20 years for a scholar to gain access to all of these works, let alone be able to see them all in one place.

Michelangelo’s boundless imagination, his force of character, and his virtue are displayed for all to see in this monumental exhibit for three months, until Feb. 12, 2018. It’s a generous run, considering the fragility of the drawings and utmost care needed to conserve them by limiting their exposure to light.

The exhibition catalog will remain as a permanent record. It’s only when seeing these works in person, however, that one can fully appreciate Michelangelo’s “terribilità,” the awe-inspiring grandeur he was known for. One can get the tactile sense of how he carved into the paper, with hard-pressed contours. One can see the incredible way his works, these inanimate objects, evoke a sense of perpetual, dynamic movement. 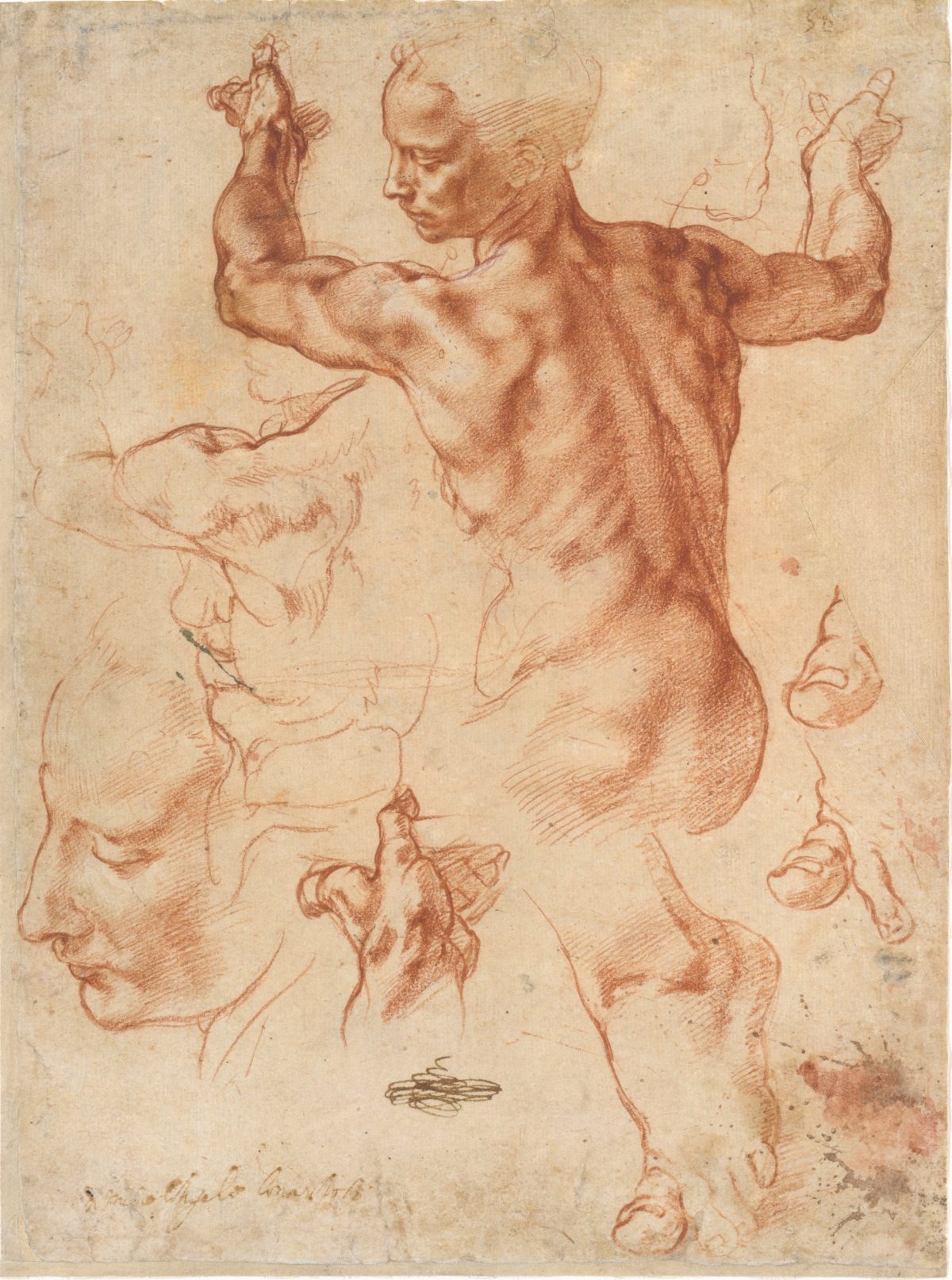 “In seeing the originals, we really get a sense of the artist’s hand, the artist thinking on the paper,” Bambach said. Up close, we can see Michelangelo’s uncontainable creative force, as if his hand could not keep up with his passion in making the invisible visible. “It’s almost like a feral sort of explosion of ideas and beautiful images on the paper.”

Though much has been written and documented about Michelangelo, including the five biographies written during and shortly after his lifetime, this exhibit extends our understanding of him.

It showcases Michelangelo’s training in the workshop of Domenico Ghirlandaio, and the perspiration that buttressed his genius. Framed in a biographical context, it touches on the conversations he had with antiquity; his rivalries with classical antiquity and with his contemporaries; his extremely calculated collaborations with other artists, such as with Venetian artist Sebastiano del Piombo (1485/86–1547); his poetry and letters; and his deep friendships and gifts exchanged, including those with the nobleman Tommaso dei Cavalieri (1509–1587), and the poet and noble widow Vittoria Colonna (1492–1547).

When Michelangelo drew for himself, he made very quick, intuitive, spontaneous sketches. When he communicated with other artists, assistants, or workers in the quarries, he produced detailed drawings, in a dry style of draftsmanship, where his hand is not as recognizable because these were about communicating information. His anatomical studies, magnificent in finish, show hatchings and cross-hatchings that parallel the way he carved his sculptures, Bambach explained. 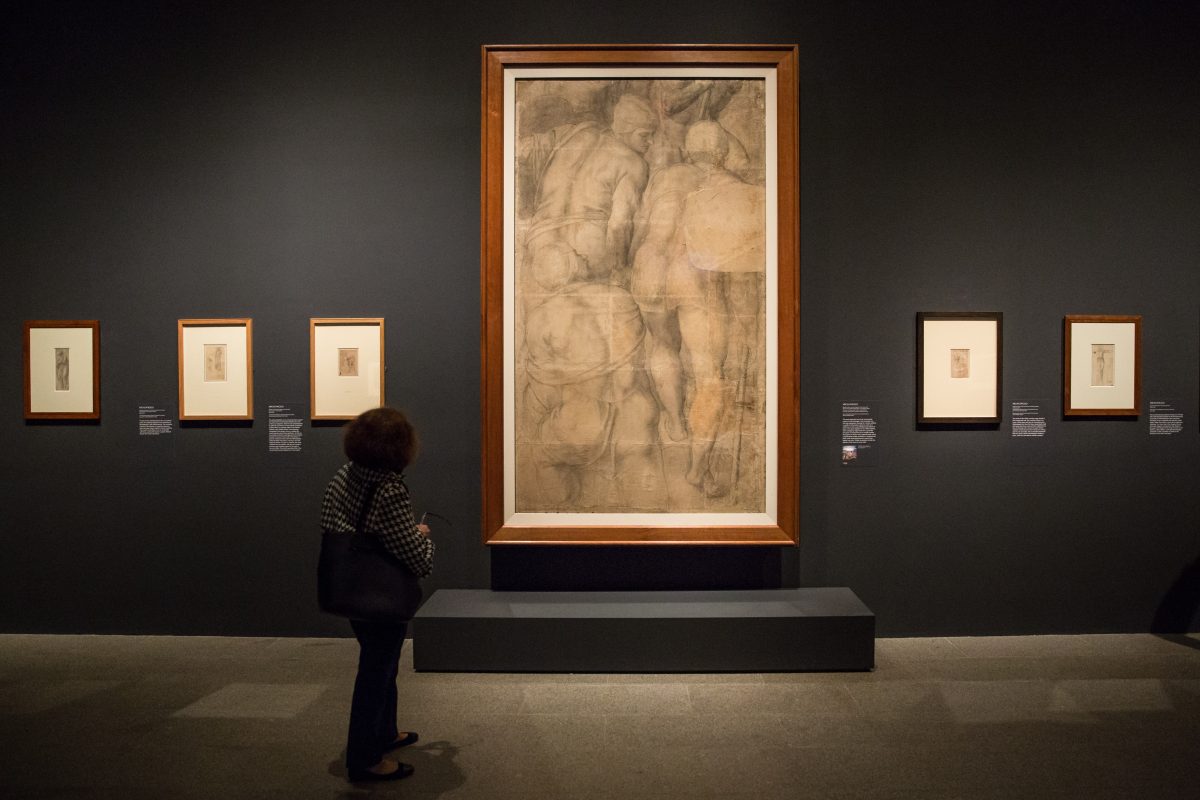 A woman views Michelangelo’s cartoon with a group of soldiers for the Crucifixion of Saint Peter” at The Metropolitan Museum of Art in New York on Nov. 6, 2017. (Benjamin Chasteen/The Epoch Times)

“For Michelangelo, drawing is a language,” she said. The artist considered himself mainly a marble sculptor, but he was also a painter, an architect, and a poet. The initial foundation for whatever he created or wanted to communicate started with drawing. He rarely theorized about his creative process in writing.

“This is a man that, when he speaks, he speaks best in poetry,” Bambach said, smiling.

One of his most famous sonnets, probably intended for Colonna, is most telling of his Neoplatonic artistic theory. The first stanza reads: “Not even the best of artists has any conception / that a single marble block does not contain / within its excess, and that is only attained / by the hand that obeys the intellect.” 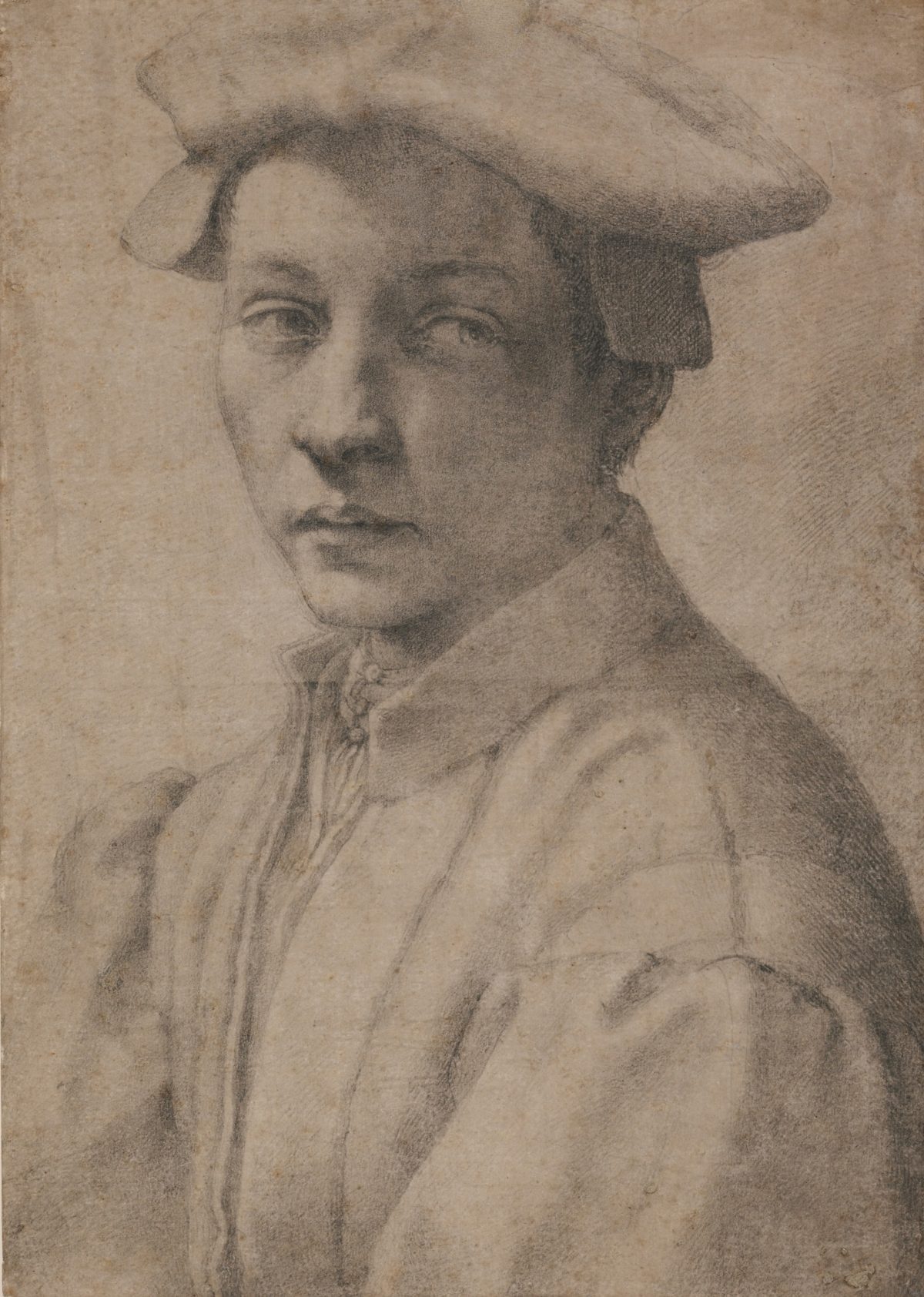 The connection between his heart, mind, and hand had to be integrated in the making of art, Bambach emphasized. Michelangelo valued disegno as a practice of fully concentrating and laboring to achieve a mystical union with God and thereby infusing it in his art. It is no wonder that his contemporaries venerated his work, calling it “an echo of the divine” and would commission work exclusively “by his hand” (“di sua mano”). In tandem, his handwriting was beautifully crafted and his poetry sublime.

Some of the most delightful and rarely seen drawings exhibited include the gifts Michelangelo gave to his greatest friends, such as the four surviving drawings he gave to Tommaso de’Cavalieri (on loan from the Royal Collection of Her Majesty Queen Elizabeth II).

The drawing, titled “The Dream,” depicts a flying angel playing a trumpet pointed directly between a young man’s eyes (the location of the third eye and the site of the imagination in Aristotelian-Galenic thought). The man sits on a box containing theatrical masks and leans back on a sphere, conveying the idea of the earthly world as a stage. The angel awakening the man from the “dream” perhaps reflects Michelangelo’s status as an artist awakened—through his love of beauty and deep belief in God. 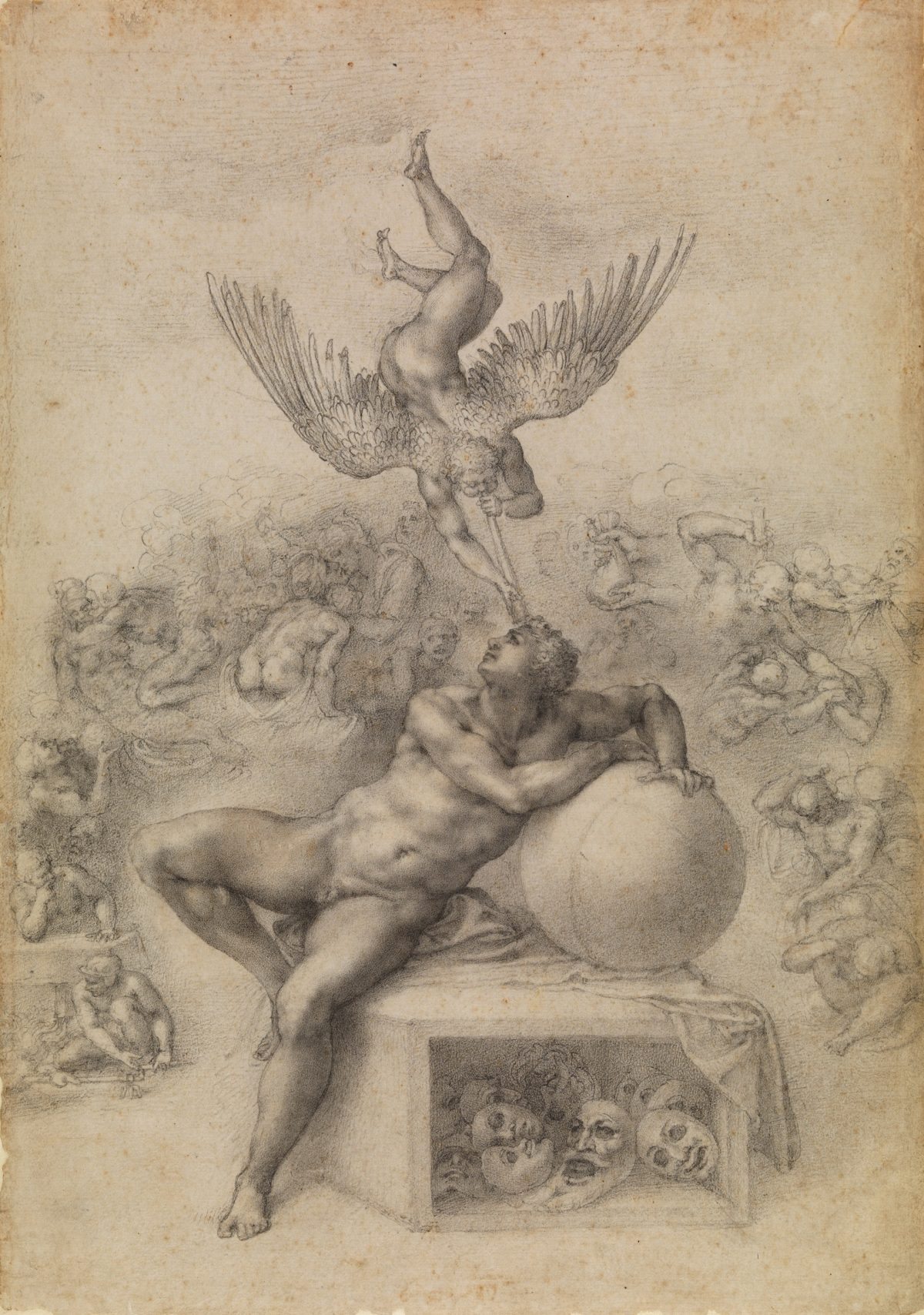 “There is something tremendously beautiful in observing these drawings that are the maximum perfection of Michelangelo’s disegno,” Bambach said. “They are essentially the jewels of his draftsmanship.”

The poems he exchanged with Colonna and the drawing he gave her of the Pieta, on loan from the Isabella Stewart Gardner Museum, attest to the “amazing the profundity, the depth of their belief in God and abnegation,” Bambach said. 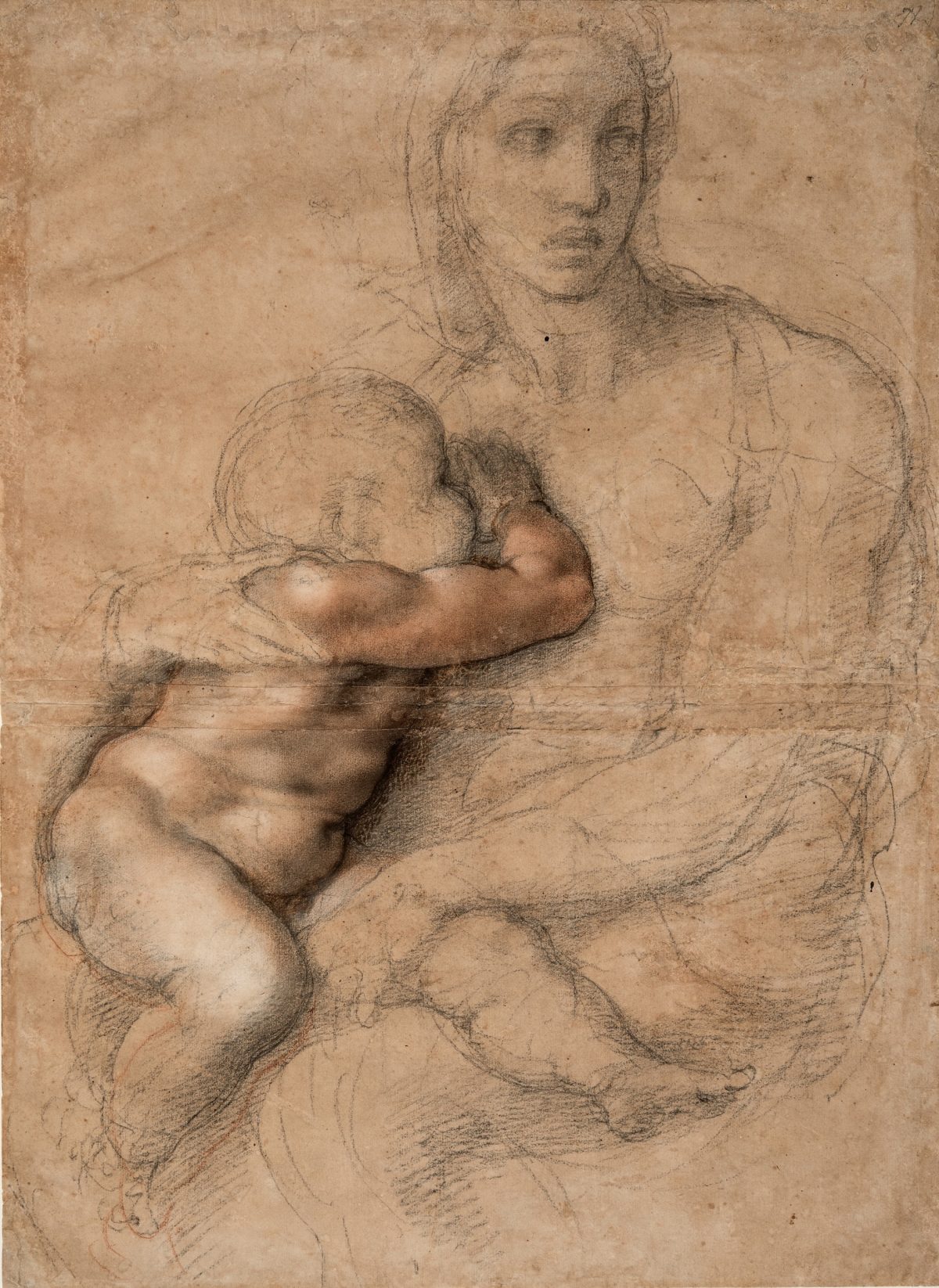 Michelangelo wrote a sonnet for Colonna, alluding to the immortality of art: “How can it be, Lady, as one can see / from long experience, that the live image / sculpted in hard alpine stone lasts longer / than its maker, whom the years return to ashes?”

Michelangelo Buonarroti (1475–1564) lived nearly 89 years. His longevity was extraordinary for a person of his time. The Met’s exhibition of the divine draftsman and designer has extended Michelangelo’s immortality even further. It “may serve as a reminder that 500 years can melt away as we look at the drawings, sculptures, and paintings by this fiercely creative artist,” Bambach said.