The Fearless Compassion of St. Roch

Recently, there’s been quite a bit of fear in relation to the coronavirus. The media reports on it constantly. States are declaring states of emergency, and store shelves are emptying as people are buying supplies to prepare for the virus. The World Health Organization has declared the coronavirus a pandemic.

This isn’t the first time that Western civilization has confronted the fears of a pandemic. The Black Death, a pandemic of the bubonic plague, terrorized Europe between the 14th and 17th centuries. Within five years of its arrival in Europe, it is estimated to have killed 20 million people—a third of the entire population of Europe. It then disappeared and returned repeatedly for the next 300-plus years.

How did Europeans between the 14th and 17th centuries deal with their fears of the Black Death? Many of them turned to their faith for comfort. Some, unfortunately, used the supernatural negatively as a way to legitimize the persecution of Jews. Others, however, used their beliefs in the supernatural as a positive response to the epidemic.

In the Catholic tradition, art became a way of not only learning religious lessons and stories but also giving solace to believers in distress. According to art historian Dr. Louise Marshall, “In setting up hierarchical relationships of mutual obligation between worshiper and image, those who lived during the pandemic were not neurotic and helpless, but were taking positive—and in their eyes effective—steps to regain control over their environment … ”

She also writes: “Throughout the pandemic, for many towns the first line of supernatural defense remained the local patron saint. At the heavenly court, the local saint could be relied upon to plead the community’s cause with all the vigor and passion of a citizen on an urgent embassy to a foreign dignitary.”

In other words, during the Black Death, people used imagery to pray to a patron saint who would serve as an intermediary between the sick and heaven. These patron saints included St. Sebastian and St. Rosalia. St. Roch, however, became a saint specially invoked against the plague.

According to “The Golden Legend or Lives of the Saints,” Roch was born in Montpelier, on the border between France and Italy, to a noblewoman who was barren until she prayed to the Virgin Mary. Roch was born with a birthmark of a red cross and was a very devout Christian from an early age.

Roch’s wealthy parents died when he was 20. Upon their death, Roch gave away all of his riches and went to Italy to help those sick with the pestilence. He went from town to town, clearing away the pestilence with miracles: through prayer, making the sign of the cross, and by the touch of his hand.

After visiting a number of towns, an angel told Roch that he would get the plague himself. The townsfolk of Piacenza, Italy, where he was, expelled him; he then lived in a nearby wood, where he fashioned a hut out of branches and leaves.

Despite his condition, Roch spent his time in cheerful prayer. A spring miraculously appeared and supplied him with water, which tempered his fever. A dog belonging to a count living nearby brought him food and licked his wounds, which healed him. Later, during a hunting excursion, the dog led Count Gothard to Roch, and the count became Roch’s follower.

Despite still being ill himself, Roch continued his mission. He entered the nearby town to heal plague victims. Soon, however, Roch asked God to be healed and was granted recovery.

After recovering, Roch returned to the province where he grew up, now at war. He was imprisoned by his uncle, who did not recognize him and believed him to be a spy. Roch, refusing worldly glory, did not reveal who he truly was. Instead, he welcomed prison and spent the next few years in prayer.

After Roch spent five years in prison and was close to death, a light shone forth from inside the prison. His last prayer was that anyone who prayed to him in the name of Jesus would be delivered from pestilence. Upon his death, an angel placed a golden tablet under his head. The golden tablet granted Roch’s dying prayer and included his name so that all came to know his true identity. 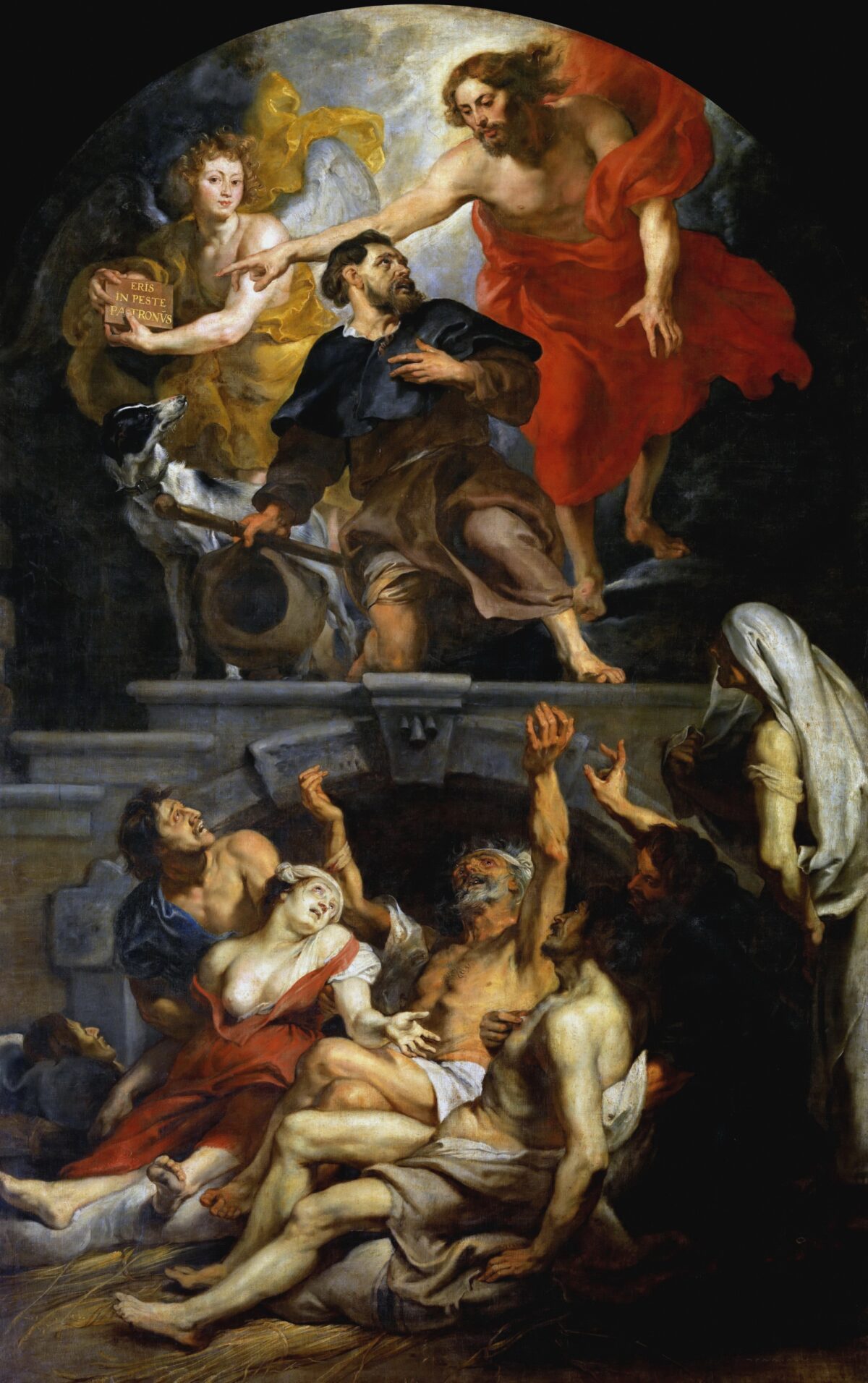 The plague had not entirely disappeared from Europe when Peter Paul Rubens, a devout Roman Catholic and a leading painter for the Catholic Counter-Reformation, painted his “Christ Appointing Saint Roch as Patron Saint of Plague Victims.” It is part of a larger altarpiece, in Belgium, which was completed for the Aalst guild of hops and grain merchants in 1626, whose patron saint was St. Roch.

Rubens composed the scene in an upper and lower half. The upper half depicts four figures: Jesus, an angel, St. Roch, and a dog. Jesus descends into darkness, dressed in a red robe, with a light around his head that illuminates the darkness.

Jesus points to a sign held by the angel that reads, “Eris In Peste Patronus.” This roughly translates as “You are the patron during pestilence.”

St. Roch is shown kneeling on one knee and looking at Jesus. He holds a staff and bag in his right hand and points to himself with his left, as if to acknowledge Jesus’s sign.

In the lower half of the painting, Rubens depicted multiple figures infected with the plague. They look up at the scene above, with their arms outstretched as they ask for relief from their sufferings.

During the height of the Black Death, the fear it inspired sometimes resulted in people abandoning their own infected families.

How might St. Roch’s story and Rubens’s depiction inform us today? During a time of fear, it is easy to think only about our own well-being. Of course, we should consider our well-being, and we should definitely make sure that our families are safe. But we should also, I think, remember to not let our fear prevent us from caring for others.

Faith and compassion is what I take away from St. Roch’s story. One thing the Europeans’ response to the Black Death incorporated was faith in a benevolent power greater than themselves. St. Roch did not fear illness or prison because his faith in God was deep and powerful. His goal was to compassionately help the suffering, and he succeeded—which is why, despite his refusal of worldly renown, we are still discussing him almost 700 years later.

Though Rubens depicted a clear separation between the upper half and lower half of his painting, we needn’t interpret that literally. In other words, it is not that heavenly matters are absolutely separate from worldly concerns. The most significant figures in the composition are Jesus, the angel, and St. Roch, but also significant to the composition is the sign at which Jesus points (and our eyes necessarily follow): the sign that signifies St. Roch is patron saint of pestilence. The angel holding the sign looks out at us as if to suggest, “Heaven has not forgotten you.”

Stories like St. Roch’s, in which a human being requests to serve the afflicted, even after his own death, offer a compelling message.  St. Roch refused material gain, but he did not deny the material world, nor did he separate himself from it. The refusal of material gain for oneself is different from the refusal of the material world altogether. With the help of his faith and the resulting compassion, he fearlessly traveled to help as many people in this world as he could, despite his own sufferings, and his compassion extended even beyond death.

I’m guilty of being as fearful as the next person. But St. Roch’s story and Rubens’s depiction remind me to strengthen my faith and my compassion and to be a source of comfort for others—for anyone—during these trying times as the world confronts a new viral threat. If our faith and compassion are strong, maybe the miraculous will happen for us too.