The Great Flood and What It Tells Us

Perhaps no myth—if myth it be—is more relevant today than the myth of the Great Flood that nearly destroyed humanity at some unknown point in the past.

We colloquially use the term myth, of course, to refer to things that never happened in an historical sense, though in the case of the Flood, there is some doubt because it seems that virtually all cultures and races have some recollection of this event: the ancient Assyrians, Egyptians, Babylonians, Greeks, Chinese, Aboriginals, Andean, and many more. Indeed, the only culture that I am aware of that does not have a Flood myth is, ironically given its current location near tectonic plates, the Japanese.

The point is that the testimony of mankind from earliest times, and so nearer that point of origin, is more telling than scientists, usually for ideological reasons, trying to discredit the story.

The Assyrian King Ashurbanipal (668 B.C.–627 B.C.) whose greatest achievement (according to himself) was the library at Nineveh, which was found and excavated in the 19th century, wrote that he made himself master of all types of writing, including the “dark Akkadian language which is difficult to rightly use”; and then he adds, “I took my pleasure in reading stones inscribed before the flood.”

This seems an astonishing remark and a highly credible one, too: He knew how to read the language before the Flood. Certainly, something of an extraordinary and catastrophic nature occurred which indelibly marked the memory of mankind—so that even 2,700 years ago it was a source of awe and wonder to King Ashurbanipal. 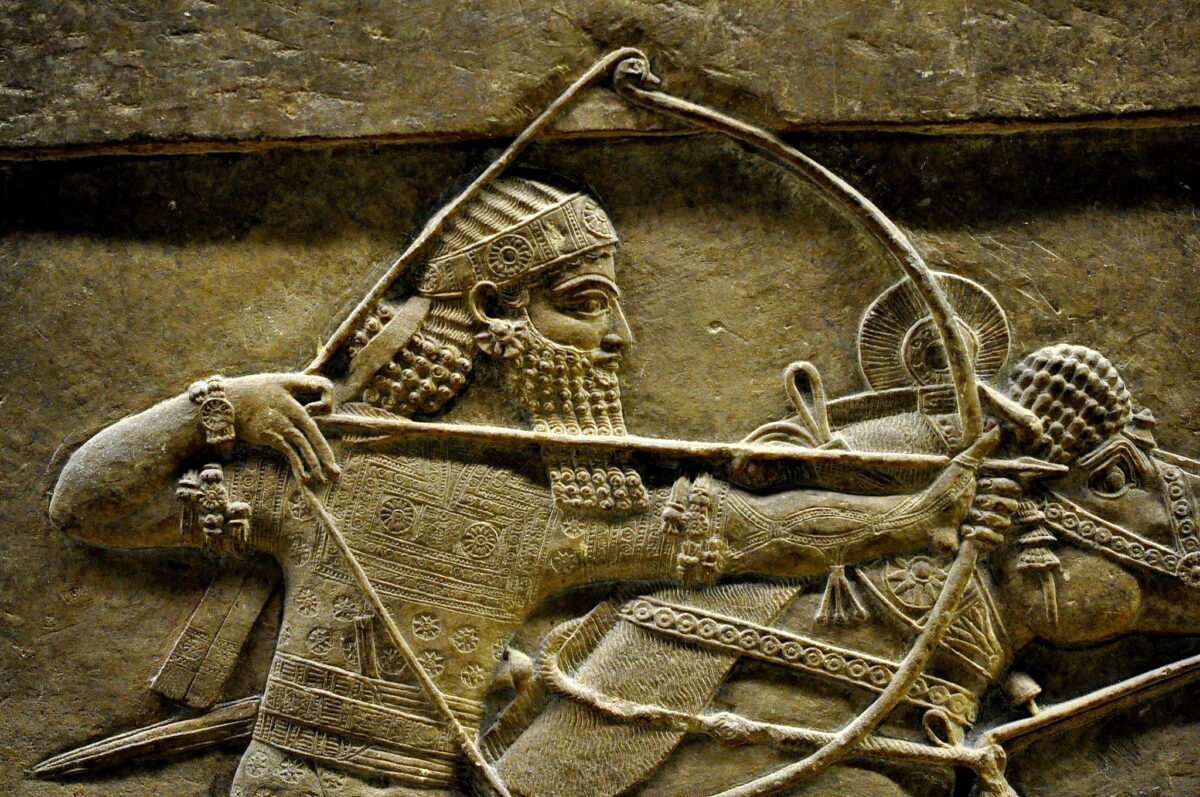 And, incidentally, it was the discovery of this library that led to the recovery of the specific Babylonian Flood myth.

There are, then, various versions of this Flood story from across the world, which differ in all sorts of ways, but my favorite is the biblical one of Noah and his ark. It is instructive to compare it with the wonderful—and seemingly older—version that was uncovered at Nineveh.

What is significant to me is what the popular theologian of the 20th century J.B. Phillips once termed the “ring of truth.” This idea is difficult to quantify, but it centers around the idea of plausibility. If we look at the Babylonian myth, for example, in “Epic of Gilgamesh,” the Great Flood ends with its hero, Utnapishtim, being rewarded by the gods with immortality.

he story with Noah ends quite differently, for there are some highly discordant notes. First, that he gets drunk, and as a result of it one of his sons, Ham, gets cursed; Noah does live a long time, but he, too, dies eventually—there is no reprieve from death. The contrast, then, is that the Babylonian myth does end like a fairy story, whereas the biblical account seems to contain— as most biblical stories do—a kind of gritty realism that recalls something that actually happened. In the context of a worldwide flood killing virtually everybody, why recall the fact that somebody got drunk afterward? Unless it actually happened, it appears inconsequential. So this “mythical” story is the one we should mine for meaning. 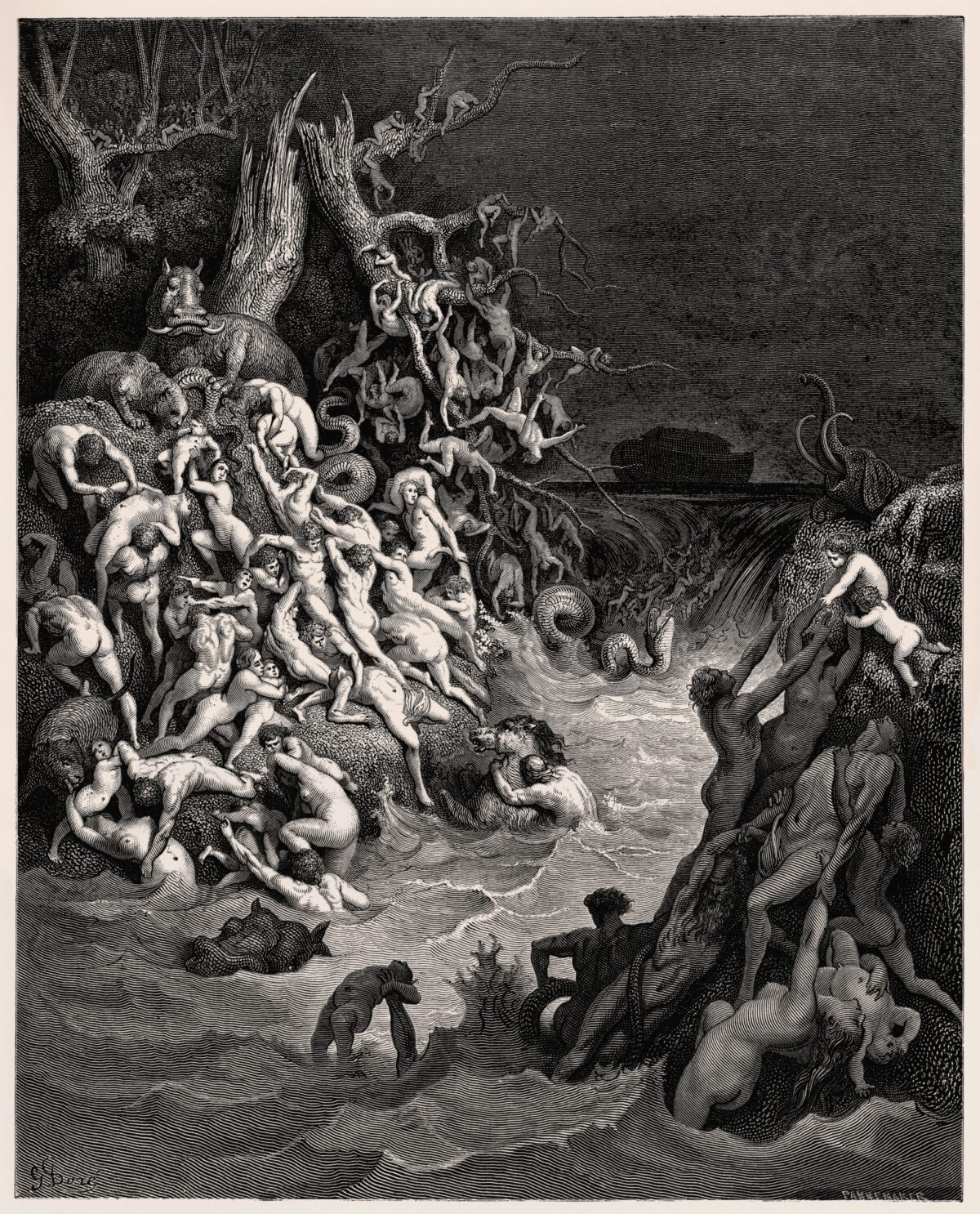 Why, then, is this story more relevant today than virtually any other myth? Two words might point to some sort of answer: Extinction Rebellion. As I write this now, London is being besieged by activists seeking to virtually shut the city down for a fortnight with protests. It claims to have a presence in 72 countries and some 200,000 supporters, including some well-known public figures. And its message is that unless we reverse climate change, billions—if not the whole planet—will die.

How we will die is almost certainly going to be the result of floods and flooding, as the ice caps melt and all that released water raises the sea level. Radical action is needed, they claim.

What is less understood by the population at large, however, is firstly that some of their extreme claims for this cataclysm aren’t actually founded in science itself. Which is ironical, since most scientists don’t believe in the Great Flood, and some don’t believe in the next one!

Second, the prime agents of this movement are possibly as much motivated by their anti-capitalist agenda, as they are by the impending disaster. Put simply, they want to overturn the governments of the world. Their Declaration of Rebellion states that “The wilful complicity displayed by our government has shattered meaningful democracy and cast aside the common interest in favor of short-term gain and private profits.” The rank and file may well not hold these anti-capitalist views, but the leaders do.

Setting these points aside, however, what else is important about this myth for today? The first thing, I think, is truly to realize what its historicity actually means for us now. The nature of the Great Flood and how it happened we cannot tell for certain now, but given its nearly universal acceptance by ancient cultures, that it happened and that most of humanity was wiped out I think we can be sure of.

The thing to understand here is its discontinuity and disruptive nature. Jesus exactly understood this: “In those days which were before the flood they were eating and drinking, they were marrying and giving in marriage, until the day that Noah entered the ark, and they did not understand.” (Matthew 24:38–39). One day, it’s all bright and sunny, but the next is total devastation.

We in the West have gotten used to a philosophy from the Enlightenment, which preaches endless human progress and possibilities that nothing can or will stop. Today this is manifested in the Silicon Valley mindset whereby artificial intelligence (AI) is going to solve all our problems, and whatever problems we have here anyway, no need to fret as Elon Musk is going to help us all settle on Mars—as if, of course, we wouldn’t scramble that planet, too!

But suddenly, we understand, the idea of the Great Flood and the fear of an upcoming flood upsets the status quo and changes all that. The myth—the facts of the myth—warn us against such complacency, and warn us to walk with humility, not arrogance or hubris, before God or, if we aren’t monotheistic, the gods and invisible forces that are above us. 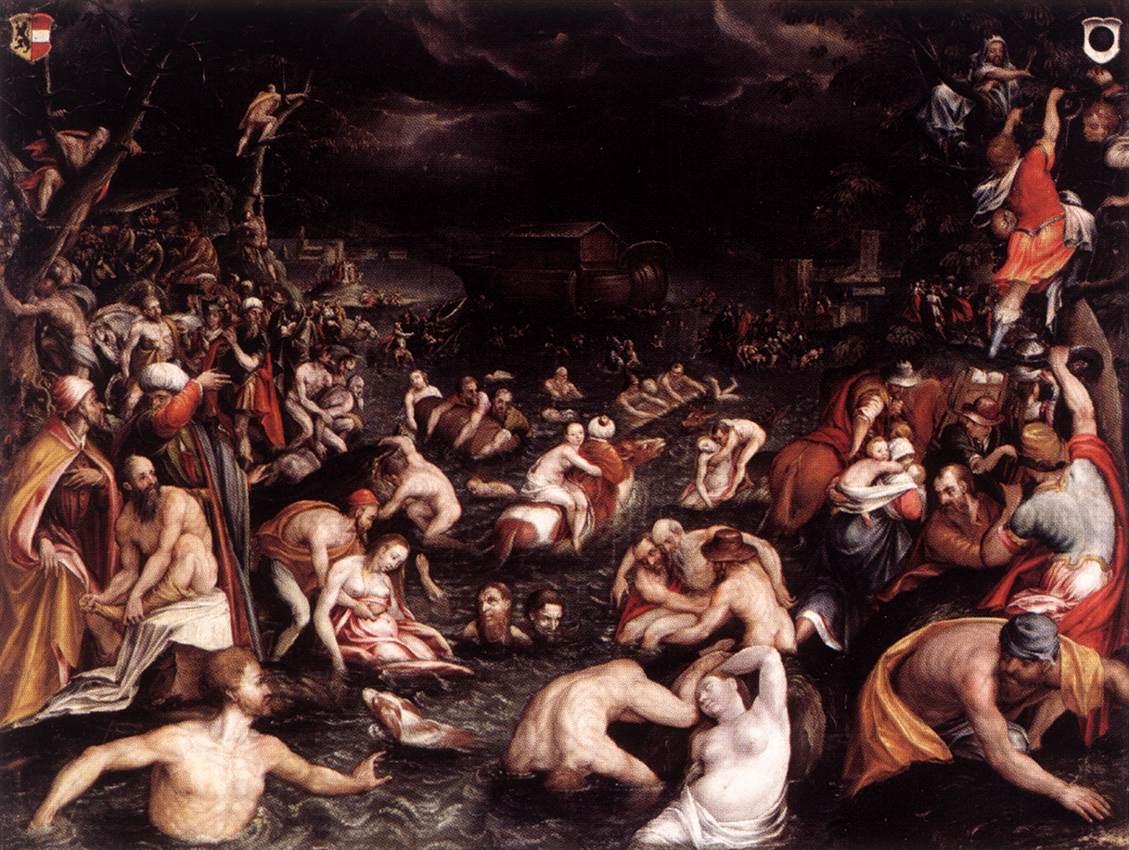 Secondly, we need to grasp that Extinction Rebellion and the science of the status quo are really two sides of the same coin, although they appear diametrically opposed. Whereas the latter can only conceive of an existence of plenty that runs on forever, in which science cures cancer, and people live to 150 years old, and so on, the former see that the whole world order needs changing and that this second flood cataclysm needs to be prevented.

The latter is hopelessly complacent and smug, the former desperate and earnest. How are they two sides of the same coin? They are two sides of the same coin because at root they both embrace the same philosophy: The “complacents” think nothing and no one can interrupt their “progress,” whereas the rebels believe they have the power to prevent the second flood through their own political machinations first and foremost, and possibly with some science second (new greener technologies). In short, mankind is entirely able to control the situation; both are saying this, one passively, one actively.

The final thought, then, about the Great Flood that engulfed the world all that time ago is to ask, why? Humans didn’t will it or want it, and only one—with his family—anticipated it. Why did God destroy the world? This, too, is a highly unpalatable thought.

In Genesis 6:5, we learn that “the Lord saw that the wickedness of man was great on the earth, and that every intent of the thoughts of his heart was only evil continually.” My point here isn’t to try to institute some facile moral crusade, but to ask, in the age of social media and mass communication on a scale barely conceived of in the past, how do human beings seem to you?

A Lot of It About

There are many, many people doing very good things to help others, but if one takes a snapshot of the world as it is, I think the word “evil” would appropriately describe it. As Pink Floyd commented on being “down and out” in their ’70s album “Dark Side of the Moon”: “There’s a lot of it about!”

Why, as I write this, Turkey has just invaded Syria and attacked the Kurds; doubtless for its own “good” reasons, but the reality seems to be that the world is constantly throwing up aggressions of one sort or another, if not here, then there and elsewhere, too.

In some sense, the Flood myth captures for us now that sense that—as with that other great topic, Armageddon—we can be distracted from our own personal evil and divert all our attention onto the big cause that is the “problem,” which at the same time avoids our own responsibility for the state of the world. 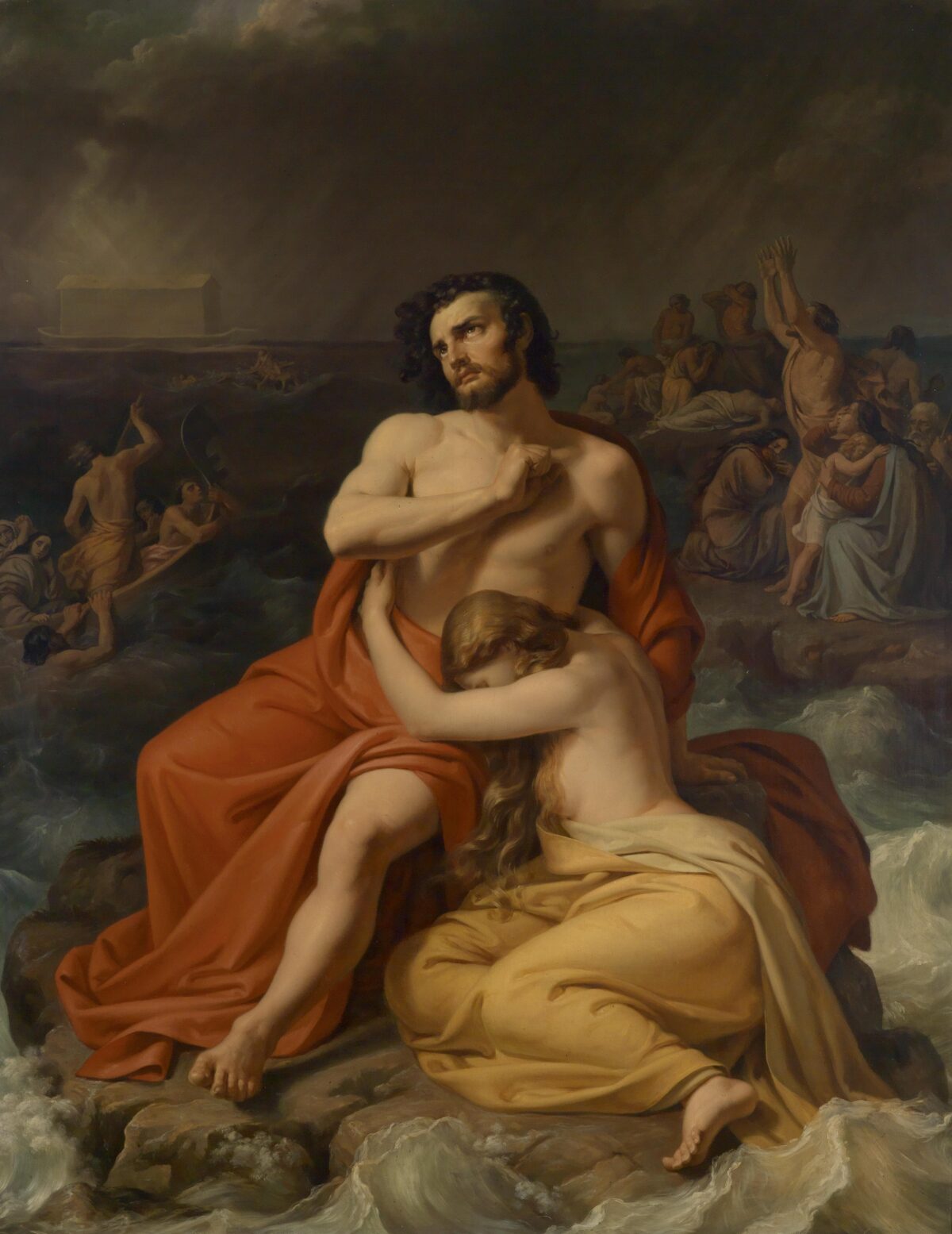 For the myth of the Great Flood reminds us that we are not in control, and that there is a higher power, and we are answerable to it. Indeed, it seems as if freedom of the will is of a paramount importance in the spiritual cosmos beyond where we can legitimately probe.

Noah warned the earth of what was coming, but they didn’t believe him—eating, drinking, and marrying were clearly much more enjoyable than considering the destiny of mankind. They freely chose to ignore the warnings, and then Noah  entered the ark.

Where does this leave us? Is the warning from Extinction Rebellion and the pro-climate change scientists really a message from the gods or God, or is it a false prophecy? I don’t know, but there is another great myth relevant here: Jonah preached to Nineveh and the city repented, and so God didn’t destroy it. The hearts of the leaders and the people turned in a different direction from the evil they had been pursuing. If that were to happen, then perhaps a new and spiritual energy might turn the tide, and instead of some socialistic commune of oligarchs telling us what to do, we might all cooperate as free peoples for the common good. And that just might make the difference.

All biblical quotes are from the New American Standard version of the Bible.

James Sale is an English businessman whose company, Motivational Maps Ltd., operates in 14 countries. He is the author of over 40 books on management and education from major international publishers including Macmillan, Pearson, and Routledge. As a poet, he won First Prize in The Society of Classical Poets’ 2017 competition and recently spoke at the group’s first symposium held at New York’s Princeton Club.