The Suspense Between Seeing and Believing

NEW YORK—We know Rembrandt for his colossal masterpieces, for his captivating self-portraits, and for the vitality in every one of his works, big or small. What seems to have deeply fascinated him throughout his life is conveyed quite powerfully, even in one of his very small paintings, “Abraham Entertaining the Angels” (1646).

Rembrandt van Rijn (1606–69) once said that his aim was to observe “the most natural motions.” It is the only documented comment that we have of the Dutch old master describing his art making, but it is enough to confirm what we can sense and perceive in his paintings.

In “Abraham Entertaining the Angels,” we can perceive a gradually unfolding revelation in a calm domestic night scene. It is full of “natural motions” that reveal to us an extraordinary encounter between two human beings and three travelers who just so happen to be angels—one of whom could be God in human form.

This exquisite painting is now on display at The Frick Collection until Aug. 20 for the first time in more than ten years, on loan from a private collection. It is the centerpiece of the exhibition, “Divine Encounter: Rembrandt’s Abraham and the Angels.” It includes three drawings, five etchings, and a copper plate, depicting the Christian subject of Abraham and his various encounters with God and angels.

The Earthly and the Ethereal

Rembrandt lived in a predominantly Calvinist society in the Dutch Republic, when it was popular to depict stories from the Old Testament. He chose to paint images that often relate directly to Calvinist interpretations, especially to the additional notes of the Dutch States Bible, a government-sponsored translation of the original Hebrew and Greek, published in 1637.

Responding to the ambiguities in the biblical text, Rembrandt developed his own interpretations of the events described. Instead of being constrained by the Calvinist prohibition against anthropomorphic representations of God, he approached it as a pictorial challenge. For example, the central figure in “Abraham Entertaining the Angels” could be understood as a representation of God, but is seen as an angel.

He was especially fascinated with Abraham, perhaps because of the emotional intensity and dramatic turning points in the patriarch’s story. 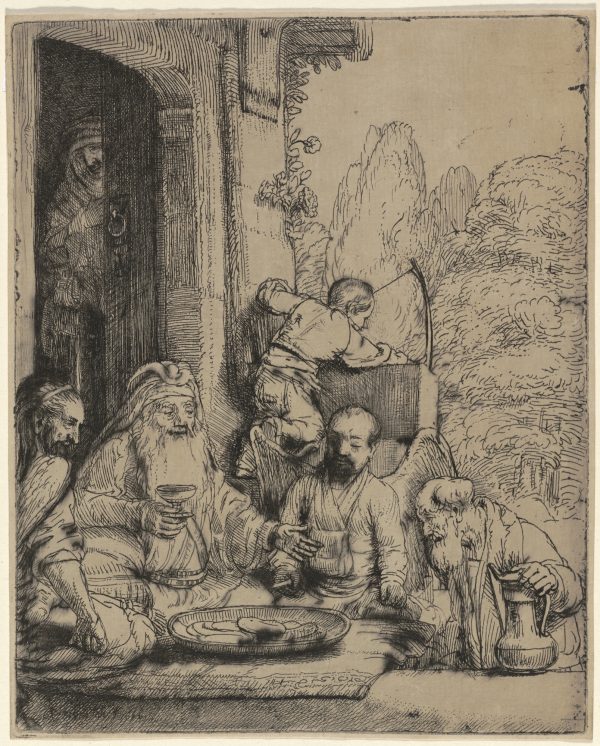 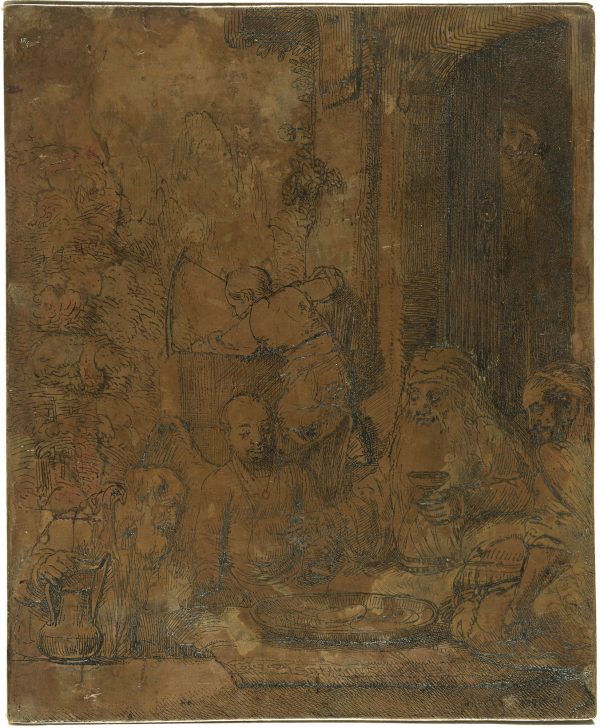 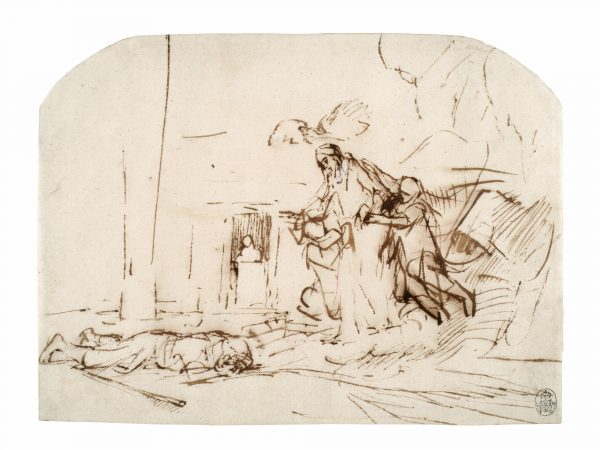 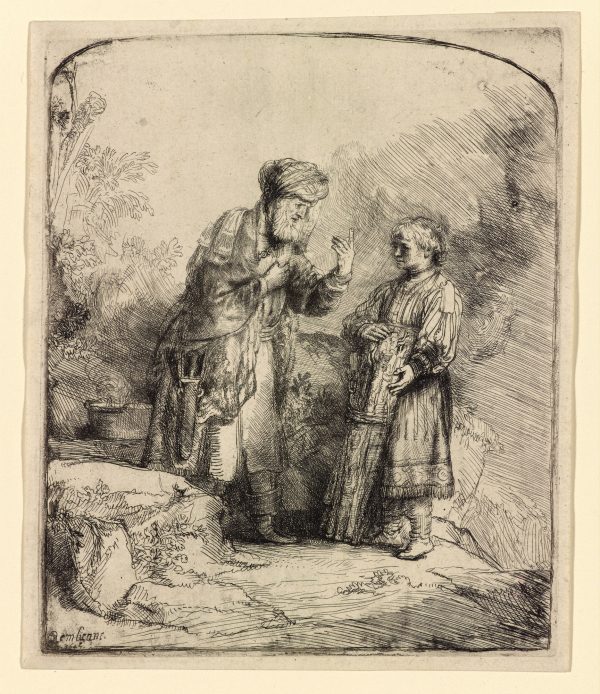 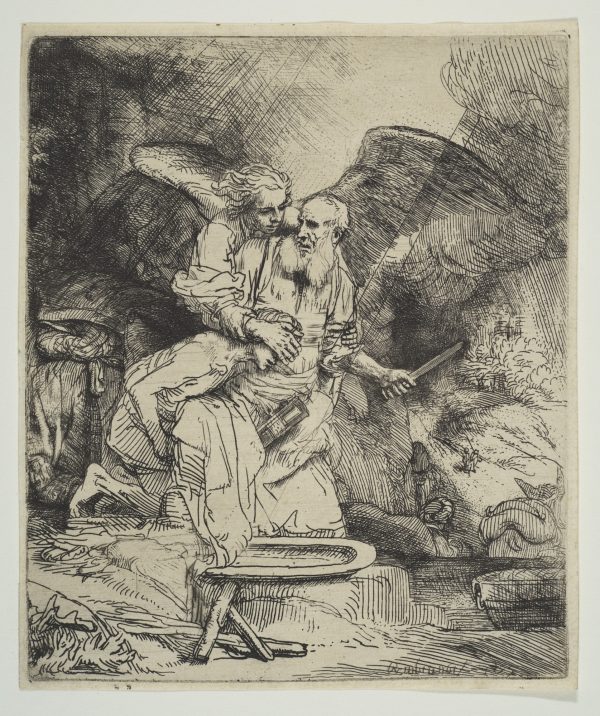 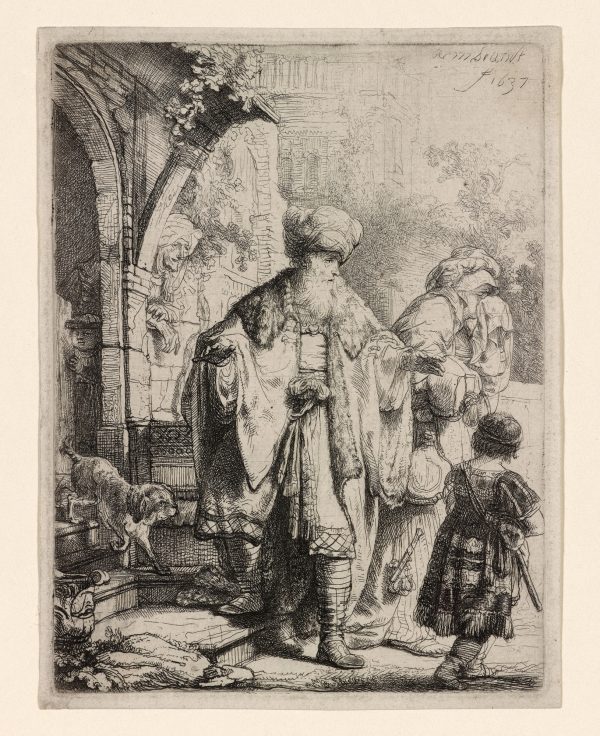 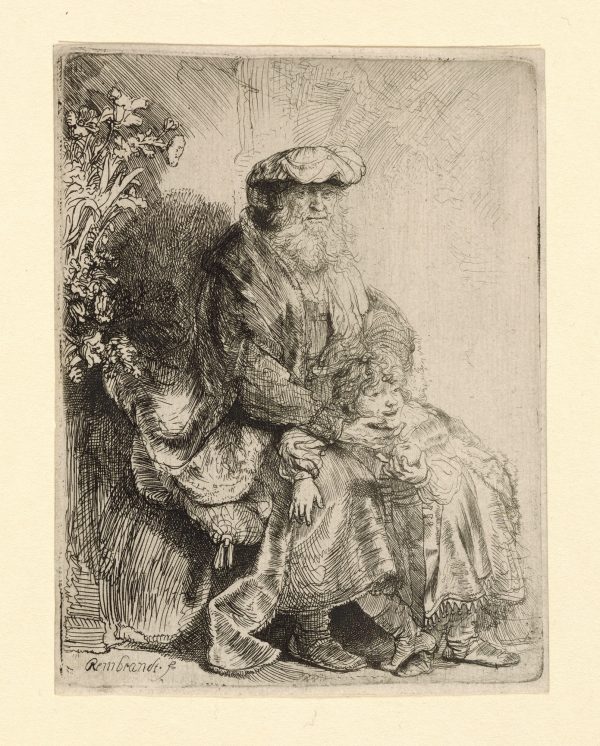 The painting, “Abraham Entertaining the Angels,” depicts the foretelling of the birth of Isaac to the elderly Abraham and Sarah. The passage in Genesis 18 initially states that the Lord appeared to Abraham, but then proceeds to describe the visit of three strangers who were the Lord and two angels in the guise of travelers.

Rembrandt chose to depict the three travelers with angels’ wings. One, with his back to the viewer, reveals a dirty foot peeking out from his robe as he keeps his wings tucked behind him, out of Abraham’s sight. The second angel is eating casually while his wings spread halfway. The angel in the center has his wings fully spread, and the commanding gesture of his arms and right hand are accompanied by a most gentle and compassionate facial expression. He is glowing from within.

It is one of Rembrandt’s “most creative treatments of the divine—a glowing figure who appears to dematerialize from mortal flesh into light before our eyes,” commented Joanna Sheers Seidenstein, the Anne L. Poulet Curatorial Fellow at The Frick Collection, who organized the exhibition. 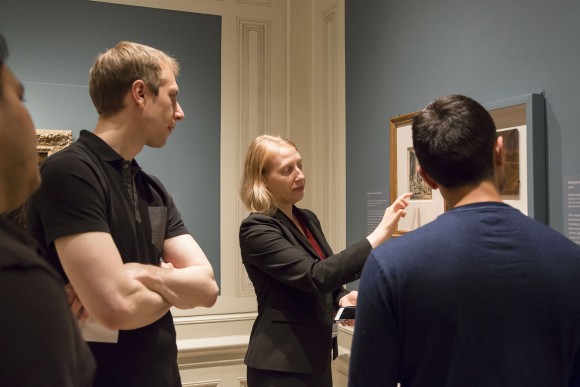 Joanna Sheers Seidenstein, a curatorial fellow at The Frick, gives a talk about the exhibition she organized, “Divine Encounter: Rembrandt’s Abraham and the Angels,” during the First Fridays event at The Frick Collection on June 2, 2017. (Samira Bouaou/The Epoch Times)

The central figure casts light on the faces of the two other angels and, to a lesser degree, on Abraham’s face. Abraham is seen suspended in mid-action, holding a pitcher and a bowl. His impassive facial expression suggests he has yet to realize whose feet he is about to clean. His wife, Sarah, standing by the door in shadow, seems to only see mere mortals.

“In Rembrandt’s reading of the story, Abraham and Sarah are both deceived by what they see. They take the three travelers at face value, and the result is doubt—disbelief in the prophetic announcement of Isaac’s birth,” wrote Sheers Seidenstein, in the exhibition catalog.

Rembrandt depicted the presence of the divine in his own way. Ingeniously, he shows how the divine is perceived in various degrees and ways by different people. One wonders, is this what Abraham actually saw, or what he knew in his heart? In the painting, Abraham cannot see the tucked wings of the angel with its back facing the viewer, but he can begin to see the wings of the angel casually eating, and can certainly see those of the angel whose feet he is about to clean. In this way, Rembrandt shows us a progression from what is seen with the eyes to what is perceived or understood intellectually and eventually believed—the possibility of immortal beings in our midst, the presence of the divine or God in everyday life.

It is as if Rembrandt is showing us two realms, of mortals and immortals, in the same place and at the same time—the progression of a revelation, unfolding in a single, calm scene. 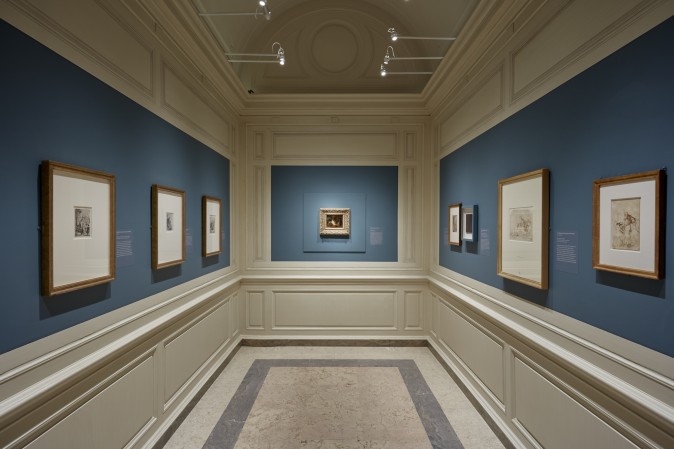