‘The Return of the Prodigal Son’: Love and Forgiveness

A detail from “The Return of the Prodigal Son,” 1773, by Pompeo Batoni. Oil on Canvas, 54 inches by 40 inches. Museum of Art History, Vienna, Austria. (Public Domain)

I recently came across Pompeo Batoni’s “The Return of the Prodigal Son” and was immediately struck by the care and warmth between the two figures in the painting. What might this painting and the story it represents provide for us today?

Pompeo Batoni and the Grand Tour

Pompeo Batoni (1708–1787) has been described as Italy’s “last old master.” During the 18th century, he was the most famous painter in Europe and dominated Italian portrait painting. He was also well-known for religious and allegorical paintings.

During the 18th century, the Grand Tour, which was a rite of passage for wealthy young men, was very popular. The youths traveled throughout Europe to gain a deeper connection to their traditions and cultural heritage.

Many wealthy patrons on the Grand Tour commissioned portraits from Batoni. The artist flattered his sitters by depicting them in a grand historical scene with historical dress. In a way, these portrait paintings became physical manifestations of the patron’s connection with tradition.

Alongside his portraits, Batoni’s allegorical and religious paintings were also highly prized. He painted scenes that exemplified Western culture. His painting “The Return of the Prodigal Son” depicts a biblical parable that shares principles of the Western traditions embodied by the Grand Tour. 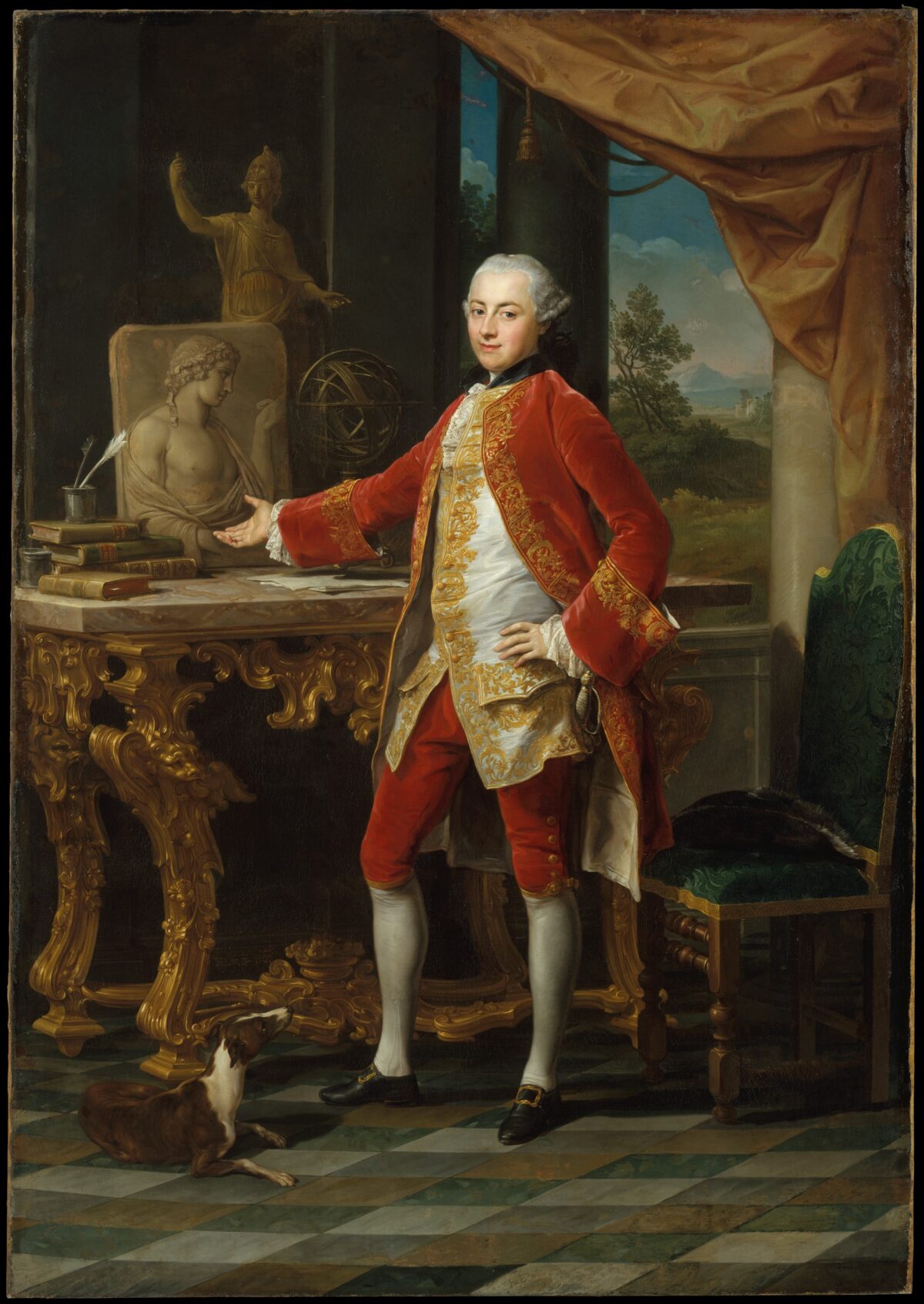 Parable of the Prodigal Son

Jesus tells the parable of the prodigal son in Luke 15: 11-31 (NIV). The story introduces a father with two sons.

The younger son requests his inheritance so he can travel, and his father agrees. But after the young son gathers his possessions and leaves for a distant land, he squanders his wealth.

A terrible famine terrorizes the distant land, and the young man finds that he needs to work; he ends up tending pigs. As times are so hard, he gets so hungry that he even eats pig feed. He decides to return to his father.

Upon seeing his son returning, the father runs to him and embraces him. The young man says, “Father, I have sinned against heaven and against you. I am no longer worthy to be called your son.” But the father rejoices: He gives his young son a robe, a ring, sandals, and a homecoming celebration, stating, “For this son of mine was dead and is alive again; he was lost and is found.”

The older son, however, refuses to participate in the celebration. Despite his obedience to his father, he believes that his father is favoring his younger brother. The father pleads with his older son to recognize and appreciate all that he provides for him and to also celebrate the return of his younger brother. 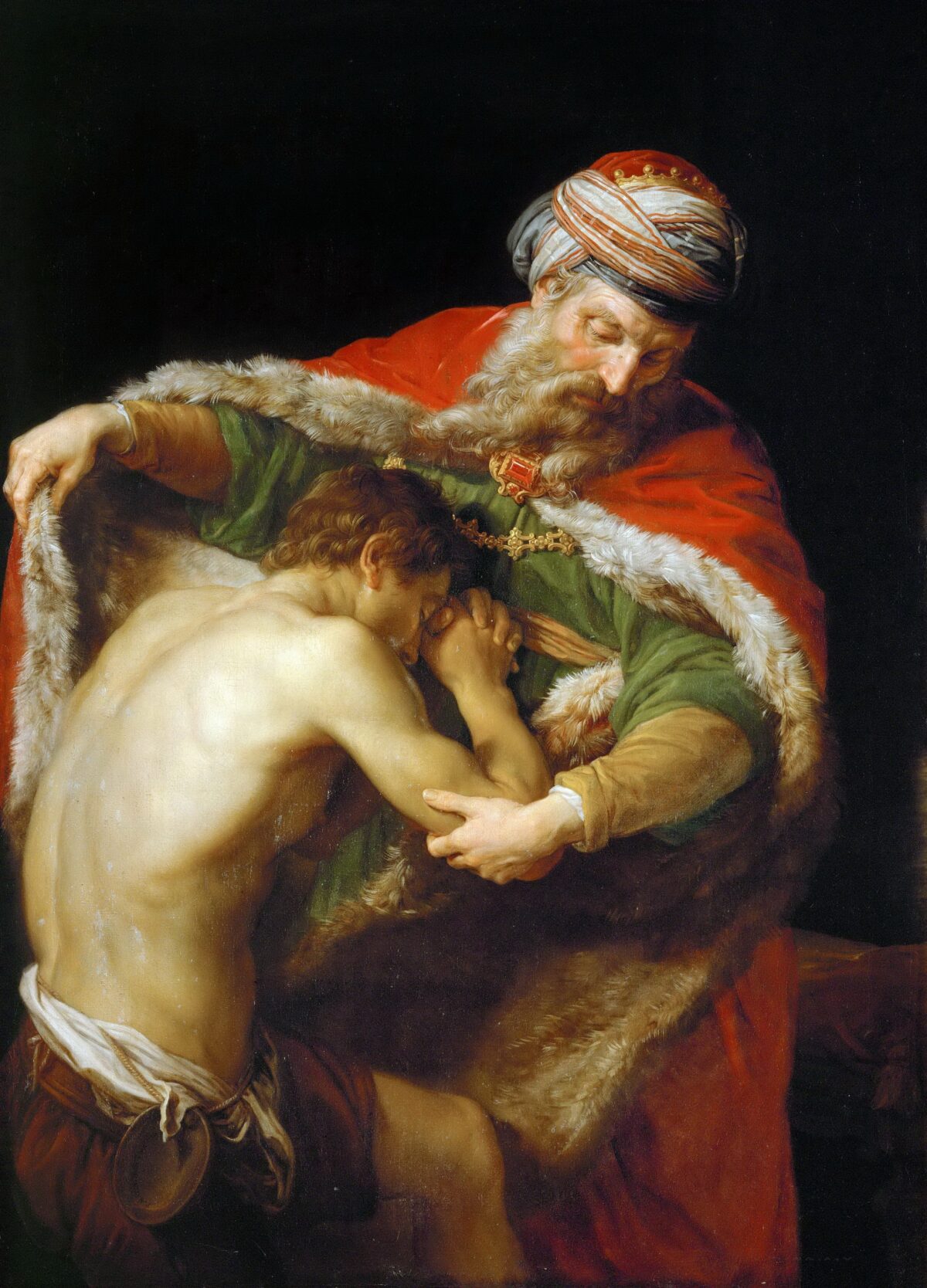 “The Return of the Prodigal Son,” 1773, by Pompeo Batoni. Oil on canvas, 54 inches by 40 inches. Museum of Art History, Vienna, Austria. (Public Domain)

Batoni and ‘The Return of the Prodigal Son’

Batoni depicted the moment the younger son returns to his father. I believe this to be the moment the son falls to his knees and says, “Father, I have sinned against heaven and against you. I am no longer worthy to be called your son.” The father takes his son’s elbow to help him up, and he goes to cover his son’s bare back with his robe.

Batoni depicted only the father and young son in his composition. Though there are just two figures, Batoni maintained the father as the primary focal point through several compositional methods.

First, the father has a higher placement in the composition. A hierarchy of importance is suggested between the father and his young son since the son kneels and makes himself lower in the presence of his father.

Next, there are more rendered details on the father than on the young son. The father’s clothing has an array of textures: He has donned gold and jewelry and has textured fur and a velvety robe. The son is depicted with a bare back and a simple peasant garment to cover himself. The details and textures make the father a more important compositional figure than the son.

Finally, Batoni used color intensity to maintain the father as the primary focal point. The father’s garb is much more colorful than the son’s. Batoni incorporated the complementary colors of red and green into the father’s clothes. Complementary colors are believed to be colors that naturally contrast one another and thereby hold our gaze longer than an area of lower contrast like the simple browns of the son’s clothes.

The two sons approach the values of love and forgiveness that the father represents in different ways. The young, desiring the pleasures of life, steps away from traditional values and suffers immensely. It is only upon the return home that the young son is given a ring, a robe, and is celebrated for being “alive again”; that is, it is through these traditional values that the young son is truly alive and prospers.

The older son is also tempted by the pleasures of life. He wants more from his father. In other words, he feels that the love and care he has received have not been enough. His desire for more begins a journey down the destructive path of jealousy.

What the older son doesn’t realize is how much his father has already provided him. He never disobeyed his father; that is, he never strayed from home, and therefore was always wealthy. But without having embraced the values of love and forgiveness—the spiritual underpinning of life—he was never truly alive.

Traditional principles become tradition because they prove to be consistently beneficial to the people who engage in them. The Grand Tour encouraged traditional values by exposing youths to the outward manifestation of Western culture: beautiful architecture, artwork, and the best refinements that each country toured had to offer.

Let’s not forget the best of the inward refinements that Western culture offered: the traditional principles of love and forgiveness. With these in mind, maybe, like Batoni, we can be exemplars for reinvigorating these values—a Grand Tour of what it means to be loving and forgiving. Historically, these principles have been beneficial to us when we accept and practice them.

Now when I see Batoni’s painting, I am reminded to forgive and care for the people who are only trying to find their way in their own stories. It reminds me that I don’t need to wander away from these values in search of life’s pleasures, refuse to celebrate with those who seem to have more than I, nor attack people who are acting out their jealousy and entitlement. I need, instead, to embody and encourage love and forgiveness, and perhaps I too can physically manifest my connection to tradition.

All biblical passages are from the New International Version.