The Rapturous Union of Heart and Mind

A detail from “The Rapture of Psyche,” 1895, by William Adolphe Bouguereau. Oil on Canvas. 82 ¼ inches by 47 inches. Private Collection. (Courtesy of Art Renewal Center)

What does it mean to authentically love? The term “love” is often thrown at any object that provides us the slightest pleasure. We love our spouse, our children, our favorite movie and song, and even the latest chicken sandwich. We certainly don’t mean the same thing in all cases. Maybe French painter William Bouguereau can offer us insight into what it means to love, with his painting “The Rapture of Psyche.”

Let’s first take a look at the myth of Cupid and Psyche, thought to be initially recorded by the Hellenistic philosopher Apuleius, who lived in North Africa.

The story begins with the introduction of a king and his three daughters. The youngest daughter is named Psyche (Soul). The two older daughters marry princes, but Psyche’s beauty is too intimidating for most suitors. People gather to watch the girl whenever she walks through the city and write hymns glorifying her beauty. Some even compare her to the goddess of beauty, Venus.

This comparison angers Venus, and so she calls for her son Cupid (Love) to use his arrows of love to make Psyche fall in love with a hideous beast. Then people will again praise Venus instead of Psyche.

Cupid agrees and first makes himself invisible before he visits the sleeping Psyche. When he touches her heart with his arrow, she suddenly opens her eyes, startling him and causing him to accidentally stick himself with his own arrow. Struck by Psyche’s beauty, Cupid gives Psyche an antidote to the curse before returning to heaven.

Venus realizes that Psyche has escaped the curse and decides that she herself will place the curse on Psyche. Venus makes sure that no suitors will come to visit Psyche, so Psyche’s family takes her to an oracle that states:

“The princess Psyche shall never wed a mortal. She shall be given to one who waits for her on yonder mountain; he overcomes gods and men.”

The Love of Cupid

Psyche agrees to her fate and begs her parents to give her to the one waiting on the mountain so that she may appease Venus. The one waiting is assumed to be a monster. Psyche is indeed taken to the mountain, but there the West Wind carries her to a beautiful, secret valley, with a palace greater than her father’s.

There, a voice calls out to her: “All that you see is yours, gentle high princess … Fear nothing; only command us, for we are here to serve you.”

Psyche realizes that her husband may not be a monster, but a beneficent power with the voice of a god. Psyche requests to see her suitor’s face but is denied. The voice replies:

“Never doubt me, dearest Psyche … Perhaps you would fear if you saw me, and love is all I ask. There is a necessity that keeps me hidden now. Only believe.”

Psyche is content for many days until she begins to miss her family. She asks her husband to see them, and he asks the West Wind to bring some of her family members to see her. When her two sisters arrive, they become envious of the riches Psyche enjoys. Her sisters remind her that she has married a monster and that she should kill him with a dagger as he sleeps at night so that they can all enjoy the riches.

Psyche is horrified, yet she follows her sisters’ plan. She takes a dagger and lantern and waits for her husband to fall asleep. When he is asleep, she puts the lantern up to his face, only to see the beauty of a god. She is so overwhelmed with worshipful feelings that she leans in to look closer, dropping oil from her lamp onto Cupid. He awakens and says in grief, “O doubting Psyche,” before flying away.

Psyche, filled with sorrow, tries to follow Cupid but is unable to. When she looks around, all of the beauty of her garden and palace has disappeared. She sadly leaves in search of Cupid.

The Search for Love

Psyche is encouraged by Ceres, goddess of the harvest, to go to Venus and request forgiveness. Psyche goes to the temple of Venus, offers a prayer, and Venus—still jealous of Psyche’s beauty—produces a series of impossible tasks for her to complete in order to see Cupid again. These tasks include separating heaps of grain, beans, and lentils in one night, obtaining golden locks from a flock of fierce sheep, and obtaining some beauty from Proserpine, the wife of Pluto, god of the underworld.

Psyche receives help to accomplish each of these tasks. Ants help her organize the grain, beans, and lentils. Water nymphs tell her the secrets of obtaining the locks from the sheep, and a voice provides her the secrets of visiting the underworld and returning to earth again.

In her last trial, however, the voice also tells Psyche to not look at the beauty in a box provided by Proserpine lest Psyche lose her life. Unable to avoid the temptation, Psyche does look and is overcome by the spell. She falls into a deep sleep.

Cupid, having recovered from his wounds, comes to Psyche’s rescue and revives her. The god flies to heaven, tells their story, and makes a case to the gods to have Psyche immortalized. Jupiter calms Venus with kind words, and when she remembers that anger hurts her own beauty, she immediately smiles again.

Psyche is taken into the heavens, drinks the nectar of the gods, and becomes divine. She and Cupid are never parted again.

For me, the myth of Cupid and Psyche isn’t a romantic love story. Instead, it reveals some very interesting aspects of the relationship between the beauty of our minds and the love of our hearts. It is necessary to remember that Psyche represents the human soul, mind, or spirit, and Cupid represents love. Let’s take a close look at several aspects of the story.

First, Cupid remains hidden from Psyche. Psyche must trust Cupid despite not knowing who or what he is. Maybe this is true for our minds as well. It is not that we must know love absolutely; in fact, perhaps we can’t know love absolutely. Perhaps, instead, it’s just that we need to foster a curiosity about what love is and from whence it comes so that we remain open to it and only then, in time, will it reveal itself to us.

Second, Psyche’s beauty causes Cupid to undo the curse Venus placed on Psyche—the curse in which Venus hopes Psyche will fall in love a hideous beast. Is it that the beauty of our minds has the potential to undo our unhealthy desires? Philosophically, the mind is associated with our ability to reason and be rational, that is, to calculate and measure our actions. It would seem that our ability to calculate and measure our actions possesses a beauty that can undo the potential desire for the hideous.

Also, the oracle describes Cupid as one who “overcomes gods and men.” If Cupid is a representation of love, then it is love that overcomes or has power over gods and men. That is, love is a force so powerful that even the gods are overcome by it and are unable to resist it. Thus is the power of love.

Psyche, however, is helped through her trials when she pursues love. It’s not that the trials disappear; it’s that she’s able to overcome them because supernatural forces are helping her. Is this the power of being “overcome” by love?

Our minds can calculate and measure our actions and undo the potential desire for the hideous. Unfortunately, our minds can also rationalize to an extreme, an extreme in which we excommunicate love from our lives and forget to consider and care for those around us. In the story, the absence of Cupid results in the absence of beauty as well. Love and beauty are cohorts: They mutually share space and time. When love is absent, so is beauty, and then sorrow and sadness prevail.

Finally, Psyche ascends to the heavens and becomes immortal in her union with Cupid. Love saves her from herself and forgives her mistakes, and she is allowed to ascend into the rapture of the immortal heavens because of her pursuit and sacrifice for love. The union between the beauty of the mind and the love of the heart may result in a heavenly rapture that transcends this earth.

Perhaps this is why Plato says: “Therefore I say Love is the most ancient of the gods, the most honored, and the most powerful in helping men gain virtue and blessedness.” 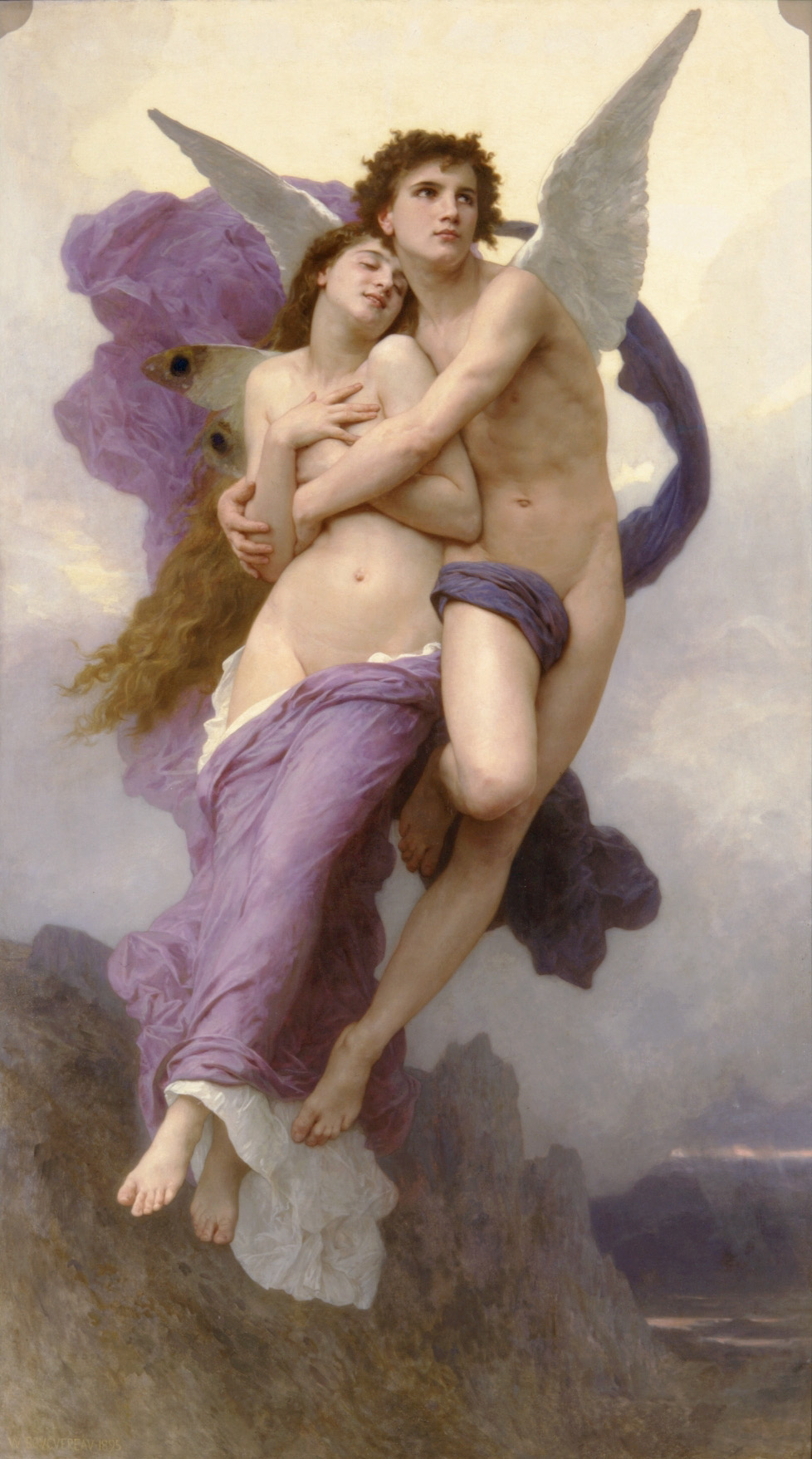 Bouguereau and ‘The Rapture of Psyche’

Bouguereau presented the moment in which Cupid awakens Psyche and takes her into the heavens. This is her ascent to the divine. The two figures are diagonally composed as moving from bottom left to top right of the picture plane, and the flow of the drapery and hair helps reinforce this movement.

The soft yellows and pastel violets provide a complementary contrast that is not jarring but pleasing to the eye. An atmospheric perspective keeps the background elements in the distance so that they play a supporting role to the ascent of the two figures. Everything is organized and composed with a soft but endearing beauty.

What’s most interesting to me, however, is the body language of the two figures. Psyche, with her eyes closed and gently smiling, holds onto herself: She embraces her heart and chest as she experiences the rapture of her ascent. Cupid looks to the heavens and holds on to Psyche.

Is it that our minds are close to the divine only when we allow love to carry us to it? Should we, with our minds, embrace our hearts so that our hearts will learn to embrace others? Is it only possible to realize our full potential when we cultivate both our hearts and minds?

Here, I am reminded to caution myself against the hideous and keep love close, to stay focused and surefooted in love despite my hardships, and to trust that the power of love will make me acceptable to the heavens. I am reminded to avoid being too rational or too emotional and let my heart and mind harmonize; I am reminded to let love carry me forth in this journey called life.